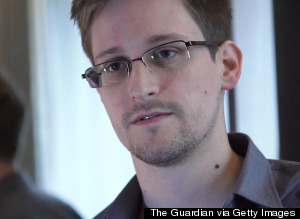 The U.S. has become refuge for many dissidents and others accused by various despotic regimes of treason and crimes against the state or God. Thus, it is indeed ironic that now Washington has taken up hunt for Edward Snowden with zeal of regimes that it frequently criticizes for human rights abuses and oppression of political opponents. Has the rush to apprehend Snowden sacrificed U.S. standing as champion of the politically oppressed and the rule of law?

Snowden's Alleged Crimes Are of Political Character & Do Not Oblige Extradition:

Extradition may be requested for Snowden but it may also be refused on the "political exception" principle regardless of whether a treaty is in place. Most extradition treaties specifically exclude the obligation to return those wanted for a political offense. Snowden could also be viewed under international law as person who could be subject to political prosecution and thus to be afforded special protection and potential asylum. (Washington's reported failure to fully cooperate with a UN-appointed Human Rights Special Rapporteur regarding the Bradley Manning/Wikileaks case may become pertinent.) This would be especially relevant if Snowden was labeled a traitor and thus possibly subject to potential capital punishment. Nonetheless, authorities in states have frequently detoured laws and the judiciary to serve whatever explicit and/or implicit political deals may have been woven.

Pressure over Rule of Law & Human Rights Principle: Extradition law has persisted like a reptile from another age in frequently giving deference to sovereigns over individual rights even when such may be in direct contradiction to Constitutional law and fundamental principles of human rights. Thus, presumably a requested country could opt to do what is not required by treaty or generally accepted norms and even bypass its own legal protections generally afforded to any person of a crime under its own domestic laws. (While I have significant personal experience with extradition procedures and abuses, the most recognized expert is the highly respected international jurist Professor Cherif Bassiouni: "International Extradition: United States Law and Practice.")

Washington has persisted with both overt and behind the scenes pressure, and some suggested threats. The longer term cost to U.S. strategic interests as human rights and rule of law champion are most likely to exceed any presumed damage to national security inflicted by Snowden's breach.

Do Not Dare to Challenge Washington Authority-Orthodoxy: Official Washington appears to be blinded in its obsession to make an example of anyone who dares cross it. Whether we opt to see Snowden as traitor, hero, or perhaps adrenaline-induced self-promoter, official Washington appears most focused on the punishment over any harm or victims of Snowden's alleged crime. More so, any one of us who dare challenge Washington orthodoxy is likely to bring retribution direct or indirect that is intended to deliver the message not to question authority. We may never be able to prove the motive to silence and intimidate, especially if it draws upon the collaboration of the armies of private contractors/corporations who have woven their profit interests in the proliferation of the security and intelligence enterprise -- something that then-President Dwight D. Eisenhower warned against as the "military industrial complex." This perhaps is the greatest danger to America's cultural and Constitutional principles.

Has Washington Already Proven Snowden's Allegations? National security has been applied as a catch-all justification in both the current and previous post 9-11 administrations. Is this the inevitable consequence: "absolute power corrupting absolutely" regardless of personality or party? The call to silence has extended beyond hiding the details of an intelligence program to now concealing the existence of any such programs, even if they may contradict our Constitutional safeguards and/or the rule of law. How can we, our press and/or civil society question/challenge government intrusions if it is a national secret that such even exist? The American citizen appears to be denied the necessary knowledge or possible standing whether in context of elections to executive and/or legislative branches or capacity to challenge before the U.S. judiciary. The umbrella rationale applied by the government appears to be not only national security and we are doing it for your own good, but do not ask what we are doing in your name.

As a direct consequence of Snowden's revelations, the NSA, the administration and U.S. Congress rushed with a flurry of information about what they were doing. Of course it may have been selective, but a U.S. citizen might rightfully ask, why did it take a Snowden for us to know even of the existence of such programs that were now being identified in Congressional hearings or executive press conferences? His supporters might rightfully ask, did Snowden's "betrayal" deliver a service of at least informing of the existence of certain internal intelligence programs that might over time garner a more informed debate among U.S. citizens, their representatives and the judiciary?

Empowering US Adversaries? Washington's search for Snowden may have also blinded it to the consequences in relationship with allies and adversaries. Presumably acting upon a bad U.S. intelligence tip and pressure, several U.S. European allies may have violated international diplomatic standards/laws. The presidential plane of Bolivia's Head of State was prevented from flying across their air space, presumably because Edward Snowden was believed to be on board. President Morales' plane was effectively forced to land in Austria, and to the embarrassment of Washington and the allies involved, Snowden was not found. (Planes with such diplomatic standing are subject only to imminent danger as cause for being diverted.) At least empowered by Washington's faux pas, now it appears that the leaderships in Cuba, Venezuela, Nicaragua as well as Bolivia are prepared to offer Snowden asylum. These states are at transformative junctures. The U.S. has been presented to their citizens as threat, real or imagined, particularly inclined to dominate economically, politically and militarily. The domestic opposition to these at times authoritarian-inclined regimes has been routinely accused of being lackeys of the superpower to the North. The Snowden affair may only undermine the opposition and proclivity for more open and free societies.

The biggest chuckle at Washington's expense may have come in Beijing just as the U.S. was challenging China's own broad data mining and spying programs employing the world-wide web. It was also exposed that the NSA has bugged the diplomatic and trade offices of the US's European Allies and the EU.

Reports that Washington may sanction states that offer Snowden asylum could only compound the damage to the U.S. Snowden now is more symbol, and the presumed harm to U.S. national security has already been delivered. The damage now may only be further self-inflicted in terms of international relationships and standing as the globe's most free country. Anyway, will Washington pursue sanctions against Moscow where Snowden has effectively received the most critical refuge and opportunity to seek further asylum?

In our American tradition as the most free and open society respecting individual liberties, I do not find it a convincing defense for Washington to claim that other states do it and/or that such is necessary for national security without opportunity to question or challenge. At least part of Washington's position may be valid, but we have no way of knowing. We need an informed debate -- which means access to substantially more information about which programs exist and how intrusive they may be. There must also be an opportunity to challenge the official version of facts as well as such programs. Further, let's not allow Washington to be projected as the lone or most abusive in terms of our personal information. Tentacles extend into our computers and homes from states with worse records as well as political profiles and more than ever the distinction between private enterprise and government authority has become blurred within the U.S. and globally. Intrusion, even more so than free flow of information recognizes few borders. The debate will increasingly have to take on an international character whether in the framework of an institution such as the United Nations or some yet unidentified effort of global citizens who find the space for free and open flow of information increasingly strangled.