Hanukkah is the eight-day holiday commemorating the miracle of the re-dedication of the Temple in Jerusalem at the time of the Revolt of the Maccabees in the 2nd century BCE. One of the major observances is the kindling of the lights in an eight-branched Hanukkah Menorah, also called a Hanukkiah. As in the rest of the Diaspora, this Jewish holiday is celebrated with great enthusiasm in Jamaica. 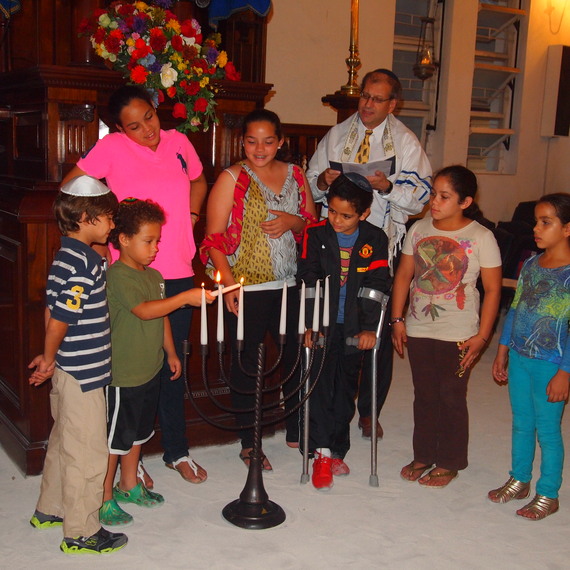 Spanish Portuguese Jews have celebrated this holiday in Jamaica since our arrival here in Port Royal more than 360 years ago. German/English Jews have also celebrated the Festival of Lights since their arrival here in the 18th century. Today, we gather together as a united community to light the Hanukkah menorah and celebrate the perpetuation of our identities as Jews on this beautiful island.

As Jamaican Jews, we have been enormously appreciative of the religious freedom that we have been granted on this glorious tropical island. We came here as refugees fleeing the Spanish and Portuguese inquisitions where we were forced to convert to a religion against our wills and then persecuted for even the slightest suspicion that we were not zealously upholding the faith that had been forced upon us. We escaped from the Iberian Peninsula in order to return to the faith of our fathers and mothers. As a result, we appreciate the freedom of religion that has been a cornerstone of the Jamaican civil religion for so many years.

We pray that if we Jamaicans can continue to mature politically as well as spiritually, we can build a strong social contract between those of us who are leading and those of us who are being led. The results, we pray, will bring us both positive liberty and negative liberty, as Isaiah Berlin explained this concept. A negative liberty is a condition in which we are protected from the arbitrary exercise of authority such as tyranny, while positive liberty means being given the opportunity to grow and prosper independently without unnecessary restraints.

With such a sad legacy of slavery, all Jamaicans are familiar with the concept of the "Maccabee Bible." In colonial British societies, including Jamaica, mere possession of the Maccabee Bible was considered seditious. Slave owners feared that if their slaves heard sermons about the brave Macabbees who rebelled against the Syrian Greeks, they, too, might try to revolt. Many Jamaicans see the inclusion of these books as a declaration of cultural as well as political independence. Some also link them to Rastafarian beliefs. For instance, Max Romeo starts his 1971 recording of his song "Maccabee Version" with a declaration of Rastafari.

Hanukkah is called the "Festival of Lights," and we are reminded of the miracle of the single cruse of oil that was enough to burn for one day but lasted for eight full days and nights. Jamaicans love the concept of a festival devoted to light. They are fascinated that we use a shamash, an extra candle, to kindle the rest of the Hanukkah candles. This is based on two customs: we should not kindle one light with another; and we should not use the Hanukkah lights for illumination. The candles are there strictly to remind us of the miracles that God performed -- and continues to perform even today. The vast majority of Jamaicans believe deeply that God performs miracles for us in daily life.

It became the custom to feast on Hanukkah and since the miracle of the lights was due to the continued presence of oil, holiday foods were fried in oil -- how Jamaican! Potato pancakes called latkes are eaten as well as doughnuts. Jews, and indeed many Jamaicans, celebrate Hanukkah with games, food, prayers and special holiday study. We give presents for eight nights, although we try not to promote excessive materialism.

Most of all, we celebrate the freedom to practice our religion here in Jamaica, a right we have enjoyed for almost four centuries. The fact that we are still here today is proof enough that miracles are possible.

As Jamaican Jews celebrate Hanukkah this week and Jamaican Christians prepare for Christmas toward the end of next month, we can all agree on the importance of freedom in the full sense of the term. May the Festival of Lights usher in a new secular year of peace, understanding, cooperation and love.

In Pictures: Hanukkah in Kingston, Jamaica