So it's been a little over two weeks since Star Wars: The Force Awakens blew up box office records and people have come back on Twitter and Facebook, no longer worried about spoilers. I've seen the film twice already. The first time was a serious "Oh-my-God-I'm-Watching-Star-Wars-Again" event. The second time around, I was a bit more critical, but still had that excitement. Still had that new movie rush.

Going to the movie really was like going back to that first time I saw Star Wars. It was a feeling I wanted my kids to get as well. After all, this movie represented something larger. It was like being part of a historic moment. Selling that idea, though, proved to be a bit of a challenge.

I was clear from the start: we were going to see the movie as a family.

I bought everyone t-shirts. 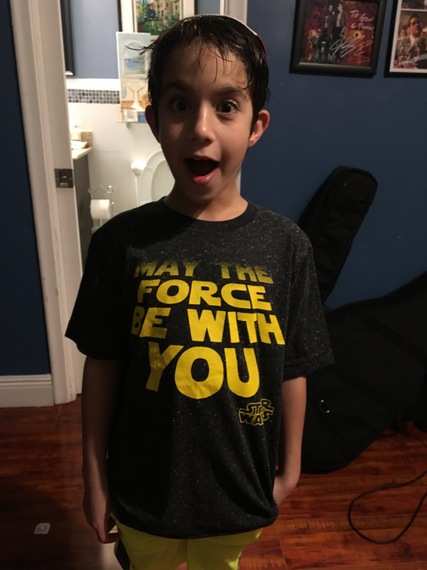 We hummed the theme song in carpool. We played the trailer on repeat. For the most part, they all joined in on the excitement and anticipation.

Everyone, that is, except my 13 year-old daughter.

Granted, thirteen year olds are not the easiest when it comes to joining in on family events, but this one was being particularly contrary. She hadn't watched the older films when I insisted everyone else watch them. She hates science fiction.

And she flat out refused to see the movie.

Thus began the Great Star Wars Battle of 2015. The more she put up a fight, the more I dug my heels in.

I tried being rational: "This is part of your education," I explained to her.

I tried pulling rank: "You have no choice here. We are seeing it as a family."

I tried guilt: "Do you know how important this is to your mom? Don't you care about that?"

It didn't help that her siblings and my husband started taking sides. Bets were placed to see who would give in. Would I force her to join us, angry and muttering the whole time? Would she relent? Realize it was a lost cause?

A part of me knew that he was right. In the greater battles of parents vs. teenagers, this one was definitely not worth it. But I was too entrenched in the fight. Too deep in my insistence. Backing off would be giving in, and that wasn't going to happen.

Our tickets were for Saturday night. By Saturday afternoon, she started to make peace with it.

But I saw this as a break in the wall. The caving of her defenses. I was winning this.

"You're going and you're wearing the shirt."

My husband rolled his eyes as my daughter and I went at it again.

"Why do I have to wear the shirt?? I'm going to the movie! Isn't that enough?" she yelled.

"Wear the shirt! I bought it!" I yelled right back.

I didn't give in. Again, in retrospect, it was silly of me. But at that point, I was going all the way.

On Saturday night, as we were getting ready to leave, she came out of her room wearing the Star Wars shirt. I did a little dance.

"I'll wear the shirt and go to the movie. But I am NOT going to be in any of the pictures," she said.

I let that go. After all, she was joining us. She was wearing a Star Wars shirt. My older children settled up their bets. This was clearly a win for Team Mom.

We left to the theater and that's when I started getting nervous. Because what if she hated it? What if it was terrible? For a fleeting moment, I doubted myself. It was only fleeting, though.

She would love it. I was sure. And it had nothing to do with Star Wars or Science Fiction, either. I knew she wouldn't hate it because it was a JJ Abrams film. And as the lights went down, I silently prayed that he would deliver.

The rest, of course, is obvious.

She loved the movie. Thanked me for taking her. Said it was really good. She asked questions and I filled her in. She loved Rey. Loved Han. Loved the effects. (Though she thought the transitions between scenes were terrible. I explained that they were "retro." She still felt they could have done better.)

In the Great Star Wars Battle of 2015, I clearly won. But there was no gloating on my part. No nasty, annoying, mom-like "I told you so's." My victory played out in a much more subtle way.

I took my family to see Star Wars. We shared a moment in history. We swapped theories. We argued and critiqued.

But most important, my 13 year old daughter proudly took pictures with her geek mom and siblings and friends. 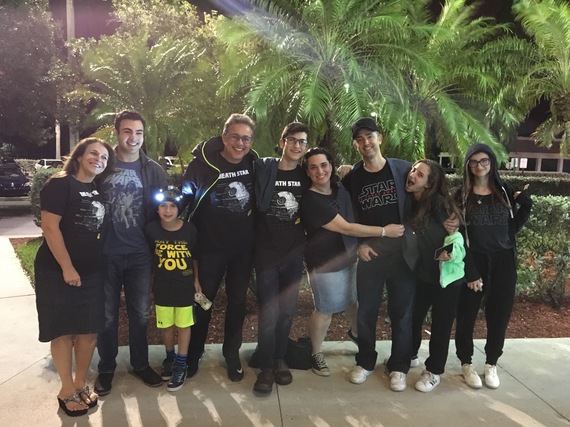 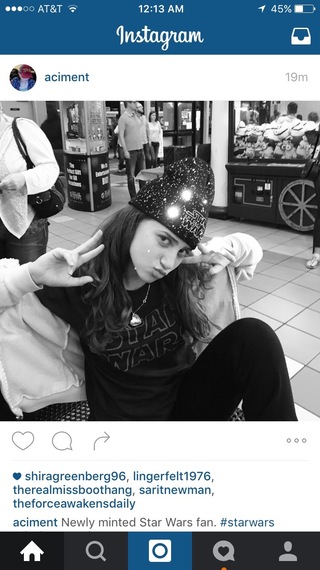