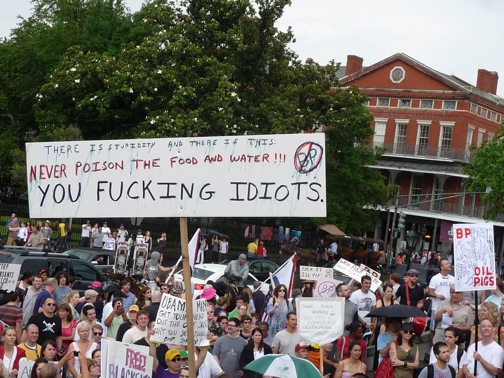 More than 1,000 protesters gathered across from Jackson Square in New Orleans today (10,000 in Fox News numbers), this YouTube speech by activist Ian Hoch seems like something John Goodman's Creighton Burnette would say in a quality rant. My favorite moment? "I don't even know if I LIKE fishing!" 5 minutes in. Several chants of "Ian for governor" can be heard at the end, and in Louisiana politics stranger things have happened.

The Stop the BP Oil Flood rally featured speakers Phyllis Montana-LeBlanc and Dr. John, both who have been featured in Treme, and Spike Lee, Maggie Gyllenhaal and Tim Robbins were in attendance. Speakers included George Barisch of the United Commercial Fishermans Association; Evan Wolf, a Louisiana National Guardsman involved in the cleanup; Dean Blanchard of Dean Blanchard Seafood; Lower Mississippi Riverkeeper Paul Orr; Cliff Johnson of the Southeast Louisiana Shrimp Alliance, Prof. John P. Clark and Rex Dingler of NoLa Rising. Matter of Trust discussed hair booms which hopefully will be approved sooner rather than later, and Hazardous Waste Operations and Emergency Response Trainer Roger Ivins offered free training to anyone interested in coastal cleanup. As background music in the video, you can hear the Nachez calliope playing on the Mississippi River behind the rally.

Details on the event are available at http://www.murderedgulf.wordpress.com and our NewOrleans.com photo gallery HERE.