ROANOKE, VA - The state of Virginia is leading the way to a new, greener economy for the country. The first ever wind-powered executions were attempted Tuesday at a wind farm outside Roanoke, officials say. [PHOTO BELOW] Sheriff Edward Carey oversaw the executions to much fanfare. Carey gave a brief statement preceding the inaugural event. In it he explained, "Careful calculations have been made, and we are almost certain that once the windmill blades reach a speed of 60 mph, the convicts' heads will pop right off. This will be the cleanest and greenest energy ever used to take a man's life. And our dedication to a green execution does not end there. After the deed is done, the heads will be collected, ground up, and used as fertilizer on the beautiful tobacco field you see behind you. All it would take is a mere 34 executions per week to fertilize that entire field."

As the demonstration continued, two of the three convicted murderers strapped to the wind turbine blades saw a quick end as expected. However, the third inmate's head proved stubborn, and the man yelled angry offensive words at the crowd for the entire thirty-three minutes. Apparently no one had informed him that there were children in attendance. Eventually, with the convict still alive but quite dizzy, a nearby tractor was brought in to finish the job. Sheriff Carey has given his word that the proceedings will be fine-tuned by the next execution. 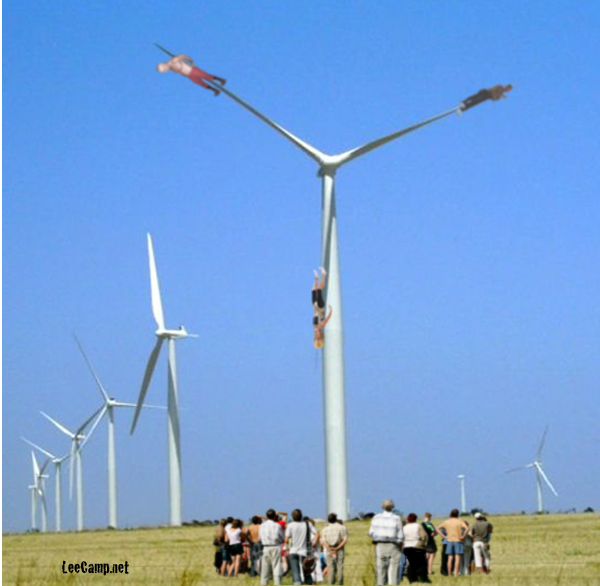