A true hero of our LGBT movement died last week when Danny Garvin passed away after a struggle with hepatitis and cancer.

Danny helped give birth to our liberation when he fought in the Stonewall uprising. He was there that first night and several nights after, fighting in the streets, battling the police who had raided the Stonewall Inn.

At the time, Danny was a homeless youth. Many of the warriors who ignited our movement that night were homeless LGBT youths, who then, as now, made the West Village their home.

Over the past few years I've had the honor and joy of getting to know Danny as he has volunteered to advocate for the homeless LGBT youths of the Ali Forney Center. Last year he wrote to me about why he had such empathy for our kids:

I wish there had been something like the Ali Forney Center for me when I was on the streets. Maybe I would not have had to live so many nights of out lockers in Port Authority on 42nd St. Or sell myself for 8 dollars to have a bed to sleep to in and a place to shower. Just some place to be hidden from the world until the next day when it would all start all over again. I know I would have robbed less food from stores just to get something to eat.

In 1969, as in 2014, to be open about being LGBT put youths at terrible risk of homelessness. Then, as now, LGBT kids were suffering on the streets. Then, as now, many had to turn, like Danny, to hustling in order to survive.

My first conversation with Danny was painful. We were preparing for a press conference demanding a governmental commitment to the homeless youths of New York City. I asked Danny how the gay world at the time of Stonewall related to the street kids who lived in the Village.

"The respectable gays didn't want to have anything to do with us," he told me. "To them we were trash. They looked at us with contempt."

I had asked Danny to speak at the press conference for homeless LGBT youths in front of the Stonewall Inn, to describe the role of street kids in the uprising, and to describe his personal experience of being a homeless LGBT youth. He was happy to do so, and his speech was powerful. He spoke of the scars that he carried from his time on the streets, and how he had spent years struggling with shame from having stolen food and sold his body to survive. He connected the realities of suffering on the streets in 1969 to now. Afterwards he wrote to me, "It was the first time I ever talked about being a homeless kid in public. I was more than humbled that you asked me. God knows I was shaking like a leaf when I was finished."

I cannot think of Stonewall without reflecting in awe and wonder at the street kids who put their bodies on the line that night. I think of Danny, of his good friend and co-rioter Martin Boyce, of Miss New Orleans, the homeless trans girl who uprooted a parking meter and used it as a battering ram to destroy the door of the Stonewall Inn, behind which the police had retreated in fear. I think of Marsha Jonson and Sylvia Rivera.

The homeless LGBT youths of the Village had lost almost everything; many had been driven from their homes and left destitute in the streets. Because they were far and away the most visible LGBT people to be found at that time, they were targets for abuse; beating up on them was a city sport.

But they had not lost their defiance, or their pride. They had not lost their sense of solidarity with their LGBT sisters and brothers, even if they were looked on as trash. And the night of the uprising they were the storm troopers of our rebellion, fighting the police with all their hearts. With their courage they showed that they were not our trash; the truth is they were our treasure.

Danny was featured in the PBS documentary Stonewall Uprising, speaking about the consequences of that momentous night:

We became a people. We didn't necessarily know where we were going yet, you know, what organizations we were going to be or how things would go, but we became something I, as a person, could all of a sudden grab onto, that I couldn't grab onto when I'd go to a subway T-room as a kid, or a 42nd Street movie theater, you know, or being picked up by some dirty old man. You know, all of a sudden, I had brothers and sisters, you know, which I didn't have before. There was no going back now.... We had discovered a power that we weren't even aware that we had.

The Stonewall uprising was the birth of our LGBT movement. That night the street kids and hustlers and scare queens helped create the space for the rest of us to be out, to be proud. We owe them our lives.

The LGBT movement has created vast opportunities for us to have better lives than could have been dreamed of in 1969. But as life has gotten so much better for most of us, it is still horrific for our homeless LGBT youths. As we grow in freedom and power, youths are ever more emboldened to come out. And too many of them are still rejected by their families and driven to the streets. We have fought to protect the rights of LGBT people and have won remarkable victories. But for our homeless LGBT youths not much has changed since 1969. There are at least 200,000 homeless LGBT youths on the streets of the U.S.A. And despite our power and accomplishments as a movement, we have only created about 350 housing units dedicated to these 200,000 homeless LGBT youths. And so in 2014 our kids continue to suffer in the cold, and be hurt and exploited in the streets, as Danny was in 1969.

It meant the world to me when Danny and Martin Boyce agreed to be advocates for homeless LGBT youths, when they raised their voices with ours in demanding that our city, state and federal governments stop leaving youths homeless in the streets without shelter, and asserting that every young person in this nation deserves a bed to sleep in. Who could be better to assert that protecting our homeless youths must become a priority of our movement than the warriors whose courage made that movement possible?

Danny was never able to forget what it meant to be a homeless teen. He overcame homelessness and built a good life for himself, but he bore the scars in his psyche, and in his body. He contracted hepatitis while he was homeless; it shortened his life.

Last year I asked Danny and Martin to be my honored guests at our annual fundraising dinner. Danny's health wasn't so great, but I was thrilled that he was able to join us. Afterwards he emailed me:

When you were reading your speech on Friday all these hurts came back to me and I started to cry, It will alway be a part of me...Once again I cannot thank you for all the help you give to these kids. I know how deep their cuts and pain are.

The last time I saw Danny was this past June in the White House, of all places. He and Martin were invited to the Pride celebration there and had the remarkable experience of meeting President Barack Obama and First Lady Michelle Obama, in recognition of their heroism and contributions to our movement. Afterwards we gathered under the official portrait of Jackie Kennedy, to be photographed at the insistence of our friend Junior Labeija. I'm glad that I was able to be with Danny on that momentous day, to see the culmination of his journey from being a despised street kid to being rightly recognized as a heroic pioneer of our liberation. I'm grateful that my last sight of him alive on this Earth was to see him there, beaming with happiness and pride.

PHOTO GALLERY
In Memory Of Danny Garvin
Download
Calling all HuffPost superfans!
Sign up for membership to become a founding member and help shape HuffPost's next chapter
Join HuffPost

In Memory of Danny Garvin, One of the Heroic Homeless LGBT Youths Who Fought in the Stonewall Uprising (PHOTOS)
In Memory Of Danny Garvin 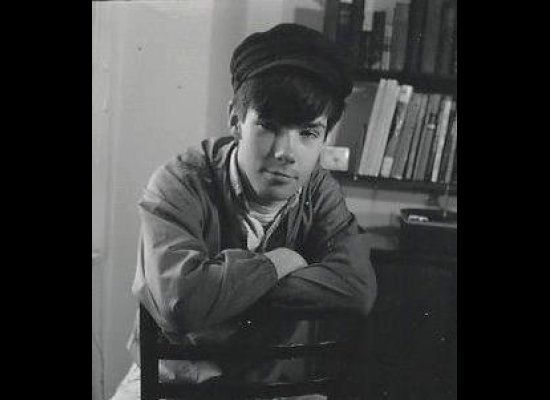