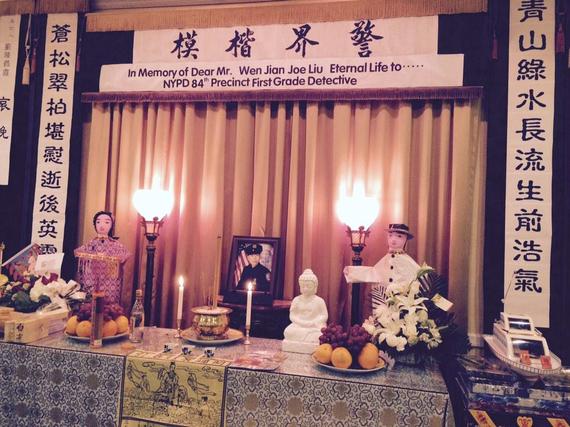 I am not a police officer. Nor am I Buddhist. But Officer Wenjian Liu was both. As we collectively grieve for his lost life and remain horrified by the murder that extinguished it, I draw some lessons and hope from his religion on ways to strengthen relationships between police and communities of color.

Buddhism, one of the world's great religions, teaches respect for life and affirms the dignity of each human being. This core teaching can help daily police-community encounters, even when police must do the difficult job of apprehending criminals. When he was killed, Officer Liu was doing his job to uphold life.

But too often, many of us, including police officers, lose connection with the basic humanity of people around us. Our social prejudices undeniably influence our daily interactions, many times without our intention or even our awareness. Race and class biases are built into our institutional arrangements and determine differential access to wealth, education, professional mobility, housing and the organization of neighborhoods. They shape criminal justice encounters and outcomes. People living in poor communities are inevitably weighted down by these inequitable arrangements. They are likely to internalize a social consciousness of being perceived as less than and to mistrust institutions that reinforce their humiliation. Thus, Buddhism invites us here to consider how institutional arrangements and policies can be strengthened to reinforce human dignity and demonstrate a respect for all life. It asks us to consider the role that each of us can play in ending systemic racism.

Buddhism also teaches compassion for suffering, our own as well as that of others. But police encounters in poor neighborhoods are usually experienced as degrading. Because poverty is connected to certain types of crime, our society mistakenly ascribes criminality in general to the poor over the rich. Since most poor people in urban contexts are non-white, mostly black and Latino, they bear the burden of these attributions. It would not be surprising if police officers enter poor neighborhoods with a goal to control and reduce the criminality they assume to be present within people who live there. Their goal is not to be compassionate. Thus, the humanity of people recedes into the background as vigilance takes the foreground. It is also often assumed that criminality and violence can only be reduced through use of force, so officers mete out more roughness. Thus, even if officers are not racist individuals, they inevitably become the arm through which cycles of systemic humiliation are reinforced.

But poverty, racism, and inequality, and their resultant suffering demand greater compassion, not less. And each police officer stands at a crucial intersection between communities and government and has a choice to make. Applying Buddhist teachings to policing means that police must see the citizens they serve as people. Criminality does not justify inhumane treatment, and while many police officers agree, it may be hard to practice in the height of confrontation. But when a police officer demonstrates less compassion in her or his work, and operates from a mindset of force and control, it ultimately diminishes her or his own humanity. Since systemic inequalities take collective effort to shift, each officer can ask, "How can I personally do my job to ease the suffering?" There may not be an easy or perfect answer, but it's so crucial that the question be asked, on a daily basis, by each officer. And by all of us.

Another important teaching of Buddhism is that compassion with self and others is cultivated over time through meditation, chanting and focused breathing. One lesson in this deliberate, careful, and dedicated practice is that how police practice their profession on a daily basis aggregates over time. When officers take the time to build trustful relationships in non-confrontational situations, to listen to the humiliation inflicted by systemic racism and inequality, they will work towards cooperative solutions that ultimately reduce not only the need for force, but also the need for crime and the need for arrests. The daily practice of compassionate policing can ultimately foster alternatives to disproportionate force against unarmed suspects and appropriate force where warranted. Ultimately, crime is not just a police problem; all of us must grapple with its causes, including the systemic factors, and work together with police to find solutions.

The demand for compassion need not be contrary to policing, even if police officers are armed, because police officers are in actuality charged with keeping peace. Peace is best kept through peace, not violence. Buddhism says it's possible to address criminality while being compassionate with criminals.

Nor does compassion need to be contrary to the demand for reform. The deaths of Officer Ramos and Officer Liu demand an equal regard for the life, dignity and nobility of police officers. It is possible, and necessary, to seek change in systemic racism while holding compassion for officers. Systemic change requires all of us to cooperate, and police officers are crucial allies. Making Buddhism's teachings on compassion, dignity, and respect for life central in police community interactions would be a fitting homage to Officer Liu and his service to our City.