While drug-related deaths continue to escalate as the Mexican drug war wages on, Mexican youth have resorted to peaceful and artistic forms of protest against the violence.

Last Sunday, activists met on Mexico City's Zocalo Square in an effort to demonstrate against the war. They covered the public space with chalk outlines of human bodies.

The bodies were supposed to represent all the lives that have been lost during the war against drugs in Mexico.

By unofficial count, at least 50,000 people have died since 2006 when Felipe Calderon deployed the military against the drug cartels in his first days as president. But the number of deaths today is undoubtedly much higher.

While Mexico City has not been as severely impacted by the drug-war as the northern region of the country, the peaceful demonstration still resonate with many in the capital city.

"We were supposed to draw sixty thousand bodies," said Mexico City resident Gisela Saveedra, who heard about the event on Twitter. "But [sixty thousand] wouldn't fit in the Zocalo, we would need three Zocalos for that," she estimated.

While some of the sketches represented anonymous deaths, others had specific names of people who have been murdered. One sketch read "this war is dictated by Washington."

But this is not the first time Mexicans turn to art to protest against war on drugs.In 2010 Christian youth groups in Ciudad Juarez began dressing as angels and bringing messages of love directly to the drug traffickers and killers. Their aim is to save their city and fellow citizens through a message of peace and love in the face of violence and hate.

Whether this decrease in murder cases is related to Mexico's peaceful protests is up for debate.

But through their art these young people have surely brought hope to a some in a city which has been deemed "the epicenter of pain." 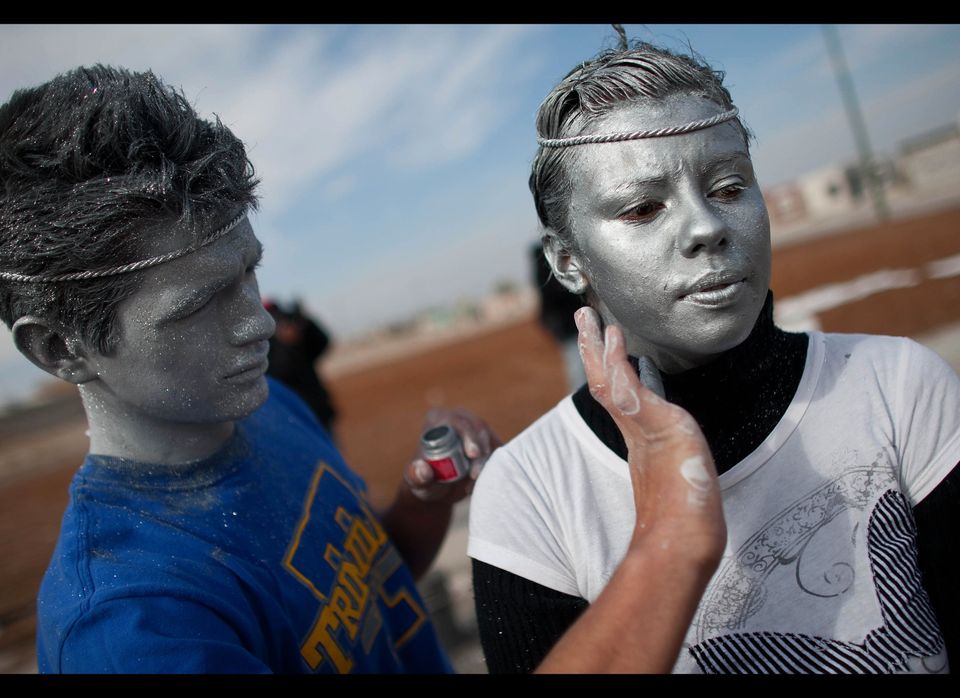 1 / 4
Mexican youth put make up on their faces
Mexican youngs put make up on their faces as they prepare to perform dressed as 'Angels' with religious messages along differents streets and at crime scenes as part of a campaign against violence in Ciudad Juarez, Chihuahua state, Mexico, on December 10, 2011. Since 2008, nearly 10,000 people have been murdered in Ciudad Juarez as drug cartels battle for the precious trafficking territory that borders the United States. AFP PHOTO/ Jesus ALCAZAR (Photo credit should read Jesus Alcazar/AFP/Getty Images)
Getty