Gas prices always go down in the fall, but usually not this much.

At 56 percent of the nation’s gas stations, the price of gas is now under $3 per gallon, according to Michael Green, a spokesman for AAA, an auto club federation. AAA collects information on gas prices from consumers who use between 80,000 - 100,000 different U.S. gas stations every day, Green said.

This is a huge change from a year ago, Green said, when only 11 percent of stations were selling unleaded fuel for less than $3. Gas hasn't been this cheap in nearly four years, AAA said in a statement on Monday.

Yet today's prices are way down even when compared with previous seasonal lows, as this graphic shows: 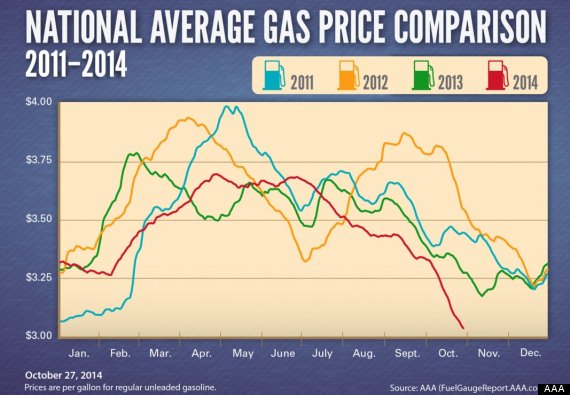 The low cost of gas could be a boon for the U.S. economy: spending less to fill up their tanks means Americans have more disposable income going into the holiday season. U.S. households save $120 for every 10 cent drop in the price of gas, the New York Times reported earlier this month, citing GasBuddy's Tom Kloza.

There are a few reasons why gas is cheaper this fall than in previous years. For one thing, crude-oil prices have tumbled recently as investors fear that a global economic slowdown could weaken demand.

In many places in America, gas is even cheaper than $3 a gallon: 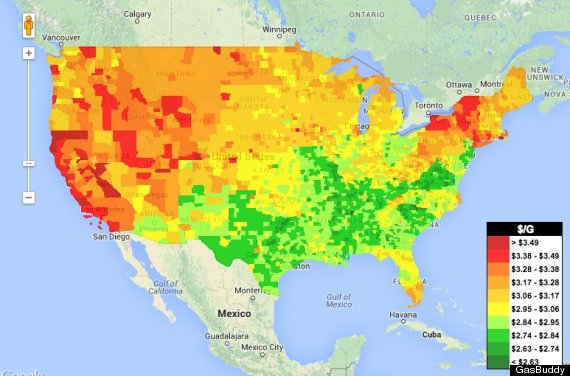 Analysts have speculated that Saudi Arabia, which produces more oil than any other OPEC member, wants to increase its share of the market.

“If there’s a landlord who sells all his houses for greatly under value, it causes the whole market to tank,” DeHaan said. “That’s what’s happening with oil. The Saudis are basically flooding the market with cheaper oil, and that’s putting a huge amount of downward pressure on oil prices.”

One more reason gas is so cheap, according to DeHaan: The U.S. is sucking more and more oil out of the ground than at any time since the 1980s. “So we have all these sources of new crude oil in the U.S., and that’s adding to the global oil supply, which naturally pushes prices down,” he said.