I returned to Myanmar last week for the first time in almost three decades. I lingered for a moment outside the peeling white walls of the former U.S. Embassy to see what had become of the street corner where I witnessed a slaughter of young idealists on the auspicious 8th day of August 1988. I recalled standing in a crowd of red and white clad protesters that rainy morning as many of them prepared for what looked like an inevitable military crackdown from the despised forces of the "Tatmadaw." I'm still amazed that so many democracy advocates thought on that fateful day that they would be able to fight AK-47s with slingshots firing bicycle spokes dipped in cow dung.

All that was left by the end of the day were massive pools of blood and torn flip-flops -- the detritus of dead and panicked activists. 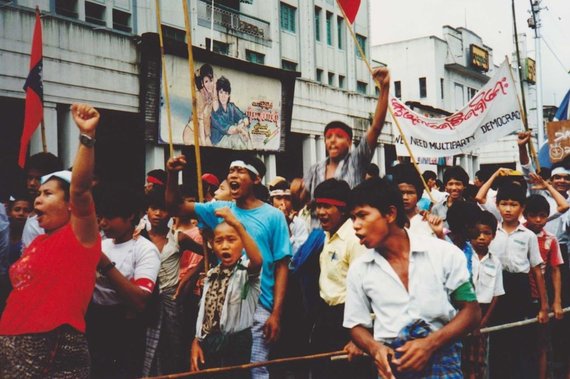 For a quarter century thereafter, Myanmar - known to the world as Burma in 1988 - remained one of the saddest, most oppressed nations on earth. For most of those years, the junta banned me from returning, punishment for reporting on the democracy movement from Yangon and the borderland jungles.

Yet, this week as Myanmar's heroine of democracy, Daw Aung San Suu Kyi, tours the United States and takes her rightful seat at the UN's General Assembly, realities here in Yangon are upside down and inside out. A vibrant free press ridicules the nation's former military leaders and urges men with machineguns to make real peace with myriad and unique ethnic groupings across the nation.

Peace initiatives are underway: Daw Suu, also known simply as "The Lady," and who now holds the nation's senior leadership post as "State Counselor," brought in this month an old eminence grise of a diplomat, Kofi Annan, to try to repair relations between ethnic Burmans and Muslim minority groups in western Myanmar.

Southeast Asia's newest Tiger-in-the-making has begun to roar with free speech and fresh yearnings for democracy. With Vietnam and Laos still tied in knots by authoritarian Marxist doctrine, and with Thailand locked in a military-led death vigil over fears of an aging King's imminent demise, Myanmar represents the freshest new light of openness in the region.

At the old and much-loved "American Center," run by the U.S. Embassy, I was greeted by gleeful civil rights advocates keen to converse with a foreign interloper. I recalled the wild rumors that swirled in 1988, which had included a widespread belief that President Reagan would send in the Seventh Fleet to defeat the Tatmadaw. In the end, this small nation's democracy activists stood up themselves to brutal authority. Today, young students wanted to know what I thought of their government's continued push to uphold anti "hate speech" laws and if these rules would damage their newfound right to free speech.

Others asked what Americans would advise to stop what they claimed was a constant incursion of Muslims from Bangladesh. Their concerns sounded strikingly familiar. In a parallel to the American conundrum, most of these so-called illegal aliens have been in Myanmar for decades and - in most cases - for centuries. I explained that in America we had our own problems with bigotry and hatred and a man who wanted to "build a wall," and have our neighbor pay for it.

Myanmar's recent democratic gains are far from secure. While most political prisoners have been released, there are rising insecurities and the long arm of neighboring China is fast at work. As Myanmar expert and author, Bertil Lintner, stated in the South China Morning Post, "Myanmar remains of huge economic and strategic importance to China" for the purposes of electric power as well as oil and gas supplies. In the restaurants and posh hotels of Yangon, Chinese businessmen seek to secure illegal logging and gemstone deals with the Tatmadaw by day, while partying into the wee hours with Myanmar's ladies of the night.

As Lintner also notes, while China has unleashed a "charm offensive" to convince Myanmar that it is a best friend forever, "where there is a carrot, there is also a stick." China, according a regional arms expert with Jane's Defense, is funneling sophisticated anti-aircraft weaponry to the United Wa State Army, a jungle insurgency led by former Communists, which continues to destabilize Myanmar.

Scrape the surface and it looks like China, with its brutal model of authoritarian rule and amoral business acumen, holds the keys to this nation's future.

In truth, though, like a lot in Asia, appearances can be deceiving. This is a nation with a deep love of freedom and with a wellspring of unfulfilled aspirations for a broader and more complete democracy. Doubters only need read the memoire's of the '88 activists who suffered for years in disease-ridden prisons, the military junta's "gulag archipelago." Almost counter-intuitively, in a world where American power is on the decline, they look to Washington for their sustenance and as a model for democracy.

President Obama has made Myanmar a central focus of the U.S. State Department's "pivot to Asia," and that attention has been paying off. Young civil society workers are studying non-violence and Republican principles through new programs paid for by an expanding U.S. Embassy presence. Idealistic American diplomats contend that this country is one of the most rewarding foreign postings in the world.

It is American "soft power" -- not its economic might, which remains a pittance alongside that of China -- that young Burmans, Shans, Kachins, even Muslim Rohingyas actively seek out and openly embrace.

While in the U.S. this week, Suu Kyi is being applauded as a Nobel Peace Laureate and champion of the oppressed, her authority, mostly moral and political, but non-military, remains fragile at best. Without dedicated U.S. support for years to come, Myanmar stands to crumble as a patchwork of diversity and revert once more to authoritarian rule. A greedy military waits in the wings to snatch power back from "The Lady" if she dares to rail against its massive human rights violations or if she upsets the cart of deals the generals are making with Chinese and Japanese interests. Despite her brash international persona, her wings and her words remain clipped in her homeland.

This is a nation that still craves U.S. friendship, but American backing of democracy in Myanmar isn't about the money spent - it is more about how we martial our human resources in a long, hard struggle. As Martin Luther King said, "The arc of the moral universe is long, but it bends towards justice," but as President Obama added, it does not bend without help from the people.