I'm pleased to announce that I'll be giving a talk in New York City on Thursday, Sept. 17, about my new book, "Drawing from Practice, Architects and the Meaning of Freehand," published in May by Routledge Press. 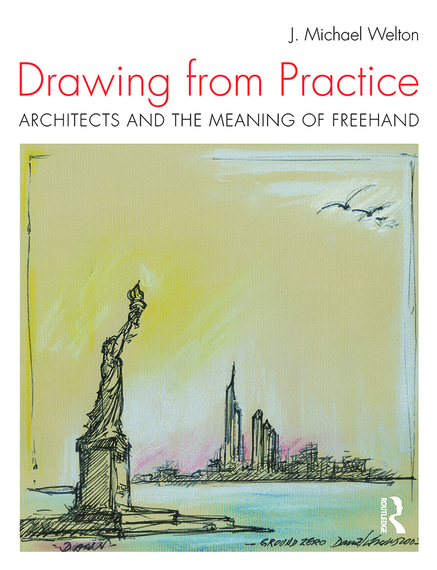 Wendy Goodman of New York calls it "a fantastic book that sheds light on the creative process of how architects envision and start to bring life to their buildings." Lynn Medford of The Wasington Post say it's "a powerful reminder of all the humanity that goes into the art" and that "through the architects' drawings and words, we experience a rare intimacy."

This book talk and signing event is free and open to the public. J. Michael Welton will give a brief talk on the New York architects featured in "Drawing from Practice," tracing their initial parti through a series of drawings to final photographs of their finished buildings. Among them are Deborah Berke, Daniel Libeskind, Richard Meier, Bill Pedersen, Suchi Reddy, Tod Williams and Billie Tsien.

The General Society of Mechanics and Tradesmen of the City of New York
20 West 44th Street
New York, NY 10036

J. Michael Welton's work on architecture, art and design has appeared in The New York Times, The Washington Post, Interior Design, Architectural Record, Metropolis, Dwell, and The Huffington Post. He also edits a digital design magazine at www.architectsandartisans.com, and was recently named architecture critic for The News & Observer in Raleigh, N.C.

The General Society of Mechanics & Tradesmen of the City of New York was founded in 1785 by the skilled craftsmen of the City. Today, this 230-year old organization continues to serve and improve the quality of life of the people of the City of New York through its educational, philanthropic and cultural programs including its tuition-free Mechanics Institute, The General Society Library, and its century-old Lecture Series.

J. Michael Welton writes for national and international publications, and edits a digital design magazine at www.architectsandartisans.com, where portions of this post first appeared.