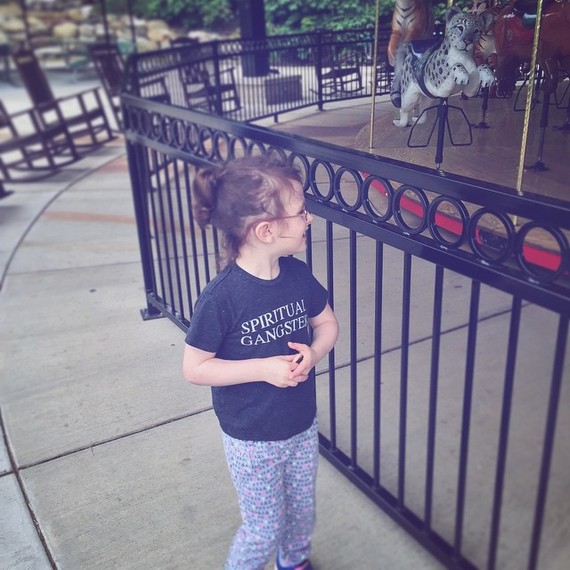 It's too easy to forget that good people still exist in this world, especially with all of the scary things we see, read and hear in real life and through news.

But they do. They're everywhere. They're as ubiquitous as everything that scares us.

I was reminded of this two days ago when I took my daughters to the zoo. My oldest wanted to go on the carousel. I didn't think my struggling to keep both kids safe and happy was obvious, but I was--struggling.

It was the baby's first time, and we chose to initially just try sitting on the peacock-shaped bench. My oldest thought the peacock was cool, but she was skeptical, especially as she saw the other kids swarm to their own wildly-colored animal seats, and not onto benches with their mom and baby sister.

The baby wouldn't sit, and generally wasn't having it at all, until the ride started, and her fine tousle of duckling hair blew gently in the carousel's breeze.

After, the baby adamantly did not want to go back on, but my oldest--used to going on twice when we hit up this favorite treat at the zoo--wanted to go again. So I did a parent-override on the one child, and we bought two more wooden tokens at the little adjoining window.

It was during this second time--trying to figure out how to jostle the baby onto something to keep her still long enough for these few minutes we'd be on the ride, while jointly appeasing my oldest, and trying to decide whether to help my oldest onto an animal, or park us all once again on that peacock bench--that I was wrestling physically with the kids and also with what to do (before I started to sweat and my girls guessed that this was anything less than awesome, Mommy-and-me fun)--when this saint of a woman with pinkish-red spiked hair and a zoo uniform swooped in.

She's a woman that we see basically every time we visit, which is often, even if she isn't always there at the carousel. She asked me if my oldest would let her stand by her on her animal of choice. My social-butterfly, people-loving oldest child was ecstatic for our new friend--and, to me, this woman's platinum blond highlights could not have made for a shinier halo.

I thanked her several times, as I stood in between my two girls, both on their own wildly-colored animals, for the very first time. I stood holding onto the baby, and our new friend was on the other side of my oldest. My oldest daughter had a smile that lit up my heart--one that I needed to see on her little-girl face after a difficult week.

The baby still didn't like it. I had to snuggle right up next to her and repeatedly remind her that Mommy was right here, and I sang "up and down, up and down" to her to help her focus on my tightly-wrapped arms, and the simplicity of this brand-new sensation (of being on a carousel).

The woman whispered to me over my oldest's head, "She's beautiful," and she had a smile of natural delight on her own face--one that nearly matched my daughter's.

We got off, and I realized I couldn't have done that--we could not possibly have had this same memory-created experience--without her help. I told her that it was the baby's first time ever, and I thanked her from my heart. I told her that we had come that day pretty much to ride the carousel and then go home and that, because of her and her kindness, it had been magical.

I felt so filled with love--love for my girls, tenderness at seeing my bold, naturally aggressive baby frightened at something, and for my "big" girl's little-girl excitement--and with love for this virtual stranger.

We went back to our stroller, stuffed with my diaper bag, and, apparently not enough snacks--which is why we were there for just this one special thing--because my oldest was hungry and wanted to go home to eat something familiar.

So we're collecting our stuff, and beginning to walk away, and another little girl asked her mother, who then turned to me and asked, "Is it okay if we share our Goldfish crackers with your girls?"

I was inside of my own private mother-with-young-kids world--attempting to push my car-sized stroller, and watch my two daughters, as I also attempted to have them walk next to me (cue semi-insane laughter)--and I hadn't been paying attention. I look up after this little girl's mother has to repeat her question. Her daughter is holding a gigantic bag of Goldfish crackers, and with my gratitude and permission, her tiny fist held out two handfuls of yellow fish--one for my joyful oldest and one for the still-reluctantly happy baby.

We thanked them, and this got the baby to climb back into her stroller seat, and my oldest then sat down on the little bench on the back for bigger kids, and I pushed them as they munched on their crackers, and we headed out of the zoo.

These two--what felt like miraculous--acts of simple kindness made me feel like I was floating as we walked back through the parking lot to my silver Jetta.

I was reminded that there is kindness out there waiting for us, and we have only to gift it to one another.