As more states navigate through politics and begin implementation of the Common Core, it's important to understand what it all means to what students are learning.

Common Core is the process by which students must learn information. And while it is important for education officials to maximize on the "how students learn," the content standards, or the "what students learn" still matter. For states in which content standards continue to serve as the guidepost for learning, this could be problematic in appreciating diversity.

While some education advocates argue for more flexibility in terms of how content standards can be interpreted, the fact remains that there are still a number of states in which standards of learning are adopted at the state level. In Texas, these processes can be highly politicized and controversial, particularly when the standards become guides for textbook adoption.

But what makes standards so much more important than Common Core is that they are taken as the guide for what students should know.

Take, for example, California's history-social science content standards, which have not been updated since 1998 and which serve as the basis for the state's curriculum frameworks and textbook adoption process. California has one of the most proscriptive content learning standards in the country, thereby compelling teachers and textbook publishers to follow its guidelines for instruction and content creation.

When it comes to Hinduism and ancient India, the most controversial of those standards includes compelling teachers to "[d]iscuss the significance of the Aryan invasions;" and "[o]utline the social structure of the caste system." Moreover, the standards go on to identify Sri Lanka as Ceylon, a name that has not been used since 1972.

If you're a pupil in the California public schools, your only knowledge of Hinduism in a world history course would be that there was a mythical group called the Aryans and that Hinduism is predicated upon the caste system. The Aryan Invasion Theory, as it is known, has been disputed -- and in many respects debunked -- in recent years, while caste was never sanctioned -- nor even mentioned -- in the Vedas. Yet for Hindu American students in California and their parents, the only significant understanding of Hinduism is as a backwards social system rather than as a set of philosophies evolved over 5,000 years. Some textbooks have also gone on to offend Hindus and Muslims by misidentifying simple things such as types of prayer, as seen in the example below. 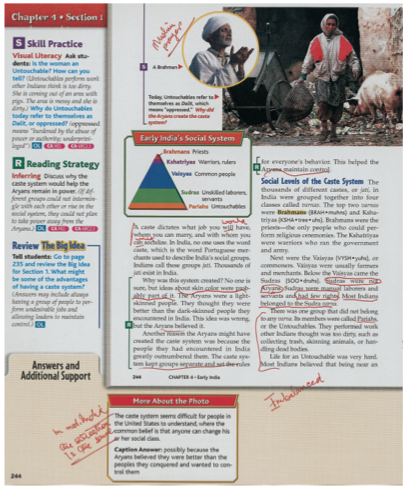 In the 21st century, no child, regardless of race, religion, sexuality or special need should feel embarrassed about his/her identity and should never become victim to bullying. Yet California's current standards do create a climate of both shame for Hindu American students and bullying because of the negative depictions of the faith in classroom instruction and textbooks.

We've heard from parents across the state about how the standards -- and the accompanying textbook depictions --have devastated their 11 and 12-year-old children, who have been picked on or who have decided to hide their religious identities, or from frustrated teachers on how archaic 20th century standards and curriculum frameworks are hindering their ability to teach up-to-date information. Moreover, the way Hinduism is taught in schools is disconnected from how Hindus actually practice, making for sometimes awkward interactions between teachers and their Hindu students. One of my colleagues, for example, was asked about her caste in 9th grade in front of the rest of her classmates, a question to which she did not know the answer because for her devout Hindu family, it was irrelevant.

While the California Department of Education under state superintendent Tom Torlakson, has attempted to make public schools more teacher and student-friendly, the outdated standards continue to be a heavy blemish on an otherwise world-class public education system. Some California legislators are looking to push the issue in the legislature, arguing that the standards must be accurate and embrace the state's kaleidoscope without marginalizing any of the state's communities.

Still, if the country's largest, most diverse, and arguably most progressive state has these issues, think of how many other states are perpetuating these sorts of misrepresentations. This is why discussions about Common Core should be in tandem with ones about how to make standards more accurate and better reflective of the growing diversity in America's classrooms, and most importantly, able to prepare American students in every facet of global market which will be their workplace. Moreover, fine-tuning or revising standards with representative community feedback embodies the ideal of a truly public education.

Common Core is an approach with ambitious goals for students and opportunities for educators to employ more praxis-based strategies in the classroom. Whether the approach succeeds or fails ultimately will depend on what students learn, not just how. Having accurate and representative standards of learning at the state or local level will go a long way in determining America's public education future.