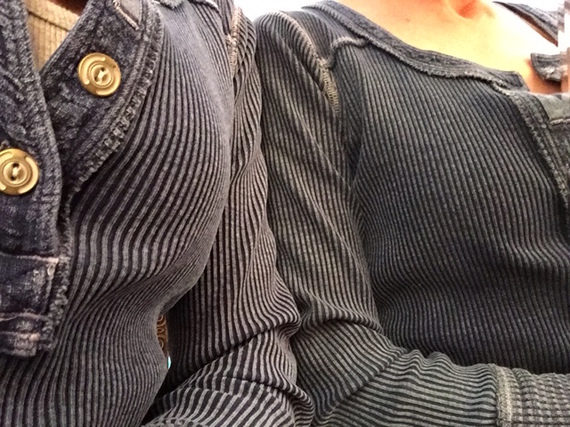 Yolanda Foster, Beverly Hills-based "Real" "housewife," whose matinee-length wedded status though recently upended, is best known (as in both for-the-good-of-it and widespread) for being her elegant and courageous own, single self, candidly sharing her ongoing battle with illnesses and ailments in a body that to even the casual viewer's eyes has clearly worked overtime. Amongst bodily culprits counted front and center were her silicone implants, removed and recorded for pop culture posterity on a recent season 6 episode of Bravo TVs Real Housewives of Beverly Hills.

Ms Foster has managed to evoke intelligence and class in the face of her condition, which has not surprisingly become fodder for speculation = gossip = reality ratings boosters. Interesting is how the rest of the Beverly Hills gals don't bat an eye whilst tsk-tsking and speculating on their compatriot's condition, as to their own enhanced selves, to which end much is either silent or subject to token denial. But I commend any RH dialogue that scratches the countless surfaces all women must deal with in the everyday, non-televised world. And I remain on record as charter member/casual fan of Bravo's RH franchise, having blogged on it at HP as well, and continue to enjoy it from both pop sociological and fashion-fiend/schlock-loving standpoints.

The glam ex-pat's not so glam ex-plant surgery sheds a prime-time allocated, casual yet bright light on the glossed over and largely ignored ramifications of breast implant acquisition in a nation known globally for its coveting of mammified melons/jugs/racks/u-call-its. Cleavage is king in the US, a country that still obsesses on breasts as part of its puritanical smirkish recovery plan, underscored and supported (yes, pun) by a cosmetic surgery mega system that thrives the good ole American way as it regards - and spends on - looks and health: Create the need then feed it. I thank Ms Foster for giving me a topical roundtuit - I have long wanted to write about this.

Yolanda's story points to a few very simple issues I wish to reiterate based on my own experience. Rather than calling the process by a name as heard in RHOBH, I just say I got the darn things taken out.

Let's establish real quick that in this piece I am not addressing reconstructive surgery. I am addressing optional cosmetic surgery. The factual elements of this article are substantiated first by my experience. Ms Foster's disclosures and long-held if less shared info and stats are a couple clicks away; better yet, answered by a med pro.

As first generation American I look a little from the outside in on breast fixation. As small-breasted slim/athletically-built woman, I look at it from waaay on the inside. I have had my own journey to recognizing what reinforcement I needed and did not need, which is why I got breast implants when I was in my late 20s. By the time I was 40 I chose to have them removed.

I liked "my" new shape back then but instantly recognized their common pitfall: loss of sensation. Breasts are an erogenous zone in many a personal universe. Implant recipients need to understand they will surrender sensation for the look. In my case, the potential numbing was not discussed, therefore never psychosomatically suggested.

I soon also noticed too many eyes would go too quickly to my chest. I try to stand on my brains and personality and cannot emphasize how much more I prefer to be looked in the eye. I suppose I must admit to an immediate disconnect on that count from the get-go.

After 20 years with the same set of implants, if not removal, it was high time for a re-do. This is the second reality not made as clear as it should be (or haphazardly ignored by eager implant wearers?). Breast implants need to be re-done. Again and again, depending on the recipient's age when first done.

The need for implant re-dos can occur at any time, depending on the implant, where it is placed and the person's own body and how it reacts against the foreign object that is inserted into the body. As consumers we must seek and support screening for any cosmetic procedure founded on practicality and realism, for pop culture/media-fed temptation and the power of seductive suggestion swirl around each and every one of us, 24/7. The cosmetic surgery behemoth is already well fed - also by each and every one of us.

Implant re-do's bring with them, through pure logic alone, their own set of pitfalls: It is invasive surgery, yet another foreign object is being inserted into the body, and yet again the body will do what it can to fight it. Oh, and there's co$t; high and repeated, even if without any complications. In Yolanda Foster's case, it affected her autoimmune system and the implants leaked like travelling aliens. In my case, my body eventually hardened the cavity in which the implants existed.

My impetus for the removal? I was simply over them. I was taking yoga lessons and could feel them in certain poses. They got in the way. And my husband and I were planning on having a baby. I personally did not want to breastfeed an infant with implants in place. Ms Foster is on network TV record as saying she passed silicone on to her children when she breastfed them. For me it was 80% for the baby, 20% not wishing to endure the lacto-expansion (often not comfy) with added gel padding inside. At least my residual vanity and comfort leaned in favor of the lil one, who had no voice or choice in the matter....

The second doctor I interviewed with got the removal job because he did not insist on dual reconstructive surgery - the first one did. I wanted first to see what my own body could do to return to its natural normal. And I am so glad I did. No reconstruction was needed. Everything about my breasts returned to what I'd call a totally age-appropriate normal. Ditto on my own feminine ego. I can't fit into some of the lower cut, bosomy styles, but then, I totally get that I can fit into something else.

Give me a soft pullover and a good pair of jeans and I am happy. Give me a dress with a fitted bodice and sleeves and that's eye-catching enough for me. Sure, some cleavage would've been nice, but, oh well, no biggie. I have learned to work with what I have. As I have grown older, I have embraced being a tad, um, let's call it svelte. Our agendas in attention getting are personal and dictated only by our selves and our needs - whether superficial or deep-seated or both.

May we women continue our myriad journeys to contentment and security with minimal artificiality in our presentations of self, physical or otherwise, at least so that we can allow for our health to come in a super close second. Even better; how about first?