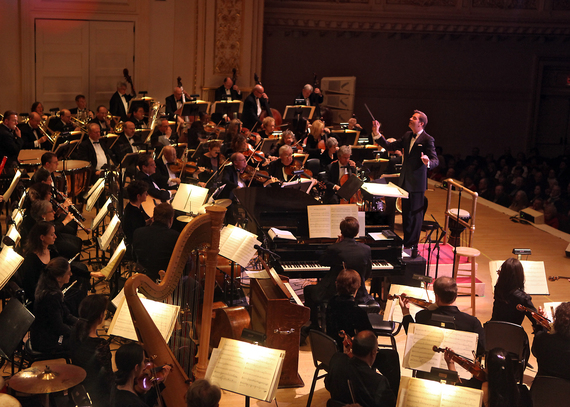 Today, orchestral, jazz, and traditional vocalists are relegated to the sidelines more than ever, and pop and rock musicians, who target a young audience, dominate pop culture. With that, it becomes increasingly difficult for these more traditional artists to find an audience and remain relevant. However, there are organizations proving ways to be nimble and keep afloat in order to celebrate of their musical heritage. The New York Pops, for instance, proves that it follows the proverb "give the people what they want," by mixing in pop culture and celebrity appeal to help keep the light on for their more traditional, orchestral repertoire.

To call a spade a spade, the concept of a Pops organization is in fact to provide concertgoers with music that is viewed as accessible and in some respects, easily digestible. Therefore, what organizations like the New York Pops are doing is not earth shattering, however, the game has certainly changed. Back in the mid-20th century, orchestras and traditional pop vocalists were not on the fringe, they were de rigueur. Artists like Andre Previn, Frank Sinatra, Ella Fitzgerald and so many more, shared the wave lengths along side Elvis and the Beatles, understanding that they appealed to different fans but in some grand sense, made their own contributions to pop culture of the day.

In that same sense, organizations like the New York Pops, Boston Pops and many others bit off the parts they could chew and translated them into orchestral form. Just as much as Arthur Fiedler conducted "Liebestraum" and "Jalousie," he mixed in Broadway and pop song selections, as well as created albums like, "Chet Atkins Picks on the Pops," and the famous "Saturday Night Fiedler" disco album, among many more. This trend continued, especially with Fielder's successor John Williams, who so successfully bridged the gap between traditional orchestra music and pop as the composer for many iconic films' iconic scores including, Star Wars, Indiana Jones, and E.T.

However, as much as these groups have evolved, the schism grows further apart requiring music directors like Steven Reineke of the New York Pops to find new ways to bridge that gap with a diverse season of offerings.

I had a chance to catch up with Reineke on the eve of the orchestra's concert this week at Carnegie Hall titled, "By Request: An Evening with the Orchestra." An annual tradition initiated several years back, these evenings provide a chance for Reineke to showcase the Pops' best orchestral numbers - balancing their season with a night dedicated exclusively to music of the Beatles ("All You Need is Love"), an evening celebrating Frank Sinatra ("Let's Be Frank") with guest artists like punk rocker Storm Large, and a holiday show starring Broadway's leading lady, Kelli O'Hara and Glee star, Matthew Morrison.

"I'm really looking forward to it," Reineke said. "Tailoring to particular interests in the wide range of audience members," he continued, "I heard from many audience members saying [that] we love the programming and we love all the guest artists you bring in, but sometimes we just want to hear the orchestra." However, he also noted that "honestly, It think it is more the long-term subscribers that really, really enjoy something like this, but to me, it also appeals to any die-hard music fans because it's a lot of pieces that don't always get performed... Sometimes it's the pieces that can fall between the cracks."

Acknowledging the space "in between" where he's so successfully found a home for the organization, Reineke added, "A lot of symphony orchestras think [the selections are] not hoity-toity enough... or meaty enough, for example, and yet some people think they don't fit on Pops." "Maybe to our younger, newer audience members, this may not be as appealing, although it should be. I want them to come and hear this great music played by a great orchestra."

Reineke too, has a unique perspective as musical director not only for the New York Pops but also as Pops conductor for the National Symphony and Toronto symphony orchestras. Drilling deeper into the search for relevance, Reineke said that he has to "play to my audiences differently in each city... part of it is people like to reference something local, so whenever I have a Washington, DC tie-in, whether that's a guest artist like Roberta Flack or the music of John Phillips Sousa or Duke Ellington, who both were born there, that's very different and then Toronto, when I do Canadian content and in particular, use Canadian talent, it's always very important there."

Reineke made this same comparison to his work in New York City, where the "pride of our New York musicians and composers" plays well including Aaron Copland, George Gershwin and Leonard Bernstein - all of whom they will perform music by at this week's performance.

Having brought up the point about how Pops organizations have evolved over the last half-century, Reineke added that he sees it as "paying great homage to the traditions of the Pops Orchestra and the traditions of the likes of Arthur Fiedler and John Williams, and my teacher, Erich Kunzl... to Skitch Henderson (New York Pops founder, and Tonight Show bandleader)," he said. "This is part of my job... to keep the legacy alive and this is where a concert like this really comes into play, yet I still think its very relevant and just as much fun for a modern, contemporary audience as it was forty years ago."

For more information about the New York Pops and tonight's concert, visit www.nypops.org.