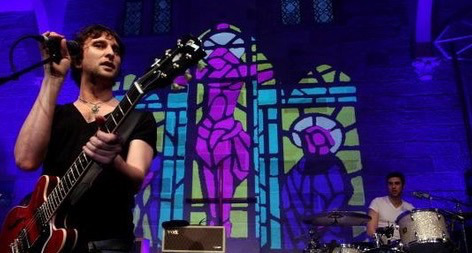 I come to praise alternative worship, not to bury it...

No, I have not turned over my blog to a guest who is about to refute everything I've said advocating traditional worship-this is really me. I fear that I've previously given the impression that I'm opposed to alternative worship, which is absolutely not the case, so I want to back up a bit and give some context about the so-called "worship wars."

You see, over the past few decades, many have come to view worship as incidental, even perhaps an intrusion upon the life of faith. More direct, person-to-person ministry through outreach, pastoral care and community building became seen as more desirable, while worship services themselves became shorn of their trappings so as to be less and less distinguishable and set apart from the rest of our daily lives. Let me be clear: this was a necessary correction in the life of the 20th century church. Mid-century Christian worship had become staid, complacent and dull, and mainstream churches themselves were often morally bankrupt, seldom standing up against the racism and violence that were rampant during those times. People went to church more to be inculcated into the rights and responsibilities of good citizenship than to experience an encounter with the transcendent, all-powerful God of scripture. Not to be too hard on these well-behaved and well-dressed nuclear families of days gone by...having viewed the unspeakable horrors of two wars, the holocaust and the bombings of Hiroshima and Nagasaki, who could blame them for doubting it mattered much how they honored this God, who must have looked less omnipotent during that time in history than perhaps any other? It's certainly understandable that many chose to retreat into safety and comfort, eschewing change, growth, and complex social and economic justice issues.

It was into that realm of safety and privilege that alternative trends in worship and ministry began to speak, and much good was accomplished, particularly in areas of reviving lay involvement in leadership and the church's duty to be a prophetic voice for the marginalized and against injustice. But as with every reactive movement, often the baby gets thrown out with the bathwater and next generations have to recover what was lost, which is exactly what has been happening with the Emergent church movement.

But a revival of interest in traditional forms does not mean that alternative forms should be tossed aside-clearly, that would be destined to form a vicious cycle. Alternative worship is a vibrant and necessary component of the worship life of any community, as long as those designing the worship have a clear understanding of what "alternative" means; it is not synonymous with "contemporary." If one's typical worship service is three praise songs, a sermon where you're asked to fill in the blanks of the pastor's bite-sized points, a prayer again given by the pastor, maybe a testimony, then a couple more songs, well, guess what, the alternative to that might actually be "traditional," perhaps something quiet and contemplative with chant or other simple music, lay-led prayers, and how about instead of a sermon, the pastor worships along with everyone else rather than making him or herself the center of attention. God being the center of attention-imagine that!

If, however, your typical worship is hymns on the organ, lectionary readings, and communion, then an alternative to that may involve jazz, theater, art, or yes, even rock music, if that's what would resonate with that congregation (although personally, I'd prefer indie folk or EDM, but that's just me...) The point is, alternative worship has to be just that: an alternative to the main worship for that community, consistent with said community's theology and mission.

Debating the finer points of traditional, alternative and contemporary worship may seem a bit like inside baseball to the average churchgoer, but I hope to inspire more active engagement from worshippers rather than passively consuming the mediocre (or downright poor) worship experience they are often given. And to worship leaders themselves, oh, my dear sisters and brothers, I beg of you: do not put yourselves on auto-pilot and keep offering the same thing you've always done, week after week and year after year, tradition notwithstanding. Traditions survive and thrive because they are tested by time, adapted where necessary, and taught, honored and explained to new generations. Taking traditions for granted-without examining or understanding them-is the quickest way to kill them. Every worship service should be "alternative": an alternative to the violence, selfishness and loneliness of the world, an alternative to the never-ending drive to fuel our self-esteem with material goods and other addictions, an alternative to seeing ourselves as small, petty and isolated and instead as part of something larger than ourselves. Every worship service is an opportunity to encounter the living God. That experience can change (and has changed) lives, and every time we show up for a service of worship, we have the right and duty to expect and demand no less.