Among the things I've missed was the creation of Millennium Park, and with it, of the Bean, a 100-ton stainless steal colossus completed years behind schedule in 2006. Who could be so hard of heart that they would go to Chicago and not want to see the Bean? Not I. So I'm back, and I went to see the Bean. 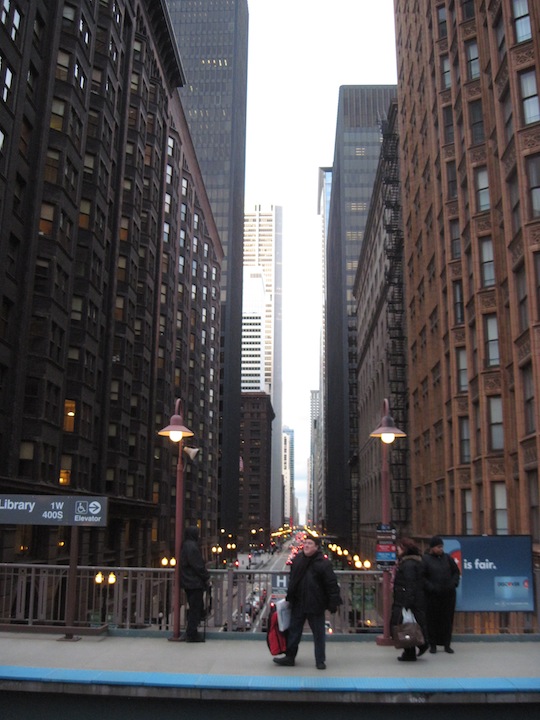 New York's 1916 Zoning Resolution imposed the pyramid on the city's architecture, creating the tapering, balletic skyscrapers of Manhattan. When you think about it, the original World Trade Center towers were really Chicago towers; the new World Trade Center, a soaring glass needle, is much more New Yorkian.

Chicago's stolid towers create a sense of might: of labor, industry, and commerce. As a body of architecture, they are a glorious portrait and instance of the productive facet of the American character; one of our best facets.

For all that this concentrated strength is a heroic phenomenon, like most heroic phenomena, it carries a necessary flaw. José Ortega y Gasset described this flaw in his 1929 essay "The Revolt of the Masses":

"When in the early stages of the Empire some cultured provincial - Lucan or Seneca - arrived in Rome, and saw the magnificent imperial buildings, symbols of an enduring power, he felt his heart contract within him. Nothing new could now happen in the world. Rome was eternal."

The very success of the principle of Chicago has a tendency to stifle the future of Chicago. We are no longer a child nation, as perhaps we were when Chicago burned in 1871; nor are we a vigorous young nation, as Edward Hopper depicted us at mid-century. Instead, we are a mature nation, prone to intimidation by our own past successes, tending toward sclerosis.

What is sclerosis, but the gradual choking of vitality by obstacles strong enough to impede and numb, but brittle enough to shatter and kill? In our maturity, it behooves us to guard against sclerosis, against that contracting of the heart which Ortega y Gasset describes.

It is to an anti-sclerotic campaign that the Bean brilliantly contributes.

The Bean has the uncanny perfection of a metaphysical object, of a digital effect circa Terminator 2. Approaching the Bean from the south, one sees only a distortion of space, an incredible inconsistency: 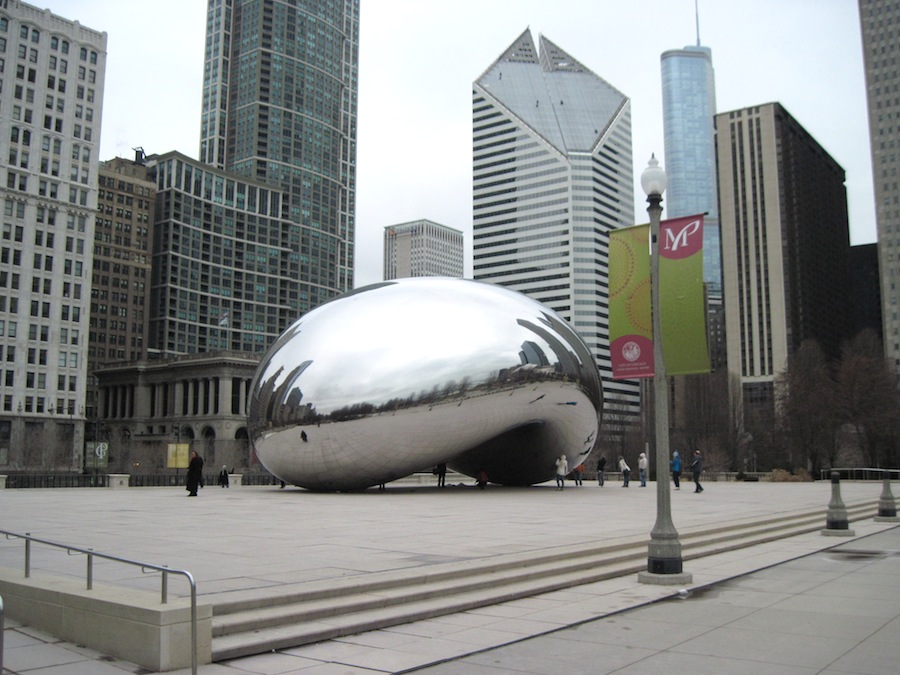 It is so perfect that it seems to have arrived from another planet. One sympathizes with Kapoor's distress at its premature unveiling in 2004, before construction was complete. Just as the Bean is perfect in space, it should be perfect in time as well: its polished surface is designed to erase its own origin.

Coming nearer, one sees that it has panoptic properties: its elliptic geometry replicates on its surface the entire visible city. But the city is not absorbed by the Bean without transformation. Here I am in Millennium Park, the city behind me: 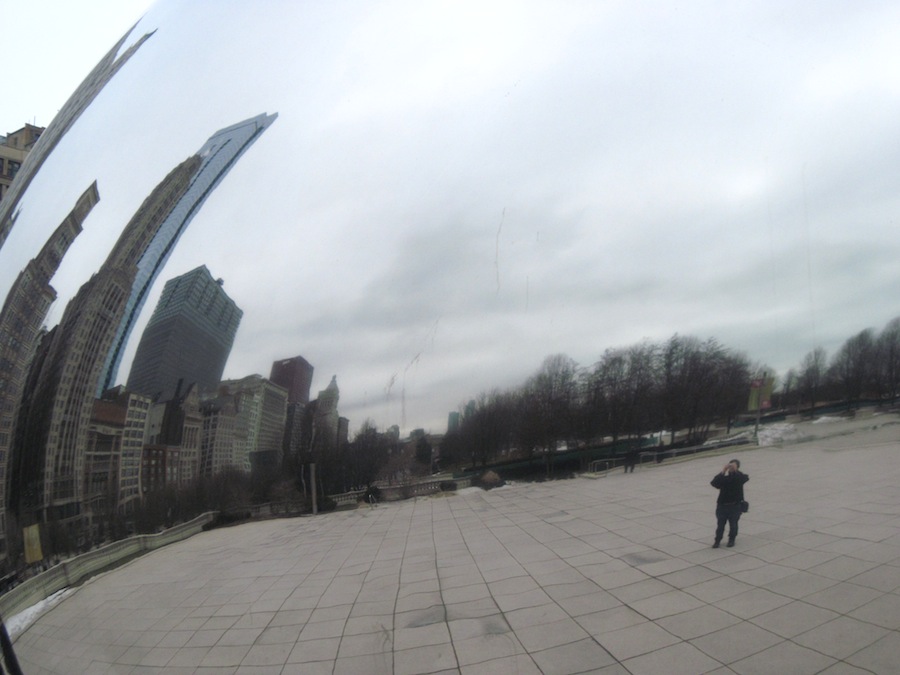 Or, rather, here is the image of me in the mind of the Bean, joined to the image of the park and the image of the city. This is very much the impression one has, staring into the surface of the Bean - that the immense reflective surface is like a mind, in the sense that the mind observes the universe, and models it. Does the Bean have a mind? Come now, we are not idol worshippers here. We approach art not for worship but for catharsis; not to see something else, but to see ourselves. We come to art to identify so intensely with it that when its heart breaks, when its brain breaks, we too are cracked open. In this way, the pulsing, overwhelming mindfulness of the Bean is, in fact, our own mind, electrically shuddering as it consumes an entire city.

So what is this essential transformation which occurs as the Bean absorbs Chicago? 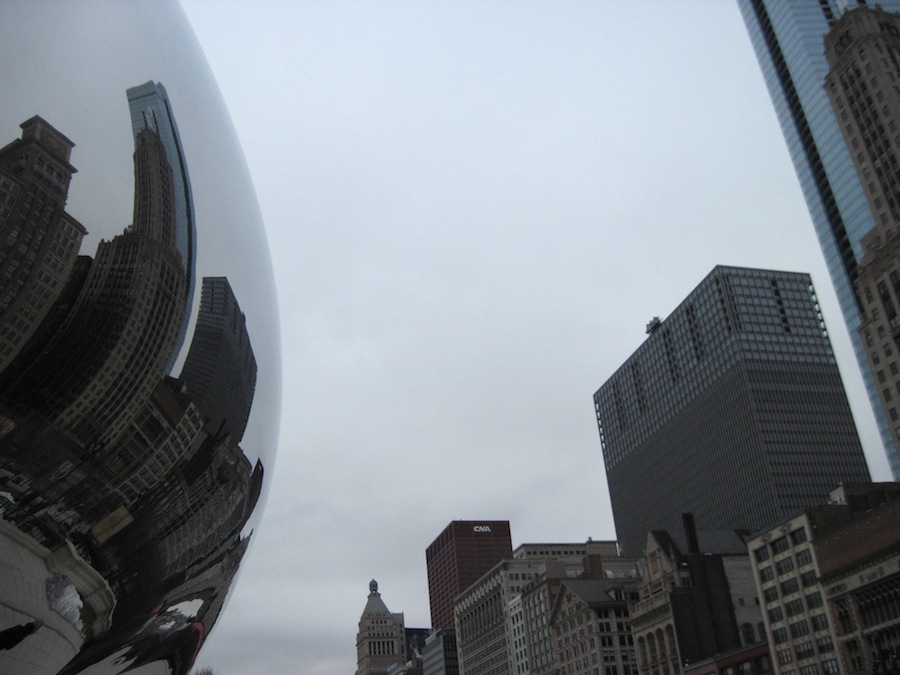 All of the straight lines curve. Witness the intrusion of another world into our own. In this world, mighty skyscrapers bend, steel and stone and glass shimmer and dance. The Bean allows us to see that Chicago-as-it-is is not eternal, that new things can happen in the world. The Bean returns to us the comprehension that things, be they never so great, can still be otherwise.

This is the tremendous, fundamental power of the Bean, its anti-sclerotic effect. The revival of youth, in men and nations alike, is not a matter of earrings punched in wrinkled ears, or thinning hair coaxed into ponytails. It is a matter of regaining that sense that things could be other than what they are. This deep sense underlies the creativity of children, the children who built our great cities. And Anish Kapoor has imported that sense back into Chicago, the most august of our cities.

The Bean does not have an elliptic upper surface alone. It also has a hyperbolic lower surface. And it is a messy story. 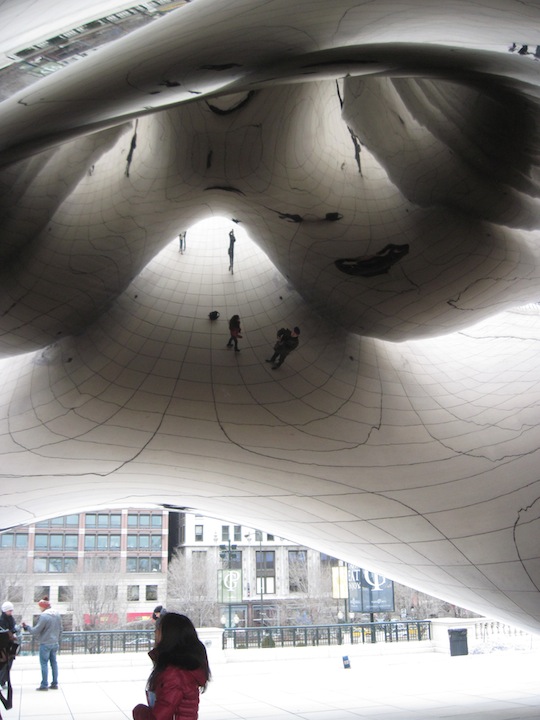 Kapoor has even ensured that the tiles beneath the Bean form a cartesian grid, so that its distortions in the hyperbolic underside of the Bean are very explicit.

From the straight-lined real Chicago, one arrives in Millennium Park, and is charmed by the curving virtual Chicago. And then one enters into - what? What is this? 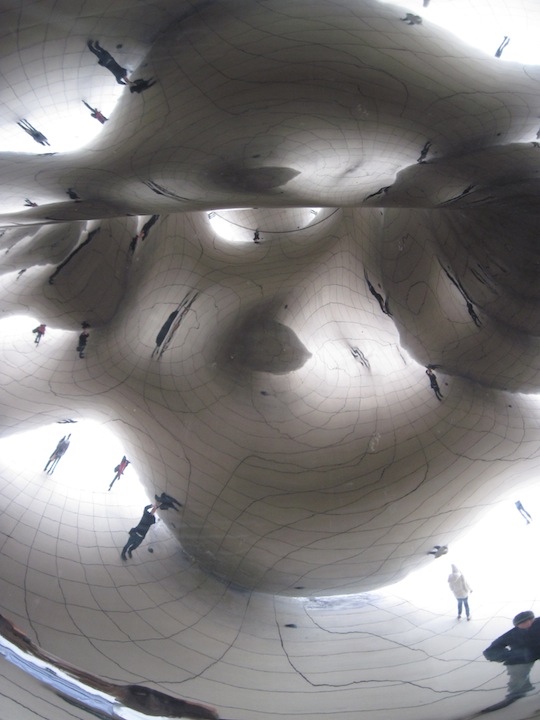 What is this madness?

This is, to me, Kapoor's full statement on childlike creativity. The elliptic Bean returns to us the world as visualized by our childlike selves: mutable, sparking with potential, fluid in form. But the hyperbolic Bean illustrates the childlike mind itself: an infolding maze, untraceable - frightening - shocking and alien.

I see the hyperbolic Bean as saying - "Yes, you may have back the abnormal inventiveness and vigor of your infancy; you may have back your imagination and your industry. But nothing is free. You cannot have these things you need, without giving up the things which comfort you. You cannot go on traveling your familiar roads, and mumbling your stock phrases, and conducting your affairs in a warm and sleepy haze. You can still make great things, but you must embrace danger to do it. The danger is the certainty that you will not remain yourself. You yourself will become the perfect thing which has arrived from another planet." 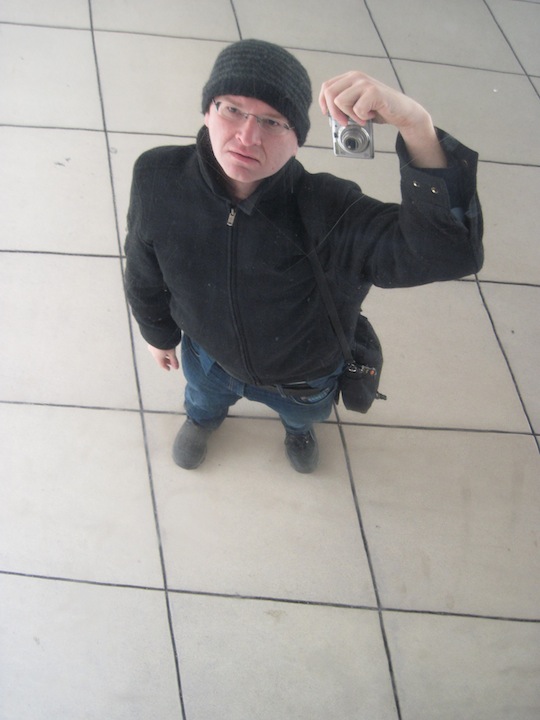 me in hyperbolic space

No doubt Kapoor was not, in fact, thinking these very things when he was designing the Bean. But consider how much easier it would have been just to give the goddamned thing a flat bottom. He balanced 100 tons of steel on two nimble feet instead of one fat ass. 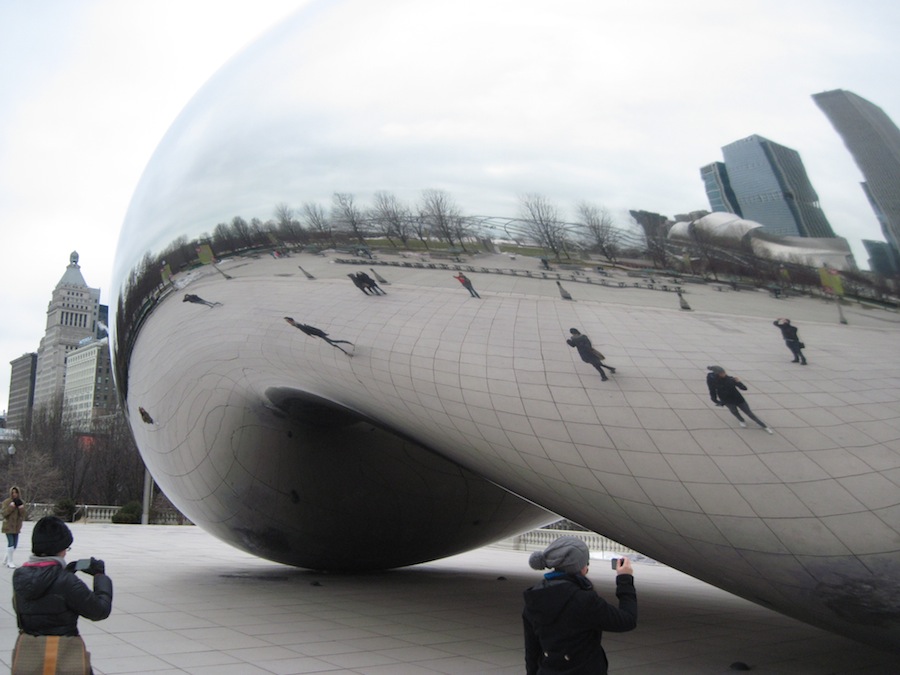 Kapoor called it "Cloud Gate," and indeed one passes under it as through a gate. The gate might not mean what I see in it, but it means something. And the object has such terrific strangeness and force that it forces thoughtfulness upon you. This is my sketch of my own thoughts in confrontation with the Bean. But if the Bean has anything to say, it is that things could be otherwise. My idea is not your idea. I encourage you, when next you are in Chicago, to experience your own unique strain of liberation in the company of the Bean.

All geometry graphics via wikipedia.org
All photos by the author