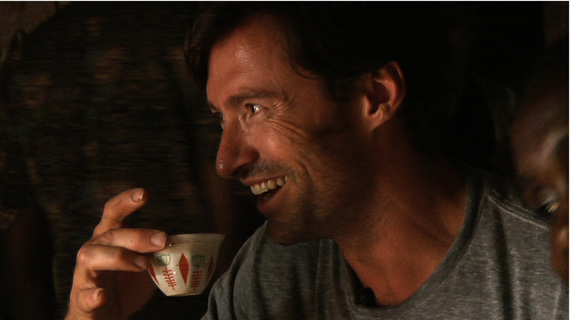 Seven years ago, Hugh Jackman set off on a journey to Ethiopia that would change his life in ways that he could never have predicted. This week, a documentary film "Dukale's Dream" is being released that chronicles this journey. Hugh Jackman and economist Courtenay Cabot Venton explain why the messages of the film extend well beyond Dukale and tell a story of empowerment and hope that is transforming poverty.

In 2008, Hugh Jackman traveled as an ambassador for World Vision to the district of Kochere, one of the primary coffee growing regions in Ethiopia. Hugh met and worked alongside Dukale, a poor coffee farmer. Dukale, his wife and five children were living in a mud hut, struggling to feed their family. But through a community mobilization program that helped with issues such as agricultural production and access to water, Dukale had started to lift his family out of poverty.

Hugh and his wife, Deborra Lee Furness, made a promise to find a way to help. Hugh returned to New York and spoke at the United Nations - at least he could offer his voice to highlight the issues faced by Dukale and other coffee farmers like him.

But it just wasn't enough. Hugh was acutely aware that ultimately the difference between his life and Dukale's life came down to the luck of where he was born. So Hugh teamed up with David Steingard and founded Laughing Man Coffee and Tea, a company that fair trade sources its coffee, ensuring a fair price for farmers.

Following in the footsteps of Paul Newman, they also give the profits from the business back to causes such as education and social entrepreneurship through the Laughing Man Foundation. The business model creates a virtuous cycle of good; each cup of coffee not only provides a revenue stream for a poor farmer but also generates profits that are channeled to other charitable ventures.

Hugh and David named their signature coffee "Dukale's Dream". This week, a documentary film by the same name is being released that chronicles this seven-year journey. Josh Rothstein, the film's Director, is quick to point out that they had no intention of creating a documentary when they filmed Hugh, Deb and Dukale on that first trip. "We were hoping to get footage to showcase some of the work that World Vision is doing around the world. When we played back the footage, we were all struck by the connection between Hugh and Dukale; we felt we had really captured a compelling story".

But, importantly, the key themes of the film stretch well beyond the boundaries of Dukale's story.

The international aid industry has a long history of providing all sorts of programs for the poor - whether we are delivering bags of food, clean water pumps, or schools, we typically provide what we think a community most needs. But these hand outs, however well intentioned, often fail. The humanitarian system is reaching a crisis point; the number of people affected by crisis has doubled in the last 10 years and the costs have trebled, far outstripping the capacity of nations to respond.

At the same time, evidence is showing us that small investments in community mobilization tend to snowball and lift families out of poverty. This idea of a hand up rather than a hand out is a critical change in the way that we do international aid. The approach moves away from a more traditional development model that is designed from a top-down, expert-led perspective. Instead, the focus shifts to personal initiative and collective action as the starting points to transform poverty from the inside out.

Such an approach is delivering some of the highest returns in poverty reduction. For example, a recent evaluation of a Self Help Group model in Ethiopia is demonstrating community benefits over $100 for every $1 spent.

The shift is subtle, but can make the difference between a project that fails and one that brings long term sustainable change. The communities themselves have to be the starting point - they know best what they need, in what order, and how best to provide it.

As businesses start to grow, and farmers see that they can make a difference for themselves and their communities, families begin to rise up. Women are empowered to invest in their own businesses. Dukale's wife Adanesh starts her own tea shop and joins a savings group to work collectively with women in her community to invest and grow their businesses.

As families like Dukale's become more secure in their income, they begin to send their children to school. Where children were needed to work the farm, fetch water, or help at home to ensure the family had enough to eat, families are now able to afford school fees, and more importantly release their children from household duties. For each additional year of school in a developing country, a child's future income is estimated to increase by between 10-15%. For every year that a girl goes to school, the risk of infant mortality is cut by 5-10% for her own children.

As families begin to rise up, so do their communities. Dukale begins to hire people in his community to work on his farm. Those farmers are then able to send their children to school, access health care, and invest in their businesses. And so the engine of change begins to turn.

Dukale's Dream is available on iTunes and all major VOD platforms throughout North American on July 14th.

Be a part of making #DukalesDream a reality!
• Watch and share the film.
• Bring our education initiative to your school or community program
• Support our impact campaign