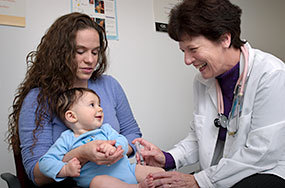 Many religious fundamentalists rationalize their rejection of measles (and other) vaccinations by claiming, "We have faith in God, not man." In his February 10, 2015, New York Times op-ed article arguing for measles vaccination, pediatrician Paul Offit writes, "It seems to me that if religion teaches us anything, it's to care about our children, to keep them safe." Fundamentalist vaccination deniers will wholeheartedly agree with Dr. Offit but, unfortunately, will insist that safety comes from God, not man.

They maintain--despite frequent evidence to the contrary--that their faith will prevent or heal disease, that they don't need or want scientific intervention. What's more, they believe that if their faith does not succeed in healing or protecting their loved ones from illness, then this outcome is God's will.

But do these beliefs mandate that they reject all scientific innovations? Does any religious scripture call for that? I don't think so. Even if one could cherry-pick Bible verses that could be interpreted to support these claims, there is an important overarching religious principle to consider. If one believes in the doctrine of creationism--that God created man--one should also embrace its corollary: that God's creation of humans includes the manifestation of human intelligence to improve life on this planet. And indeed, we (including religious fundamentalists) have celebrated (and used) human advancements throughout history for bettering our lives. Rejecting those life-enhancing or life-saving contributions must then be seen as defying God's will. Since most religious beliefs implicitly acknowledge that these life-enhancing innovations emanated from God-given abilities, they shouldn't be defied.

A popular parable graphically illustrates the consequences of such defiance. You may have heard it, but it's worth repeating. It illuminates this discussion.

As the story goes, there's a raging flood in a town from days of torrential rains and the overflowing of a river. The water level is rising, and people are fleeing, first by foot and auto. As the water level continues to rise, residents frantically enlist small rowboats and anything else that can float. One man, Jack, climbs to the roof of his house as the water reaches the first floor. A fundamentalist believer, he raises his arms and prays fervently to God to save him.

A rescue worker passes in a rowboat and shouts to Jack, "Jump into the boat."

But alas, Jack drowns. When he reaches heaven and faces God, he protests, "I'm a man of faith. I prayed and waited. Why didn't you save me?"

God answers, "I sent a boat, then a life preserver, and finally a helicopter. But you rejected all of them."

So imagine a parent whose child dies from measles lamenting, "God, I had faith that you would protect my baby. Why did you take my child?"

And God's response: "I sent you the measles vaccine, and you rejected it."

An Orthodox rabbi once pointed out to me that God makes relatively few direct interventions in the Bible, and that many miracles described in the Bible are performed by men and women who rise to tackle challenging circumstances. And that continues to be true today. People exercise divine abilities by tapping into their higher consciousness.

The story of Queen Esther is a good example of an "ordinary" biblical figure performing a miracle. According to the Old Testament (Torah) narrative, Esther miraculously saves the Jewish people from genocide by courageously defying protocol and enlisting the intervention of her husband, Persian King Ahasuerus (Xerxes I).

In modern times, among the many miraculous discoveries, innovations, and interventions, we have the miracles of modern medicine--including vaccinations that have saved millions of lives.

In the case of vaccinations developed by God's creations, faith in man may also be an expression of faith in God--especially if you believe in creationism.

Bernard Starr, Ph.D., is a psychologist, journalist, and professor emeritus at the City University of New York, Brooklyn College. His latest book is Jesus, Jews, and Anti-Semitism in Art: How Renaissance Art Erased Jesus' Jewish Identity and How Today's Artists Are Restoring It. He is also author of Escape Your Own Prison: Why We Need Spirituality and Psychology to Be Truly Free.