Not so long ago it looked like Damascus was in line to once again become a global center for art, with a burgeoning gallery scene and a growing international interest in works by Syrian artists. But glossy images from openings just a few years ago stand in stark contrast to the bloody bodies and bombed-out buildings in the headlines of 2013. World heritage sites throughout Syria are being destroyed as refugee camps in Jordan and Turkey are swelling with Syrians escaping the violence. Yet, Syrian artists are continuing to make work, building new homes abroad, and bringing their art with them. Perhaps their perseverance is a sign that Syrian art will continue to flourish, despite a revolution that has already claimed 60,000 lives. 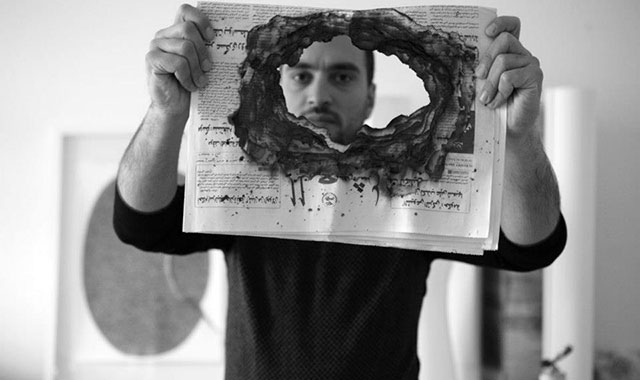 Until recently, most of the violence was in rural areas and smaller towns, while the cities remained rather safe. Galleries and art spaces in Damascus became places of refuge for artists and others forced to flee their homes. Hisham Samawi, an owner of Ayyam Gallery, one of the first and most respected contemporary galleries in Damascus, explained to ARTINFO recently:

Initially we tried to get our artists out of the outskirts where the violence was starting and bring them to Damascus. We stopped having shows and turned our gallery into artist studios. A lot of our artists who were in the outskirts couldn't work anymore because their studios were in dangerous areas. We brought them all to Damascus because for the last year and half, it was more stable and safer, and we wanted the artists to be able to continue working.

Eventually though, as the country has become further entrenched in the violence, Ayyam has shifted its focus to getting its artists and staff out of Syria altogether.

Those still unable to leave Syria are now living inside the gallery, which has moved its headquarters to Dubai. According to Samawi, they've also moved a few thousand paintings to Dubai. "The problem with Damascus is that even if the artists are there working, they might do a body of work and try to get it to Beirut, but the truck might not make it and then they've lost six months of work," he said.

Similarly, AllArtNow, an alternative space offering residencies, workshops, and exhibitions for emerging artists in Damascus, has transformed into a refuge for artists escaping rural violence. Over email, the founder of AllArtNow, Abir Boukhari, explained:

Now, I have stopped all my work because in August 2012 we offered the AllArtNow space to refugee families. We believe that part of our work is to help society and maybe right now, the best thing is to open the space for some people who really need[s] it.

Just as art spaces have been transformed, so too has the work Syrian artists are making. Many artists have made political works they never would have risked under the regime. Jaber Al Azmeh, a Syrian photographer and professor now living in Doha, created two series of photographs documenting the revolution. Fearing the regime, he only published a few of the images before leaving Syria. One series, "A Small Group of Syrians" consists of images of artists and activists holding up the Ba'ath newspaper (the newspaper of the regime), with anti-Assad messages written over the print. He explained:

I hated politics in my life, I think it's a really corrupt part of humanity and I never went into it too much. But, being a part of the revolution wasn't about being political. It's our life now, it's a matter of survival, it's our country, our people and everyone was participating.

For other artists, changes in their work have been subtler. Samawi described ways in which the work of a painter, Mohannad Orabi, has evolved since the revolution:

If you look at some of his older works, they have these figures with big dark eyes that are kind of sunken in, almost like innocent children are being portrayed. In his work since the revolution, all of his characters are a bit older, a bit more mature looking. The eyes are open and they almost have this sad, reflective look.

Before we were living in blindness and now our eyes are open to the world for the first time and it's almost like [the characters] don't like the world that they've realized they are living in.

For now, Al Azmeh will remain in Doha, Samawi in Dubai, and Boukhari in Beirut, dispersed among the much larger diaspora of Syrians. As Syrians await Assad's fall and seek safety abroad, the art that has defined their culture for thousands of years continues it's evolution in cities throughout the Middle East. As Samawi noted:

Wolfgang Laib Lays Out His Postmodern Pastoralist Art at MoMA

Terrifying Taste: 21 Despots, Dictators, and Drug Lords, and the Art They Loved