One item the University of Washington has never been short of is master plans for its landscape.

The Olmsted Brothers developed one back in 1909, as Seattle hosted the Alaska-Yukon-Pacific Exposition. "Their basic idea for the campus was to frame Mount Rainier at the heart of the campus," says Shannon Nichol, founding principal at Gustafson Guthrie Nichol (GGN), the Seattle-based landscape architecture firm.

More master plans followed with little action taken, and over time there was a convergence of pedestrian, bike, automotive, and commuter train traffic.

Fast-forward to 2008 , when Michael Van Valkenburgh Associates developed the newest master plan. "They came up with the configuration of connections, with the curve on campus lowered so buses and cars and bicyclers were pulled below," she says.

Et voila! GGN was called in to create a "fountain to mountain" walking experience called Rainier Vista. It's now a half-mile-long pedestrian mall that visually connects Red Square to Mount Rainier through the iconic Drumheller Fountain at the heart of the campus. It's also a safe way for crowds to move from Husky Stadium and a light rail station and all the traffic that surround them.

For inspiration, GGN looked back to yet-one-more master plan - this one by Bebb and Gould, a Seattle architecture firm that practiced from 1914 to 1939. Unheeded for decades, it showed trees and paths framing Mount Rainer.

"The view to Mount Rainier to campus and the view to the fountain were always there - we just framed them differently and created something so you can walk along a route from one view shed to the other," she says. "The Rainier view shed used to stop, and you had to walk through a big traffic triangle to see it."

An area called Pacific Place was lowered for vehicular traffic, and a new pedestrian bridge was built atop, extending to a green mall so that people can walk from the fountain to Montlake Boulevard to the newly framed vista of Mount Rainier.

Their hourglass-shaped bridge actually refers back to the architecture of the early campus. "We liked the idea of forms like Gothic Revival arch at the other end of mall," she says. "We used that geometry to transition the space." 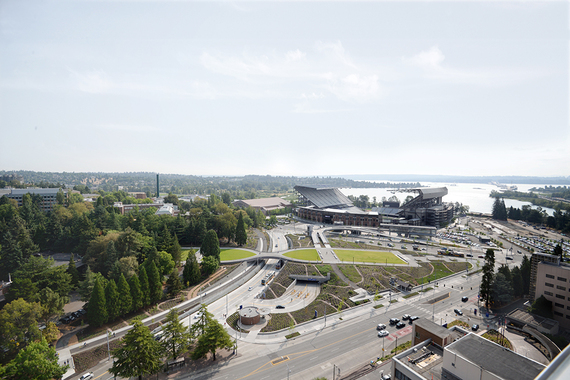 In the process, the landscape architects avoided simply laying down a heavy lid on the road below and creating a darkened area there. Instead, they chose the narrowest bridge they could design, bringing light below - and a space above where people can meet and gather.

"Now you have a place where people can cross in multiple directions," she says. "It's an X crossing of paths, so the center of the X is overlaid with the narrowest point of the bridge."

Because after all, isn't landscape architecture as much about people as it about the views?

J. Michael Welton writes about architecture, art and design for national and international publications, and edits www.architectsandartisans.com, where portions of this post first appeared. He is also author of "Drawing from Practice: Architects and the Meaning of Freehand," published in May by Routledge Press.