So if I regularly have damn good burgers, I appreciate a dense, well packed patty, and the toasty sesame-seed-speckled buns, or if I enjoy a pizza with a crusty yet soft gummy dough layered atop with sinful pastrami, whatever else and oozy cheese, or if I gush over a true blue southern fried chicken with biscuits plus a pulled pork sandwich, would that make me partial to American food culture? ( I do like them all, and more, if you are wondering!)

Or if, I gave up 2 years of my adult life to slave in a little respectable Japanese omakase restaurant and learnt, first hand and in my face, all the secrets of the Japanese kitchen, would I be regarded as a soldier of their food culture? Could I tout and hawk comforting and even grandiose versions of all those iconic flavours and be respected as an advocate and their culinary ambassador? I doubt so, especially in my case: I would not have that all-important element of soul to complete that journey. I would not have that pure local childhood joy of wonderment, that virgin innocent first time connection with the devilishly alluring smoked BBQ ribs as a naïve and curious little kid. These pure experiences would easily mould my impressionistic palate and root me to the culinary heritage of the land.

I had the pleasure to spending time recently with Bryant Ng and his ardently wired-in wife Kim Luu. They are the folks behind The Spice Table, a Singapore-Asian-inspired restaurant in LA. He was christened Food & Wine's Best New Chef this year. His family's DNA has some Singapore culture and food heritage but he's all bred and born in the USA. They made a "rediscovery" trip back to Southeast Asia to "pay homage" and reconnect with its food culture. Honestly, I wouldn't know how many trips he has to make before he can surface for air and say fait accompli, or in local speak here, "ho say liao" (all nicely done). We did the usual: tore into mean laksa, bak kut teh, salted egg yolk prawn tempura, white pepper crabs, satay beehoon, chicken rice etc. It was an amazing graze. 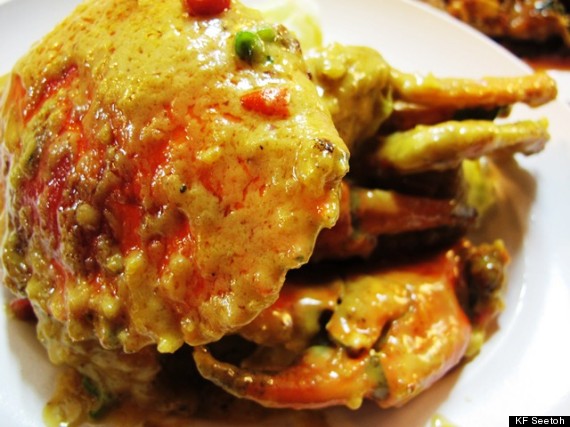 The concept "fried crabs with salted egg yolk sauce" would not make sense unless you had a soulful affinity for them as comfort food.

But it would be hard to connect, let alone reconnect, if the line was not linked in the first place. If one hadn't had humble childhood peasant pleasures like a bowl of plain rice porridge with half a boiled salted egg -- and been consumed by that purity -- it would be hard (if not impossible) to even think of introducing that earthy and salty yolk as a sauce for fried crabs, or even calamari. If you can't taste a feeling, a memory or a word, you are at best a culinary anthropologist, struggling as a chef. Damian De Silva, who junked his western culinary school training to go back to his comfort basics at his brand new Immigrants Gastrobar in Singapore, says you just can't teach recipes, "you gotta teach feel." Damian offers "lost" dishes like Eurasian Feng, a tediously done offal stew and Hakka roasted intestines, to pair with Japanese whiskeys.

But I think Bryant has an edge; he is acutely curious and openly religious with his food. His has the kind of roots that tells him just how sacred the laksa rempah is, the blasphemy of using lemon instead of calamansi lime in chicken rice chilli and the redemption in authenticity. His menu reeks of Southeast Asia, dishes like beef rendang, kaya toast, grilled pig's tail (reminds me of the vanishing Teochew Lo Mei), BBQ chicken wings accented with daun kesom, cha kway teow, Hainanese chicken rice and kon loh mee.

He is coming back again for another exploration trip soon, and I think he knows it's not just about finding flavors and recipes but finding gastro-soul in this city of unique chow. But Bryant, do consider a hop over to Indonesia, to "second" cities like Solo and Bandung. You'll be surprised just how connected you may be to these strange lands in Southeast Asia -- so as long as the yearning and hunger to approach the future with the past in tow is calling. 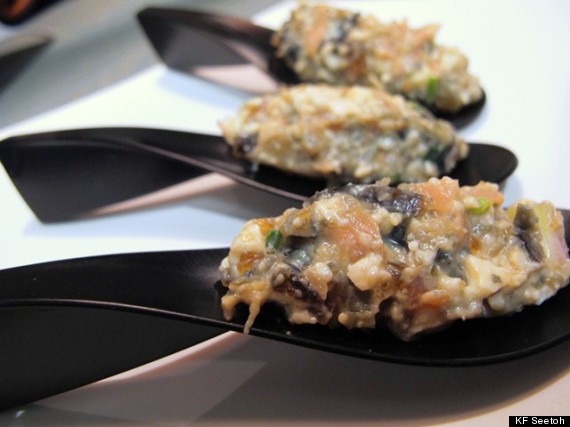 Damian's ultra-old-school Chinese dish of pickled ginger with century egg is now turned into a relish to go with good whiskeys at his Immigrants Gastrobar in Singapore.