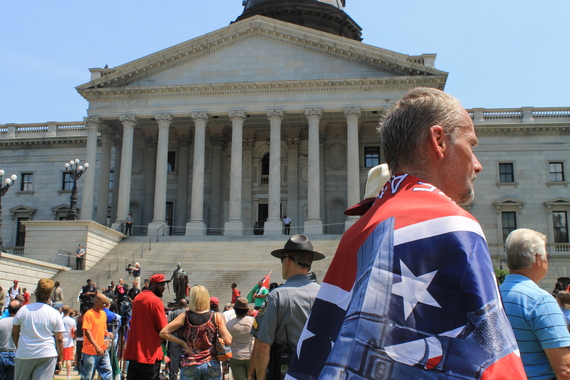 The Saturday rally planned by an affiliate of the Ku Klux Klan was meant to showcase the group's longevity despite cultural forces urging its demise. Instead, the rally only served to underscore its increasing irrelevance.

The aftermath of the shooting that killed 11 people in a historic church in Charleston, South Carolina, elicited a nationwide outpouring of emotion and grieving. The after-effects largely appeared to be shows of solidarity: President Obama gave a now-heralded eulogy for one of the victims, pastor Clementa Pinckney, which ended with the president singing an a capella version of "Amazing Grace." For their part, the government of South Carolina responded by removing the long controversial confederate flag from the flagpole above the statehouse in Columbia.

Yet not all reactions after the shooting were encouraging of racial and political unity. The Ku Klux Klan, a diminished yet still-active organization in parts of the U.S. South, began issuing leaflets after the attacks, ostensibly to intimidate members of black communities and to recruit white members.

Soon a protest of the removal of the flag was announced by the North Carolina-based Loyal White Knights, which calls itself the largest KKK affiliate. Almost immediately, a hodgepodge of anti-KKK activist groups -- one of which is known to be affiliated with the Black Power movement -- responded that they would protest the KKK's rally.

South Carolina Governor Nikki Haley (R), who was instrumental in the flag's removal from atop the statehouse, issued a statement urging South Carolinians to steer clear of the rally:

"The strength and grace the people of South Carolina have shown over the last three weeks have inspired our family, our neighbors and the entire world. Our family hopes the people of South Carolina will join us in staying away from the disruptive, hateful spectacle members of the Ku Klux Klan hope to create over the weekend and instead focus on what brings us together. We want to make the Statehouse a lonely place for them. In doing so, we'll honor those we have lost and continue to make our state stronger."

The two sides squared off this past Saturday, July 18, on the steps of the statehouse in Columbia. What was apparent from the start was out outnumbered the members of the KKK really were, with around 50 KKK protestors screaming epithets on the steps of the capitol from behind a line of police. A much larger group of counter-protestors hurled insults back. According to authorities, peak attendance at the rallies was around 2,000.

It is possible to draw several conclusions from such turnout numbers. On the one hand, it could be further proof of the diminishing power of the KKK, and of overt white nationalism in general. (Such reduced influence would be particularly acute in a city like Columbia, which boasts the vibe of a left-leaning college town.) However, it could also be further proof of racism in America further transitioning from overt to underground, particularly online; indeed, online forums were rife with anti-African American sentiment in the wake of Charleston.

It is important to note that many of the KKK supporters with whom this reporter spoke did not see their cause as racist. (At least not outwardly.) They instead justified their viewpoints and presence at the rally as being in defense of southern pride and tradition, which they see as being under threat.

"I believe it's wrong, what they did, taking our flag down and trying to take away our heritage," one self-identified KKK supporter, named Joyce, told me. "Every time something's done to black people it's considered a hate crime, but if a black person does something to a white person, they get away with it." She went on to cite examples of times in which she believed crimes committed by blacks against whites went unpunished.

Joyce was was one of several pro-KKK protesters to cite southern heritage as the reason for their appearance at the rally.

"[The flag] don't mean nothin'," a white man who identified himself as Joseph Hip told me. "It's heritage. Everybody's gotta believe in somethin'. You've got your football team, I like my flag."

Southern tradition is something many of the protesters opposing the KKK would have no problem with seeing eradicated. Such was the case of one young black anti-KKK protester with whom this reporter spoke.

"I'm from Massachusetts, but I've been down here about half my life," said the man, who identified himself as Thomas Washington. "[Racial tension] was very palpable the moment I stepped off the airplane...I walked into a Waffle House -- I'd never seen one of those -- and I would swear to you, the jukebox just ground to a halt like in the movies. And of course [the waitress] walked up with a little smile. 'Hey, sugar!' We were served last, and it kind of built from there."

The difference of perspective among the rally's competing factions led to several tense confrontations, both among the rally's participants and between them and the police. One startling case shows a KKK supporter pulling a knife on several black youths before being forced at gunpoint by a police officer to lie on the ground. In another, an unruly protestor is forced violently to the ground by police. And in perhaps the most jarring video to emerge from the rally, a group of young anti-KKK protesters are seen chasing down and beating up an alleged KKK supporter at an intersection.

A vast majority of the day's unrest appeared to occur off the grounds of the statehouse. Yet for all of the competing groups' tension and animosity, there were surprisingly few cases of outright violence reported by the police. The South Carolina Department of Public Safety issued a statement saying that only five people were arrested, with seven people brought to the hospital and no police officers injured. These numbers are a far cry from the heyday of the KKK, when the group's gatherings often led to multiple deaths on the part of black Americans.

It is within those figures that the ultimate death knell of organizations like the KKK may lie. A great number of the protesters who turned out at the capitol on Saturday did not profess to wanting violence, but instead preached comity and community. This group was represented more than any other with whom this reporter spoke.

"I'm just supporting equality," said one young black woman. "We're all the same to me. I don't see why everybody can't just get along. We all bleed the same blood."