Colombo, Sri Lanka. At a press conference at the Colombo Hilton this morning, North Carolina Congressman Heath Shuler was flanked by the Sri Lankan Ambassador to Washington and the Sri Lanka Minister of Foreign Affairs.

The American Congressman stated boldly, "I would like to congratulate the government of Sri Lanka in their victory over terrorism. We are seeing peace today for the first time in 26 years" 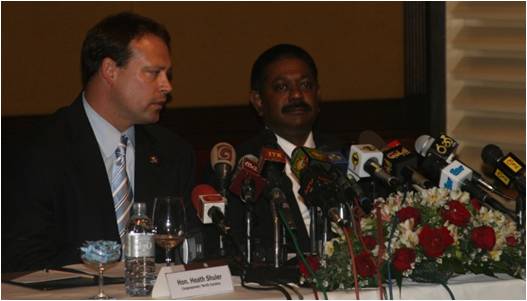 I could not have been more elated. It was the first time I have heard an American elected official seem to understand what has transpired here in Sri Lanka. As the only American journalist in the room, I was unsure if those gathered grasped the significance of his statement. 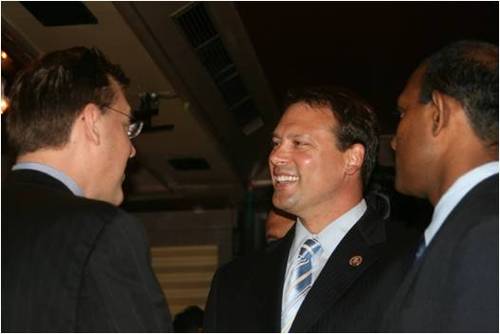 Ambassador Jaliya Wickramasuriya, whom I interviewed last week from New York, and Sri Lankan Foreign Secretary Dr. Palitha Kohona, looked as if they understood this was an important moment.

"The situation here on the ground in Sri Lanka is much different than has been reported in the U.S.," Congressman Shuler said.

"I have had open access to the government and the camps for internally displaced people, and commend the government for allowing me to come into this country and to see what I needed to see.

"At this point, Sri Lanka has such an incredible opportunity to move forward, economically, towards prosperity. Of overcoming the challenges of war, and now, embracing the possibilities of moving forward.

"I was able to go to the refugee camps, to move freely there, and to speak with the people staying there.

"I spoke to one 18 year-old Tamil woman who explained to me how she had been used for the last eight months as a human shield by the Tamil Tigers, and how she was looking forward to the opportunity to return to her home. 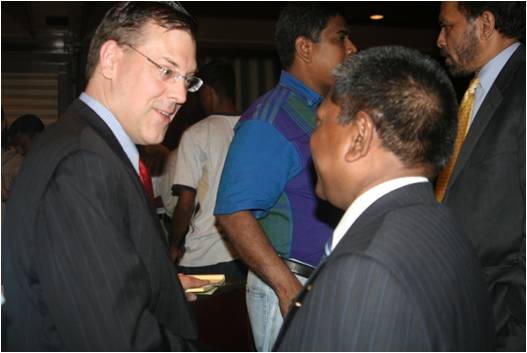 Speaking with the Sri Lankan Ambassador and Foreign Secretary.

"I commend the Sri Lankan government, as well as the international community -- USAID, the United Nations, the International Red Cross -- for their efforts. There are serious challenges ahead, but these will be met by the government and people of Sri Lanka.

"The people of Sri Lanka, especially in the south, are sending and unprecedented amount of emergency supplies -- people to people -- and in addition to that support the government is opening schools, banks, and hospitals in the refugee camps.

"In order to take the large steps needed towards reconciliation, there is a need to get families returned home. There are challenges ahead, but the people of Sri Lanka must set aside differences for the sake of peace and prosperity.

"I can go back to the U.S. now," the Congressman stated to the journalists and dignitaries assembled, "and report on what I have seen.

"It is so important to look at the lives of the people of Sri Lanka and to see how they are working together to settle their differences and move forward to obtain an eternal peace. 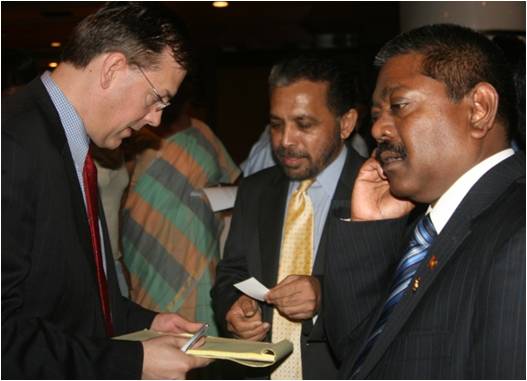 "I want to go home and explain to my colleagues the political and humanitarian actions that the government of Sri Lankan has undertaken, and to assure them that Sri Lanka has access to the funding needed to rebuild.

One Sri Lankan journalist asked if the Congressman felt the Sri Lankan-American relationship had been diminished by the conflict.

"That is the reason I am here," he replied. "I have had full access to this country and its people, in the camps, on the streets.

"It is this openness and transparency for the international community to see the progress being made in the refugee camps.

"It is important for the world to see the Singhalese, Tamil, and Muslim Sri Lankans all living together in harmony, in peace, as part of the reconciliation process.

"It won't be easy. The war has just ended. The work we are seeing now has just begun in the camps. Water, sewage, communications - even banks. The land must be de-minded, and people must be returned to their home towns as quickly as possible.

"The 18 year-old Tamil woman that I spoke to commented how in less than a week the Sri Lankan government had created conditions much better than she had experienced living in the LTTE camps.

One European journalist asked a particularly pointed question about whether the U.S. Congressman was calling for an investigation of alleged atrocities by both sides during the conflict's resolution.

"I am not here to investigate," the Congressman stated bluntly. "This is now about reconciliation. To proceed, you cannot move forward looking in the rear-view mirror. The need now is to create a sustainable peace."

Another journalist asked about Hillary Clinton's comment before the conflict ended that perhaps now was not the best time for International Monetary Fund loans to Sri Lanka.

"This is not what I understood she said," he replied.

"The work that the Sri Lankan government is doing is very helpful in terms of temporary housing, water, schools.

"I will go back to the U.S. and share with my colleagues in the State Department how important the IMF loans are for Sri Lanka's economic development.

"From tourism to trade to agriculture, it is important that this nation begin moving forward immediately to sustain peace.

"It will happen. The efforts of the Sri Lankan community will make it happen.

With that, Heath Shuler, U.S. Congressman from North Carolina -- a thought leader and global citizen -- ended his strong remarks in favor of the Sri Lankan government's efforts to move forward into a future of diversity and prosperity.

I warmly congratulated him for having been the first American political leader I have heard that actually understood what had transpired -- and most importantly -- what needs to transpire, here in Sri Lanka.