Sunshine is delicious, rain is refreshing, wind braces us up, snow is exhilarating; there is really no such thing as bad weather, only different kinds of good weather.

So said John Ruskin back in the early 19th century. Know what I say? There is, for sure, such a thing as bad weather and right about now most of us have had our fill of it. We're hungry for warmth, we're hungry for spring -- we're hungry for delicious sunshine!

St. Lucia. Did someone say St. Lucia? I'm thinking of that time not so long ago (actually only a few weeks) when I found myself languishing in sunshine as airports around the country were canceling flights, thwarting everyone's plans to escape the deep freeze. I was one of the lucky ones. I had an early morning flight to St. Lucia on JetBlue and right after we took off, all of their remaining flights were cancelled -- zero, zilch, nada for the indefinite future. When that news was conveyed to me as I lazed in my gaily striped hammock overlooking the beach, I'm sorry but I just had to stifle a small, self-satisfied giggle. Sipping my pretty pink punch while leisurely applying some SPF 45, I realized I was one very lucky girl.

The ride from the airport to my lodgings was long, but allowed me to drink in my surroundings. The landscape here was distinctly different from many of the other Caribbean islands. I was surrounded by thick vegetation and deep, verdant rainforests that draped the soaring mountains beyond. We traveled through small villages of open air markets and well-cared for homes painted in palest pastel or bright reds, yellows and turquoise, frequently encircled by a delicate white picket fence. Outside my taxi window I saw the Atlantic Ocean to my east while the Caribbean caressed the west coast. This island is just 27 miles long, 14 miles wide, and has a somewhat South Sea feel to it.

After an hour and a half, I had to ask my driver, are we there yet? Just then, he made an abrupt left turn onto a private dirt road that wound up a steep incline. As we lurched forward over rocks and ruts, misgivings set in. Where, indeed, was this driver taking me? Several more yards and he stopped. Ah... I got it! I'd made the right vacation choice. This rude, rough road was the perfect foil for what now unfolded before me: Calabash Cove Resort, my final stop. Steps led from the road to an open-air loggia -- and beyond: the sea!

I ran down the steps fast as my feet would take me to a huge balcony that gave onto a staggering vista of sea, sky, manicured grounds and in the distance, Castries, the capital. The Concierge had to coax me over to her desk to sit, settle down and calmly check in. But more of that later...

St. Lucia is located between Martinique and St. Vincent. Rising from its fertile forests are two singularly special peaks known as the Pitons. 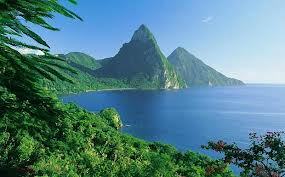 They are actually volcanic peaks in a World Heritage site. Gros Piton, south of the town of Soufriere, rises to a height of 2,619 feet and can be climbed without ropes or mountaineering experience. You can hike to the summit and come back down to sea-level within a few hours.

Raindrops Fallin' On My Head

Something tells me that when one visits the rain forest, it is always raining. 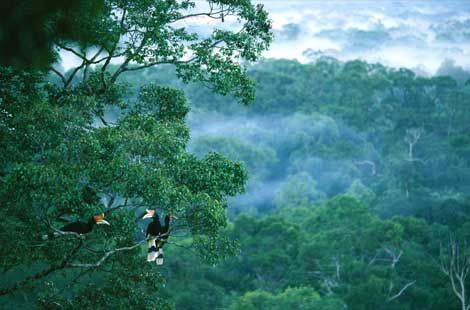 Duh. And, as Longfellow once said:

The best thing one can do when it's raining is to let it rain.

Well, I'm not so sure about that. I was sitting in a Rainforest Adventures open-air tram on my way up to the top of the rain forest when the skies opened. Rain pelted down with such fury that my skimpy plastic poncho was of no use whatsoever. This was the kind of rain you just knew wasn't going to let up any time soon. Just then I remembered hearing some chatter before boarding about this adventure taking more than two hours. So, to quote the lyrics from a Bachrach song:

I did me some talking to the sun.

Talking? I was bargaining for all I was worth: Please sun, make an appearance!

And, as happens in St. Lucia each and every day, the rain stopped, and it was sunny -- at least for a little while. Was the slog up to the rain forest interior worth it? You bet. This was nature in all its majesty. We saw the remarkable phenomenon of the strangler ficus alighted upon by hundreds of hummingbirds. There were gargantuan ferns and magnificent heliconia, too -- and our guide was able to identify the calls and plumage of many of the birds that call the Caribbean forest home. As our visit came to an end and the tram began its descent -- well, what else? Open umbrella, close it, open umbrella, close it... fun. One thing's for certain: St. Lucia's weather sure keeps you on your toes. Finally returning to Calabash Cove, I found a cozy, dry refuge to snuggle in with Kindle and a rum punch. Rain, go right ahead. We're done.

Over the next few days, I visited Sulfur Springs, unique because one can literally drive up to the edge of the boiling cauldrons. Until the mid-1990s, tourists were able to walk right up to the edge of the tar-colored pits. Following an accident when a local tour guide -- Gabriel by name -- fell into a pit and sustained third degree burns, this activity is restricted. However, the pit is now named Gabriel's Hole. Must give the dear man a lot of satisfaction and nachas.

On a Carnival Sailing catamaran, we cruised to Jalousie Beach in Soufriere. There was a bay nestled between the Pitons with water calm enough for swimming and snorkeling. The large boat was chock-a-block with tourists and we all just kicked back, allowed the navy-blue sea to do its calming magic, and made countless visits below deck for lovely munchies and good, strong rum libations. I can unequivocally say that a good time was had by all.

During my stay, I looked forward each morning to my shower. Why? It was a charming outdoor shower so I greeted the day gazing up through overhanging boughs to a cerulean sky above - and stepping between pale yellow and pink frangipani blossoms that had fallen on the floor overnight. Breakfast was a serene affair taken on the terrace with sweeping vistas of the sea while at night there was live music, cocktails, conversation, dining al fresco and then walking on the secluded beach under a black velvet sky alive with an impossible galaxy of stars.

As my holiday was ending, I sat down with Concierge Kim, wanting to find out where the real St. Lucians go for fun. She told me about a happening that not many tourists are aware of: the Gros Islet Street Party. 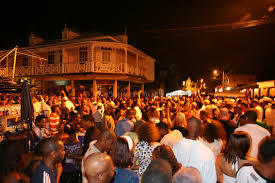 Every Friday night there's a street party, aka the jump-up. A taxi brought me to an old fishing village encompassing several blocks north of the capital with streets cordoned off by stalls of street vendors. Lots of steamed fish, curry, rice, and jerk. I sampled barbeque chicken and passed on the Piton beer in favor of a rum punch (yes, again). Blasting through it all were the sounds of calypso, zouk, reggae and R&B. 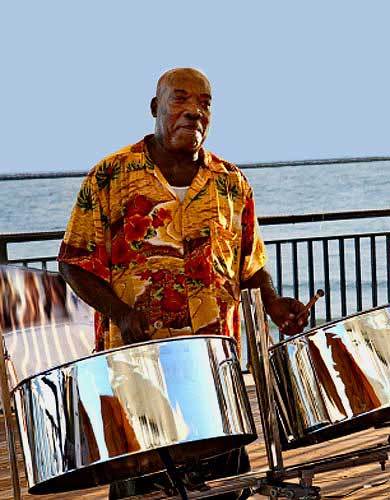 Dancing was de rigueur so it was -- grab your partner. twirl around, and go on to the next. I knew no one but hey, who cares? The point was: Friday night -- time to party. For everyone, music brings out the best and in St. Lucia, they really know how to bring out the best in their guests!