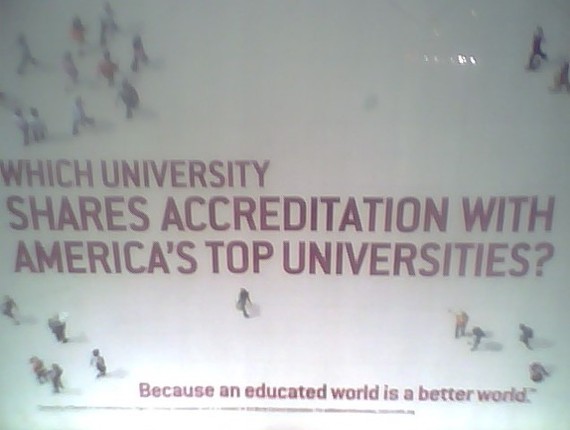 For-profit schools have not been faring too well on Wall Street lately. The stock price of Apollo Group, the owner of the University of Phoenix, has dropped by 80 percent from its peak. Career Education Corporation is also down 80 percent; ITT Education, 96 percent; DeVry, 50 percent. Corinthian Colleges, now in bankruptcy, is trading at under a penny a share, less than one percent of its value just over a year ago.

The collapse of for-profit stocks may be just the wake-up call that is needed to prompt a restructuring of the industry and of its oversight. But a telling error in Friday's coverage of the plunge serves as a sobering reminder of just how difficult it can be to keep education entrepreneurs' eyes on the right prize -- quality and value -- when get-rich-quick taxpayer money is available.

The error appeared in an article that ran Friday in The Street, an investor web site co-founded by madman Jim Cramer. The story starts out fine, ticking through the dramatic decline in stock prices and describing recent actions by the Consumer Financial Protection Bureau. The article notes, correctly, that Apollo Group disclosed last July that the U.S. Department of Education was launching a review of the University of Phoenix's use of federal financial aid.

The error appears in the next paragraph, which summarizes the findings from the Education Department's review. Citing the Arizona Republic, the article says the review of the University of Phoenix "paints a picture of a school so hungry to enroll new students that it has threatened and intimidated its recruitment staff in meetings and e-mail, pressured them to enroll unqualified students and covered up its practices to deceive regulators."

Damning findings, and an accurate reflection of what the investigators reported. But the Arizona Republic article is not from last year. It is from 10 years earlier. What is remarkable, and sad, is how much the decade-old article sounds like the more recent investigations of for-profit colleges. So much so that the analyst at The Street read the article and confused the date, September 14, 2004, as 2014.

Apollo Group surely is not pleased about the mistake. But the company might whisper rather than shout its complaint, lest it prompt the same question that led to The Street's mistake in the first place: What exactly is going on with the 2014 investigation of the University of Phoenix?

We may never find out. And here's why.

After the 2004 review, Apollo Group wanted to make sure that what happened would never happen again. Not the part about predatory recruitment practices -- that did happen again. No, company executives were upset that the results of the investigation had been seen by the public. To prevent that from happening again, Apollo went to Congress to demand that the results of investigations be shared with the company's many lobbyists and lawyers for review and response before being released. In 2008, Congress did as Apollo requested, changing the law. The revised rules gave the company the hook it needed to entangle the agency in protracted battles, arguing over whether each sentence adequately takes into consideration the company's perspective.

In effect, Congress gave education companies the right to slow down and edit investigations. All away from public view.

The change paid off immediately for Apollo. A 2009 review of Phoenix's operations reportedly raised consumer protection concerns, but in the version that was released publicly many months later, the concerns had disappeared. (I worked at the Education Department in 2009-10 but was not involved in whatever negotiations led to the change in the content of the program review).

So what is going on with the review announced last July? Is it finished? What did the investigators find? What was Apollo's response? We may never know.

If we are going to keep giving public funds to people who are allowed to pocket whatever they don't spend, there need to be stricter assurances of quality. But how can we protect against school owners' ability to befriend, cajole, bully and buy the regulators and elected officials who are supposed to be holding them accountable for their use of taxpayer funds? That's the real puzzle as for-profit education enters a period of retreat and, hopefully, reform.