Here's how the argument goes -- and do it justice by reading it out loud, and kinda yelling whenever you see words in CAPS.

"Hey, you're worried about CO2 concentration in the atmosphere going up because of human activity and causing an increase in global temperature?! GIVE ME A BREAK! It's only a TRACE gas, currently making up only 0.038% of the atmosphere, or 380 parts per MILLION!! SO WHAT if we increase it to a WHOPPING 1,000 parts per million (ppm) by 2100. Then it would ONLY comprise 0.1% of the atmosphere. BIG DEAL!! There is NO CONCEIVABLE WAY that changes in such a miniscule amount of CO2 could have any significant impact on the global environment. You're preaching the sky is falling, and ANYONE WITH HALF A BRAIN can see that this is just SILLY! YOU must be part of some Scientists-in-Need-of-Federal-Funds--Green Business--Government (SiNoFF-GB-G) conspiracy that's bent on destroying everything that is good. TAKE A WALK YOU ENVIRONMENTAL ACTIVIST IN NEED OF A CAUSE. Why ... you're likely a paid operative of the SINoFF-GB-G machine!"

Photo caption: CO2 concentration in the atmosphere in parts per million over the last 400,000 years. Credit: NOAA

Ummm ... has anybody else heard this argument, or is it just me? Here's my rebuttal (and you're still using the CAPS-means-shouting thing.)

The point of the VAST MAJORITY of climate scientists is that the trace level of CO2 in the atmosphere DOES play a critical role in the global environment. But before addressing why such a concept IS NOT PREPOSTEROUS, let's get the obvious out of the way first. The myth makers and myth propagators use the word TRACE to belittle poor CO2 -- to render its level WHOLLY INSIGNIFICANT. But anyone with just a touch of basic science education knows that -- CO2 IS VITALLY IMPORTANT FOR LIFE ON EARTH. It is both used and produced by life. If its level were so small to be a worthless consideration, then, hey -- let's take it ALL away, drop it to 0%, AND WATCH THE MAJORITY OF LIFE ACROSS THE PLANET CEASE TO EXIST. That TRACE gas seems pretty important to me. It powers a little thing we like to call PHOTOSYNTHESIS which is fundamental to the food chain. For all those that do not want to pay homage to CO2, I say -- STOP EATING. Or at least STOP throwing around the expression TRACE GAS so loosely.

Now for those that espouse the mythical view at the top of this post that "a little more of nothing amounts to nothing" is a rational argument for why CO2 cannot dramatically alter the environment, my first tendency is to go into a discussion of climate change modeling and the importance of even trace gases held within acceptable ranges. A complex biological system like THE ENTIRE PLANET EARTH reflects a finely tuned balance, with regulating systems that keep conditions within acceptable limits for life -- EVEN AT THE LEVEL OF TRACE GASES (barring catastrophic events like an asteroid impact, or super volcano, or say humans popping up in an instant and burning everything they can find in just 150 years). If specific trace gas concentrations are pushed beyond narrow limits the entire global system goes out of balance -- even past a tipping point where it moves to a new equilibrium position not conducive for vast numbers of species currently inhabiting the planet.

You could also point out that in fact life operates within narrow acceptable regimes for, e.g., temperature. Absolute zero is -460 °F (-273 °C). The surface of the Sun (exceedingly cold by cosmic standards) is 10,300 °F (5,700 °C). That's a temperature range of 10,800 °F (6,000 °C)! But a human -- YOU -- has to exist within a temperature range of just 100 °F (55 °C). Here's a way to look at it. If you represent the range in temperature from absolute zero to that of the solar surface as a 10-foot ruler, you're existence is constrained to the width of 1-inch (for you metric types, if the larger range is represented by one meter, then you're assigned just one centimeter of living space.) YOU LIVE ON THE HAIRY EDGE. YOU JUST AREN'T AWARE YOU LIVE ON THE HAIRY EDGE. You depend on Earth's regulatory systems to keep you in the happy place.

But alas, I can't use these arguments, because folks often can't get past the it's just a trace gas thing. Detailed global observations over time, careful analysis of the geological record, sophisticated climate models projecting into the future, and still you hear -- "it's all voodoo, it's just THEORY, it's a [VERY LARGE] percentage of [CLIMATE] scientists that don't know what they are talking about. And there's a [VERY SMALL] percentage of scientists that AGREE WITH ME so THEY must be right."

Ok, fine. So let's do this far closer to home. And see if there isn't something strangely familiar about this.

1. The amount of alcohol in the blood is defined by the Blood Alcohol Level (BAC.) If someone has just a little to drink, and they're BAC is between 0.01% and 0.029%, they will appear outwardly normal. What does this mean? It means that the alcohol content in the blood is between 95 and 270 PARTS PER MILLION. It is a TRACE chemical in the blood.

Now you increase the BAC to 0.11% to 0.20% and this person looses gross motor control, staggers when walking, and their speech is slurred. What does that mean? You've increased the alcohol concentration to at least 1,050 PARTS PER MILLION. Just by increasing this TRACE chemical by a factor of 4 (THAT'S FOUR) leads to system-wide imbalance in a human being -- A COMPLEX BIOLOGICAL SYSTEM.

What? The alcohol shouldn't have been there in the first place? That's different than CO2? Well this is a ROCK-SOLID example of systemic imbalance due to a 4-fold increase in a TRACE chemical. But fine, let's go to example 2.

2. Say ... hypoglycemia. We should all be able to agree that glucose is absolutely essential for body function. A normal glucose level averages about 1,500 PARTS PER MILLION in the blood. Now this one is really dramatic. If you DECREASE blood glucose by a factor of 10 to about 150 PARTS PER MILLION -- then ... COMA, and possibly ... well you get the picture.

ANYONE who thinks that changes in TRACE chemicals cannot impact complex biological systems -- after just these 2 of TRULY COUNTLESS examples -- is not reachable through reason and logic.

Now -- BY LOGICAL EXTENSION -- back to Earth. JUST BECAUSE CO2 IS A TRACE GAS DOES NOT IMPLY IT CAN'T CAUSE A GLOBAL-SCALE IMBALANCE IN CLIMATE. This myth is busted.

In the graph below, climate models indicate by the year 2100 the concentration will increase to 550 to 1,000 ppm! If we assume the average climate model projection, the Industrial Age (Age of Fossil Fuels) by 2100 will have increased CO2 concentration by a factor of 2.5 over the highest levels seen in the last 400,000 years, and by a factor of 3.5 over what was typical over the last 400,000 years! 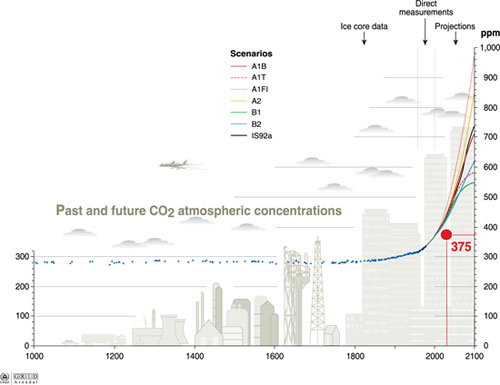 I've finished my rant. I hope many reading this have some new ammunition. But those that don't want to accept global warming as human induced will now take the argument to the next level -- increased CO2 does not lead to increased global temperature. Sounds like I've got the topic for a new post. Stay tuned to this same Bat Channel. Alfred ... have you been standing over my shoulder the whole time?

You want more PERCEPTION-CHANGING posts on Climate Change and Global Warming? Here they are at Dr. Jeff's Blog on the Universe.

Understanding Human-Induced Climate Change
How many more people on Earth in a day, a week, a month, a year? (Stunning)
The biomass of the Human race must be huge to impact climate! Uh ... nope.
Apples and the fragility of the Atmosphere