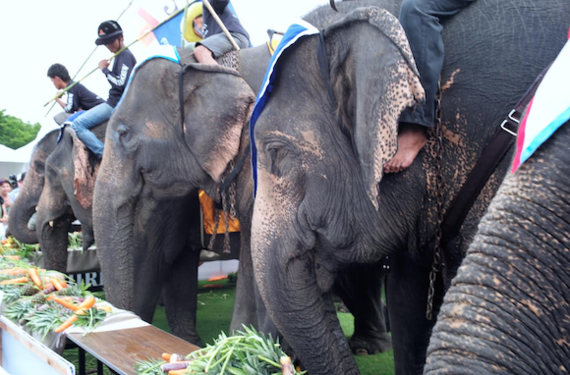 Tourists come to Thailand for many reasons: genuine Thai cuisine, which uses authentic ingredients that never make it to U.S. shores; the friendly people (they don't call it the Land of Smiles for nothing); great shopping (custom made suits and dresses in silk and other precious fabrics, made the same day for next to nothing); talcum powder beaches; Thai massages at $8 an hour; and, of course, the elephants.

There are elephant camps and elephant treks and elephant souvenirs. There are opportunities to do volunteer work caring for elephants. There's even an annual Elephant Polo Tournament, but more about that later.

No one really knows how many Asian elephants remain in Thailand. You hear 4,000, you hear 6,000, some in the wild, some captive. But everyone agrees that there are more than the uninhabited parts of the country can sustain. Thais have used (and, unfortunately, abused) pachyderms for centuries in forestry and other industries (in 1959, logging was curtailed due to deforestation and flooding). But as the need for them has decreased, the animals have become homeless, literally begging for food on the streets. Some still exist in the wild, but their voracious appetites mean that there's simply not enough land to go around, and they now occupy just 15 percent of their original natural habitat, pushed out by human population growth. The vast majority of elephants in the wild is endangered and captive elephants cannot be returned to what remains of their natural surroundings.

The situation has led to elephants now being used in the tourist industry, and it's not all pretty, although a lot prettier than the alternatives. The good news: some resorts and tour operators do a much better job than others at respecting and caring for these majestic creatures.

I spent a few days at the Anantara Golden Triangle Elephant Camp and Resort in Chiang Rai recently and got to see firsthand how at least one organization tries to make the best of the difficult situation Thailand has inherited. The resort provides a home for Think Elephants, a U.S.-based nonprofit group that studies these creatures, focusing on animal neuroscience and conservation. The Elephant Camp, which is shared by the nearby Four Seasons Resort, provides a home to a handful of animals that are available for riding, treks and, if that's all you're up for, simple observation and feeding. John Roberts, Anantara's Director of Conservation, told me that "These elephants can't be returned to the wild -- there's very little habitat left to be returned to. What would happen if elephant tourism were to be banned? Three thousand elephants would starve to death."

The Anantara elephants are certainly not starving (I helped make sure of that on my visit, feeding them bamboo and other edibles -- they eat over 300 pounds a day -- but I could not bring myself to ride one). They also get expert vet care, "work" only a few hours a day at most, and get to roam around the property, albeit under close supervision of their mahouts (human handlers). 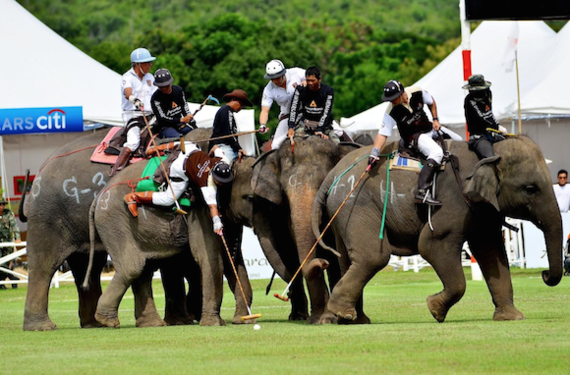 From Thailand's north, I flew to Bangkok to witness the annual 2014 King's Cup Elephant Polo Tournament, one of the major events on the country's social calendar. It's just as it sounds, almost: teams made up of employees of well-known companies such as Citibank, Audemars Piguet, Johnnie Walker, Mercedes-Benz and Pricewaterhouse Coopers, assisted by mahouts, who actually do the "driving," compete on a polo ground to knock a ball through the goal post. A charity auction, gala dinner and other events raise funds to provide care for the Kingdom's elephant population.

Although it's great fun for the polo jockeys, it's also a day out for the elephants. They get to run around for a few hours, unfettered, and only play for 28 minutes each day, compared to the alternatives, such as begging on the streets for 10 hours a day. Each elephant gets a vet check up. "Our main concern is to take these elephants off the busy streets and tourist areas and let them be elephants for at least two weeks a year," states the official brochure. It's sort of like elephant summer camp, I guess, and although again not "ideal," it's better than nothing, and the money raised goes to further the lot of these huge beasts. Plus, each elephant enjoys a buffet, gobbling down 20 stems of bananas, 50 sticks of sugarcane and 10 pineapple plants each day, although from what I saw they seemed to prefer bamboo stalks to the sweeter stuff. Maybe that helps keep trips to the dentist at a minimum.

Does Every Nation Need Its Very Own Airline?