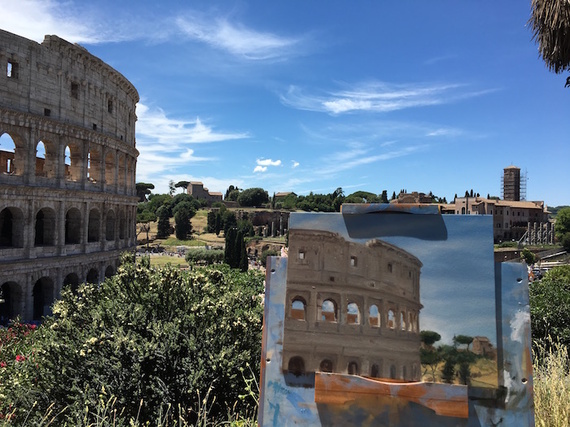 The light illuminated the Coliseum, showing off the incredible and timeless accomplishments of mankind. I haven't been to Rome in at least a decade, but looking at painter Marc Trujillo's plein air studies of Roman sites, including the Coliseum, I felt transported and inspired.

I've known Marc for years and have always found him to be the generous sort of painter who is willing to trade tips about process, place and subject. Like myself, Marc has plein air and studio practices and he applies a level of rigor to both areas that incorporates art history, color theory, photography and more than a dash of patience, humor and the drive to experiment.

This summer, I took some time out of the studio and went out into the field to beef up my plein air skills. I chose a diverse set of sites and conditions from the overcast verdant moodiness of the Veil of Cashmere in Brooklyn's Prospect Park to the rapidly changing cloud conditions on the North Shore of Kauai.

In between those plein air explorations, I was lucky enough to spend a few days with Marc in Los Angeles. We painted overlooking the Hollywood Hills and then he showed me around his studio. To give you a better sense of the artist, his work and thoughts about a range of topics, I'm including some snippets from our correspondence post-visit. This conversation in progress alongside the images gives you some insights into Marc's work, but I'd encourage you to give his work a closer look. If you're in the Los Angeles area, you can find his work as part of the exhibition The Gildless Age at Torrance Art Museum through October 29th, 2016. And please join Marc on January 26, 2017 for the opening of his solo show at the Bakersfield Museum of Art, through April 30th, 2017. 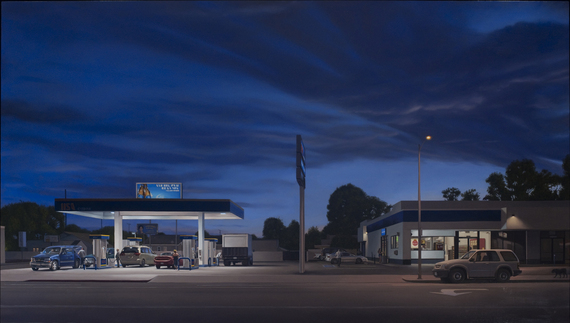 HH: What are your philosophical differences with Rackstraw Downes?

MT: Fundamentally he's a democratic painter and I'm a dramatic painter. Admittedly, the drama the figures in my paintings are involved in is at a low hum since I want the viewer to be the main figure. Also, even though I love and admire his rigorously direct observation paintings, some of the turning the head in empirical space that he does gives him a sort of fisheye view that can be symptomatic of work from photography. I prefer the pull back that's more akin to the space in William Bailey's paintings where you're seeing things from further away than you first assume as a viewer.

HH: If making is thinking, what is teaching?

MT: Teaching is helping your students become better critics of themselves.
Teaching adds accountability since you have to explain and demonstrate what you do, it's lots of communicating which can be good for you as an artist since you have to unpack at least part of what you do and present it.

HH: How does your love of Rottweilers relate to who you are as an artist?

MT: They are models of integrity, unaffected beauty, being utterly in the present, stoic about pain, and tirelessly pursue their tasks without self-regulation. I should do so well!

HH: Your wife Linda wallpapered your mudroom bathroom with your fecund figure drawings. What kinds of boosts do you get from your creative-couple synergy?

MT: I'm very fortunate and am constantly influenced by Linda's high sense of taste and style, which she's clear and decisive about. She's genuinely thoughtful and will act quickly on her goodwill. She has a great work ethic and jumps right in to get things done. She also highly values being able to make things for yourself, self reliance as a maker rather than farming out the production of something. Linda was wearing a necklace last night at an opening that she made with oxidized silver leaves, all of which she cut by hand. All of this is a constant elevating boost!

HH: You've painted 30,000 feet over Iceland out an airplane window. What are some other unusual situations you've painted in?

MT: I've painted out of bathroom windows, in all sorts of terrain, lots of kinds of places indoors and out, but sadly none of it seems notably strange to me. I'm a little jealous of the guy who was painting in slow traffic. I've drawn in moving cars, but only as the passenger. Guess I better go paint a volcano or something, or maybe traffic since LA has traffic to spare.

HH: What do you do when you hit creative ebbs and need to refuel?

MT: Acting is the thing, we're painters and are supposed to think with brushes in hand, right? This is one of the things that plein-air painting is great for, the clock is ticking, the light is changing, you are mortal and need to act. The deadliest trap is to separate the thinking from the making, to sit and stare at something blank and wonder what to do with it. Even active looking at other works of art can provide a needed nudge. There's a three-part cycle to painting for me. First, looking at paintings, which makes me want to paint and defines what painting is for me. Why should something be a painting as opposed to something else? Second, going out into the world and seeing what I think might make a good painting based on what I've learned from engaging with other paintings. And then painting itself, making paintings is the acid test for everything I thought would work out going into it, which sends me back to other paintings. When I get stuck, I've found that any one of these three components can usually get me engaged.

HH: What could Velasquez have done better?

MT: He could have been more introspective about painting in a way that would have left us with some of his thoughts on it. For Velasquez, painting was his ticket to upward social mobility and I think that some of the precious sliver of ice he had that is so convincing about his work might have come from painting being a means to an end for him. So maybe his laconic matter-of-fact-ness that pulls me in is exactly why he would have never bothered to write anything down.

HH: What hour of the day is the darkest hour of your soul?

MT: I've heard that if a patient is close to death and they make it through the 3am hour, they're more likely to live another day. Both 3am and 3pm seem like low ebbs.

HH: You've consulted extensively with art conservators to be sure your painting methods and materials are archival. What do you hope people in the distant future will find especially relatable in your paintings?

MT: When you look at a painting, you assess it very quickly like you would a stranger approaching you. Do you trust them? Do they interest you? Do you want to engage further with them? All of this happens nearly immediately and the historical context, for me at least, eventually catches up, and rarely even becomes relevant. A painting may show someone or something, but is also an autonomous thing, the painting is the place, so I would hope that rather than being historical curiosities the painting itself would carry over the way it does for me with paintings I keep going back to. Also, there's no past tense in painting, when I look at a Bruegel or a Vermeer there's only 'is' and no 'was'.

HH: If IDEO were to attempt to poach you away from your studio for a couple months, what kind of project would interest you?

MT: I'd hit you up and we could come up with a plein air painting app! We'd have to be doing lots of plein air painting to determine what would be useful - sun position, different viewing grids. Or... In the 19th century, being able to draw was more widely regarded as being an essential part of being an educated person. This makes sense to me and I'd like to both pull together research on it and lobby for visual arts in education.

HH: You draw constantly and make meticulous studies for your large scale paintings. How do your smaller 1-2 day paintings of food like Lunchables and Zingers fit into your painting pyramid? It kills me that you painted these directly without using photography or eating them.

MT: Much the same place as they would fit into a nutrition pyramid, free sugars and carbs are near the bottom, although they can rise to the top as favorites. For me the direct observation informs the more expansive studio paintings, and the smaller ones are shorter conversations.

HH: Your studio seems like a bomb shelter. Is it?

MT: Only as a metaphor. 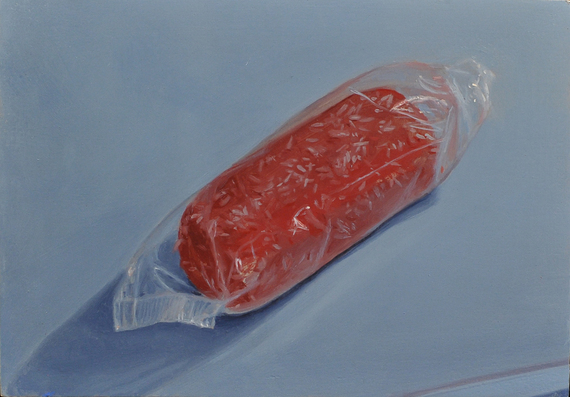 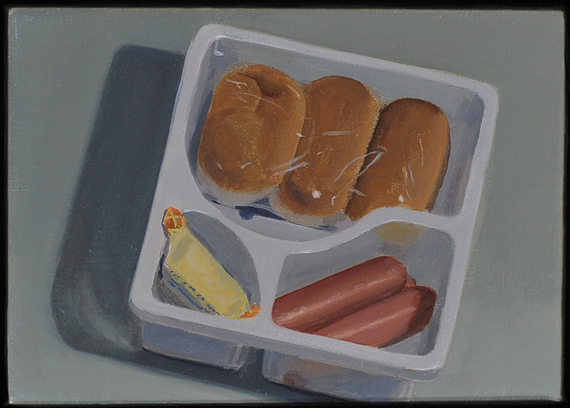 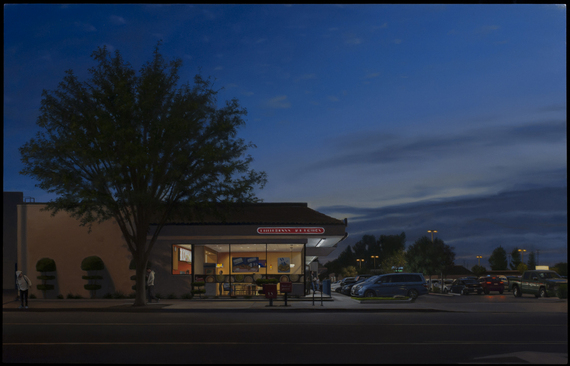 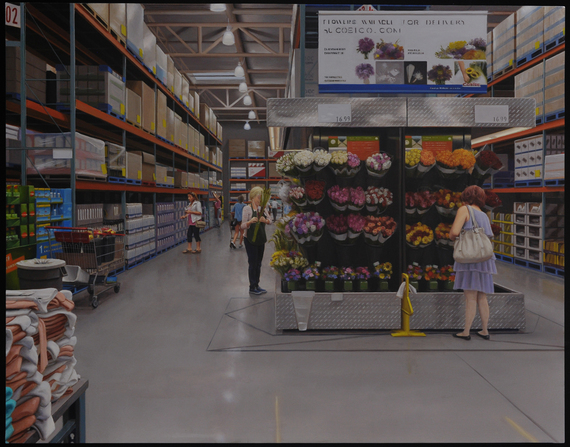 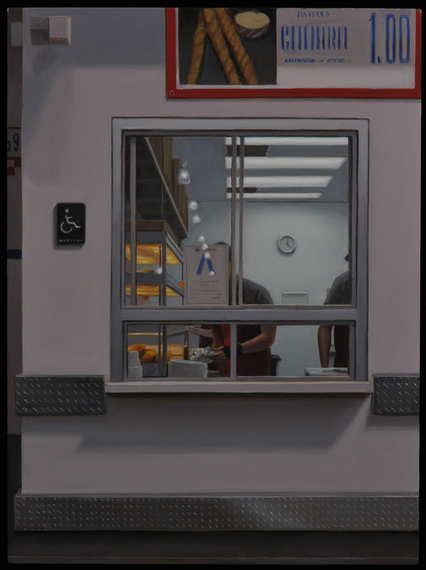