August 29th marks the tenth anniversary of the costliest natural disaster in American history. Hurricane Katrina caused more than 125 billion dollars of damage, and even more devastating, took the lives of almost two thousand people, leaving lifelong emotional scars for their families, for the city of New Orleans, the state of Louisiana, and our entire nation. Chris Tusa was born and raised in New Orleans; he moved to Baton Rouge to teach at LSU five years before Katrina touched down. Less than one hundred miles northwest of New Orleans, Tusa watched in disbelief as the Hurricane ravaged his hometown. In the aftermath, Chris and his wife housed two evacuees. In the coming years, Tusa would found the literary journal Fiction Southeast, release a poetry collection, and publish his first book, Dirty Little Angels, set in his native New Orleans. Still, the 2005 disaster, weighed heavy on his heart and mind, and he began working on a novel in pursuit of capturing the collective emotional and physical distress inflicted by Hurricane Katrina.

"My primary objective was to capture the hopelessness and desolation that permeated the city after the storm. Because of the city's long history of corruption, coupled with the fact that New Orleanians were in a constant state of emotional stress and varying degrees of grief and depression, the city inevitably became a fertile ground for anger, violence, paranoia and even psychosis. The psychological scars of Katrina were acute and widespread. We feared what another storm might do, we feared that our city would never return to its full splendor, we feared our own government. As we watched the local news on our generator-powered televisions, we listened to stories of dangerously high mold levels, of trailers laced with formaldehyde, of unsafe drinking water, and these stories only acted to further validate that fear." 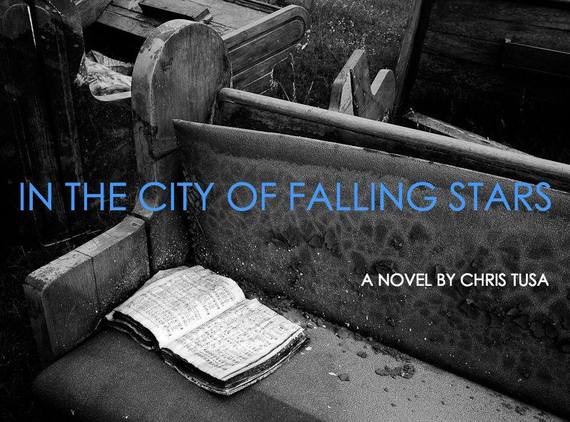 With his concept in place, Tusa penned In the City of Falling Stars, to be released by the University of West Alabama Press this upcoming March. There is a common misconception among writers that white men are only capable of writing novels filled with white men, and if they include black men in their stories, their grasp of African American culture is inadequate to accurately bring these characters to life. While this is certainly not true, it is still rare that a white male writes a novel in which its central protagonist is a black male, but Tusa took on this challenge, knowing that in order to depict the deepest wounds of post-Katrina New Orleans, he had to step outside of his race. The black community was the most directly affected community by Hurricane Katrina, and bottling that sense of loss, despair, and mistreatment, was the only means of delivering a well-rounded, important book about our worst natural disaster.

"Dead birds are falling out of the sky and Maurice Delahoussaye suspects the air in New Orleans may be unsafe. The Department of Wildlife and Fisheries claims the birds were poisoned, while meteorologists suggest they were killed by a sudden change in temperature. There's even talk of terrorism, Bird Flu, West Nile Virus, or that high levels of mold spores left over from the aftermath of Hurricane Katrina might be to blame. When Maurice expresses his fear, his family assures him that there's nothing to worry about. Gradually, though, he becomes increasingly fearful that the government is hiding an ominous secret, and when he begins having strange religious premonitions suggesting that his wife is pregnant with Jesus Christ, he soon becomes convinced that the dead birds are a sign from God. Set in the early months of 2006, against the backdrop of Hurricane Katrina and the Iraq War, In the City of Falling Stars is a tragicomedy that examines the increasing paranoia following the September 11th attacks, as well as a commentary on the devastating psychological scars that the storm left on the city of New Orleans."

Tusa has cultivated a dark, intensely lyrical novel about the horrors, fears, and the persistent anxieties that plagued the "Big Easy" in the years after Katrina decimated their normal ways of life. It is a serious book, but not one that is incapable of delivering comic relief. Just as the people of New Orleans were desperate for something to smile about, Tusa supplies dark humor that blends flawlessly into the narrative. After all, any laughs from the personally affected after Katrina touched down were rooted in the perpetual bleakness of their shambled lives, adding another layer to Tusa's authenticity. He knows the landscape of New Orleans, the people, and the complex emotional disbelief that they toiled with when their lives succumbed to mother nature in a scattered, rubbly debris. Balancing a fleeting sense of hope in the midst of the obvious, and seemingly inescapable despair, In the City of Falling Stars is quite possibly one of the most important books revolving around Hurricane Katrina to date. The 2009 release of Zeitoun by Dave Eggers delivered a riveting, disjointed and heart-wrenching true account of post-Katrina New Orleans and in the coming months, In the City of Falling Stars will give readers a fictional tale to display prominently next to Zeitoun on their bookshelves.

An excerpt from In the City of Falling Stars:

"The man took a long sip of his drink, and then got up and wandered toward the restroom. Maurice finished what was left of his drink and paid his tab. On the way home, he turned the radio to WWL and listened to local residents discuss the air quality in New Orleans, his thoughts loose from the alcohol. As he listened to the radio, he remembered that he needed to purchase more dust masks, and a few minutes later he found himself walking aimlessly through Home Depot with a box of masks under his arm. He paid for the masks, and as he walked into the blinding sunlight, he noticed a FEMA tent dispensing flu vaccinations. He stared over at the tent, thinking about everything the man at the bar had said, about how the government had exploded the levee and how they'd laced FEMA trailers with formaldehyde. Then, he remembered an article he'd read a few weeks earlier about a study that had been conducted by the U.S. Public Health Service in the 1970s on black men to determine the effects of syphilis, how over two hundred black men had been infected with syphilis, and how, despite the fact that penicillin had become available in 1947, the medicine had been withheld from the test subjects. As he walked toward the FEMA tent, Maurice thought about all the people who'd been harmed by the government, and a quiet anger blossomed inside him."

For more on Chris Tusa, visit his website: http://christophertusa.net/wp/