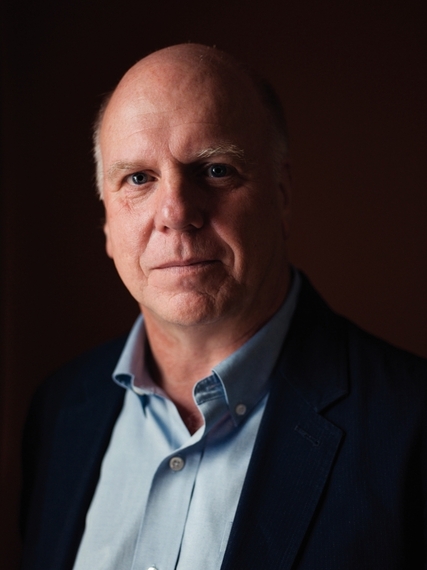 Peter Robinson is best known for his crime novels set in Yorkshire, featuring Inspector Alan Banks. After receiving a BA in English Literature at the University of Leeds, Peter came to Canada and received a Master's Degree in English and Creative Writing at the University of Windsor, where Joyce Carol Oates was his tutor. He then received a PhD in English at York University. His first novel, Gallows View, published in 1987, introduced Detective Chief Inspector Alan Banks. The Inspector Banks novels have been adapted for television and air on PBS in the United States.

Peter has received many awards, and his books have been translated into 22 languages.

In the Dark Places is the 22nd Inspector Banks novel. It blends a police procedural with psychological suspense, and begins with a simple matter of a stolen tractor from a Yorkshire farm. Soon, two young men implicated in the theft disappear. Shortly thereafter, a truck careens off an icy road in a hailstorm. Rescuers determine the driver was killed on impact, and find another body in the truck, that of someone killed before the crash. Inspector Banks and his team are drawn into an intricate web of crime, far exceeding anything as ordinary as a missing farm tractor.

You've written 22 Inspector Banks novels. How has DCI Alan Banks evolved over 28 years?
When I started, I didn't really have a firm idea of who he was. He'd just moved up to Yorkshire from London, looking for a quieter life which he didn't find. He was married with two children; and as the series has gone on, things have changed. He's still in the same career, but his wife left; the children grew up and left home; he moved from a medium-sized town to a small village; and he's become more of a melancholy isolated person. He does have a social life; has an occasional girlfriend, and likes to go to the pub to listen to folk music. He spends a great amount of time at home listening to music, reading, sipping wine, and watching the night outside. He's evolved over time. Earlier in the series, he was far more jumpy and edgy. He's lost a good bit of that as he's gotten older. But of course, he's still solving crimes.

Why do you think crime and police procedural novels attract so many people?
First and foremost, they tell a good story. People want to keep turning the pages. They what to find out what happened and why. They also want more in terms of well-rounded characters, people they can relate to, especially the hero, someone like Banks. There are other fully developed characters as well--other officers and members of the team.

I also think it's important to flesh out the character of the criminals, the victims, and the survivors of the victims--the entire range of people affected by a police investigation.

Years ago, P.D. James commented on the "Golden Age" of mystery novels, and talked about how everything was set up by the conclusion and how all the ends were neatly tied in a tidy package. The difference now is that's not always the case. Today, we're very aware that after a crime, people's lives will not necessarily be mended simply because the killer has been caught. I try to express some of that reality in the stories.

So it's not always a matter of the story bringing order out of chaos, is it?
Not anymore. That's one of the components of modern crime fiction, especially those novels featuring detectives, police officers, and private detectives. We're quite aware that damage is done. Incarcerating criminals will not necessarily solve all problems.

In the Dark Places has dialogue, especially when suspects are being interrogated, that is spot on. Will you talk about that?
I enjoy writing dialogue. I approach it just as I do an action scene or a description. Actually, dialogue is a kind of action. I have the characters go at it, and don't put any restraints on myself. The characters take the dialogue wherever they want. Basically, the cops want something, but the suspect doesn't want to give it up. If you maintain that tension--that to and fro--it works. It will occasionally get heated and hopefully, never get boring. I'll go over it again and again, cutting as much repetition as I can find, and perhaps change a phrase here or there just to make it tight and distinctive. I enjoy it most of all because it can be free-wheeling. I let myself go more when I'm writing dialogue.

Having written 22 Inspector Banks novels as well as standalones, you don't seem to be troubled by procrastination or writer's block. Will you talk about that?
Well, I do procrastinate. (Laughter). I enjoy writing, but procrastination is definitely part of the landscape. I like reading, and sometimes in the morning, rather than to get started writing, I'll be reading a good book. That's my form of procrastination.

As for writer's block, I've been fortunate so far not having had to struggle with it. But, writing is like any other job. Some days are good, and others are not. I've had days where I sit down to write, and nothing but rubbish seems to come out. I just feel like banging my head against the keyboard. On days like that, I'm tempted to give up. After two days in a row like that, I feel, 'Well, that's it. I'm finished writing.'

Even after 22 books?
Even after 22 books. (Laughter). The important thing to do is go back the next day. For all I know, it will be a brilliant day. When things go badly, I don't know why. I don't plot everything out. I think Americans call it being a 'pantser,' flying by the seat of one's pants. I find not plotting a novel is much more creative than plotting it out step-by-step. If I don't know what's happening, how will the reader? But sometimes, I do write myself into a corner. And I do get stuck. So, I go for a long walk or enjoy a leisurely lunch, and the problem seems to solve itself. It could be so simple a solution as writing the scene from a different point of view.

Speaking of plotting novels, do you base any Inspector Banks novels on actual police cases?
Not on actual cases, but certainly on crime trends.

In the Dark Places is the first book I've written about rural crime which had been in the news. I spend part of my year in Yorkshire, and while I was there, the weirdest thing occurred on a farm in Lincolnshire: fifteen-hundred sheep were stolen in one night. I tried imagining the logistics. Such a theft would inevitably lead to other things, such as the fact that those animals would be slaughtered and processed. So right there, you have the rudiments of a story.

As you said in the introduction, things far more menacing than a stolen farm tractor occur in the book.

What's the most important lesson you've learned about writing?
It's really a matter of sticking at it.

Ed McBain once said, 'If you want to be a writer, you put your bum on the seat and your fingers on the keyboard.' That's what I do, even through difficult times when it's just not flowing. I've taught courses and come across people who succeed; others are still trying; but many have given up, not because they lack talent, but because they don't really want to write. They want to have written. You've got to really love doing it. You've got to be driven to it; and the final point is to actually do it.

What would you be doing if you weren't a writer?
I would probably be teaching English in a college. I would be happier teaching English literature, but despite the Ph.D., I don't have the academic background.

I like teaching and teach creative writing once or twice a year.

If Inspector Banks were to have a dinner party and invited five guests from any walk of life, living or dead, who would they be?
He would probably invite musicians. He'd love to talk to Shubert. Also, Bill Evans and John Coltrane would be there. Bob Dylan would be invited, for sure. Probably John Keats would be at the dinner because Inspector Banks has recently begun reading poetry.

The same question to Peter Robinson, not Inspector Banks.
I'd have Thomas Hardy along with Emily Bronte to see what kind of conversation they'd have. Then, Jerry Garcia, since I was always a big Deadhead (Laughter); Graham Greene and Louis Armstrong would be invited, too.

Both Inspector Banks and Peter Robinson are heavily weighted toward musicians.
Well, we're fairly close, but we have some differences. I have to take away some of my own taste in literature, but as Alan Banks has gotten older, his reading interest is turning to poetry. But, he still mostly enjoys spy fiction.

Congratulations on writing In the Dark Places, a novel Tess Gerritsen called "Thrilling, sophisticated, and emotionally involving, this is edge-of-your-seat, heart-in-your throat suspense. A must read."