Rapid urbanization has burdened cities with an issue that no one can ignore -- unprecedented amounts of trash. World cities generate a whopping 1.3 billion tons of waste per year -- an issue that will only get worse unless strategic steps are taken.

This September, world leaders will gather in New York to formally adopt the Sustainable Development Goals (SDGs), an important 15-year agenda to prioritize and address problems affecting rich and poor countries more holistically than its predecessor, the Millennium Development Goals (MDGs). Given the extent of global waste and the projected increase in the world population, waste management is present in several of the new SDGs -- in both focused and tangential ways that show how humankind's massive waste is linked to poverty, gender inequality and job creation. The SDGs make it clear that the value of waste picking is not to be squandered.

Under the umbrella aim to "ensure sustainable consumption and production patterns," SDG 12 captures how the world should approach waste management, including recycling. In many developing countries, waste pickers are the key economic actors whose work feeds the recycling market with materials that would otherwise be dumped, especially in a context where waste segregation is not part of the culture. Recycling is one of the cheapest and fastest ways to reduce greenhouse-gas emissions and informal waste pickers are champions in recycling. A 2007 study found that waste pickers recovered approximately 20 percent of all waste material in three of six cities studied. Their work thus contributes to environmental sustainability. In some countries, informal workers supply the only waste collection available. Despite saving us from living amongst garbage, these workers are seldom recognized by municipalities.

Developing promising solutions to waste can produce significant progress in achieving many SDG targets -- from environmental to urban-focused targets. What is not so obviously outlined is how target 12.5, which states that waste should be substantially reduced through prevention, reduction, recycling and reuse, has great potential to impact Goal 1: to end poverty in all its forms everywhere. Another unseen link to SDG 12 is gender. Many waste pickers are women, so improving SWM can also achieve Goal 5, which seeks gender equity and the empowerment of women and girls. Women waste pickers are subject to entrenched sexism that is reproduced in all dynamics and relations at home and in their work handling waste, making them the most vulnerable within the sector. A gender-sensitive approach to waste management can bring effectiveness, equality, and enhanced livelihoods.

In addition to the value of recycling, waste picking is a necessity for many families who rely on trash for their survival. It is estimated that one to two percent of the urban population earns a living from waste picking; therefore, waste is key income for informal workers and vital for poverty reduction. The Informal Economy Monitoring Study (IEMS) -- a 10-city study that examines the realities of informal workers -- found that 65 percent of waste pickers in the sample were the main household earners. Lack of recognition and policies that curtail access to waste materials can have a dramatic effect on poverty levels, as it affects the livelihoods of a significant number of informal workers whose only income comes from waste.

Given this background, it is fair to say that solid-waste systems can be improved, as well as the livelihoods of informal workers. Municipalities can engage in partnerships with waste pickers by promoting source-segregation systems with membership-based organization of waste pickers as service providers. A few cities have been implementing this broader concept of sustainability by integrating environmental and social concerns. In Pune, India, the service cooperative SWaCH, supported by the waste-picker union Kagad Kach Patra Kashtakari Panchayat (KKPKP), received a contract with the city for waste collection from households, which provides a regular income and public recognition. 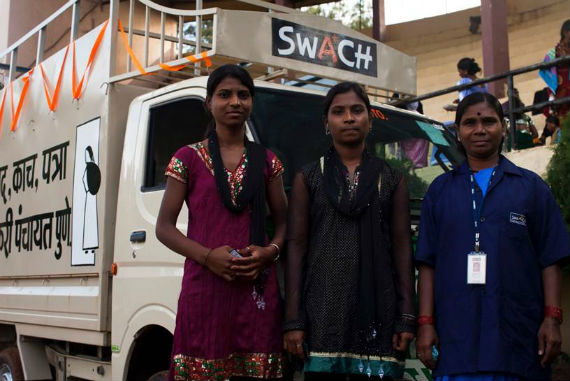 In Ourinhos, Brazil the municipality implemented a recycling system where sorting infrastructure is provided for waste-pickers' cooperatives and remunerates them fairly for their collection of recyclables. This regular income is vital for poverty reduction. Cities across the world should look for inspiration in these examples in order to duplicate achievements by harmonizing SDG 12 with other goals, such as ending poverty and securing gender equality.

The SDGs have had a fair share of criticisms. One critique claims that the SDGs "want to save the world without transforming it." This reasoning follows that the goals are profoundly contradictory because they rely on the old model of industrial growth and don't really tackle prevailing patterns of production and consumption. While acknowledging this criticism, I abide to the stance of the Frankfurt School of "theoretical pessimism and practical optimism." There is clearly a pessimist outlook with regard to how capitalist-urbanization processes have created environmental challenges on a world scale, but I truly think we have to embrace the SDGs as a strategic tool that can help us reinvent the world in a way that challenges current social and environmental injustices. Harmonizing synergies with Goal 12 is a good start.

This post is part of a series produced by The Huffington Post, "What's Working: Sustainable Development Goals," in conjunction with the United Nations' Sustainable Development Goals (SDGs). The proposed set of milestones will be the subject of discussion at the UN General Assembly meeting on Sept. 25-27, 2015 in New York. The goals, which will replace the UN's Millennium Development Goals (2000-2015), cover 17 key areas of development -- including poverty, hunger, health, education, and gender equality, among many others. As part of The Huffington Post's commitment to solutions-oriented journalism, this What's Working SDG blog series will focus on one goal every weekday in September. This post addresses Goal 12.