So now it's clear: rather than attempt any sort of policy research or political discourse, Trump has chosen Blitzkrieg. The newly installed president had barely taken his hand off the Bible but he began to implement his rally script by executive order. 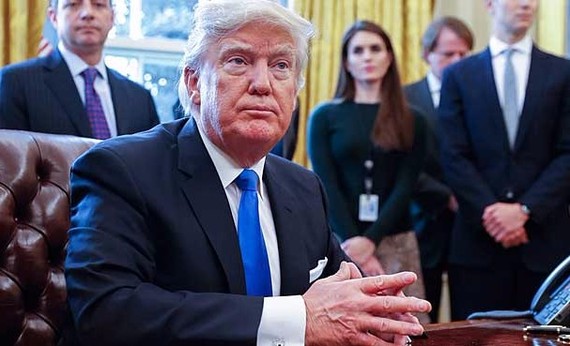 The latest of these, halting the refugee resettlement program and screening out Muslims from future admissions, will result in innocent lost lives. Other stab-in-the-dark policies may turn out to be catastrophic for America, but tactically this is smart. It means that opposition groups are drowning each other out. Pipeline opponents, reproductive rights advocates, First Amendment defenders, science advocates, environmentalists, international relations experts, economists, and friends of refugees and immigrants are all trying to make themselves heard at the same time.

Has there ever been a more important moment to come together? Five years ago in these pages I called for a Good Faith Alliance. In many ways we have done that, but as the last election showed, it is far from complete. Look at this list:

It's from the front page of the Democratic National Committee. It reaches out to African Americans, Americans with Disabilities, Latinos, Native Americans, LGBT ... all the way to "young people and students," yet it implicitly excludes the white working class. That's a huge mistake. As Mark Lilla wrote in the New York Times, "If you are going to mention groups in America, you had better mention all of them. If you don't, those left out will notice and feel excluded."

But it's not really a matter of writing a longer list. For resistance to succeed, we not only have to come together in a Good Faith Alliance, we have to be willing to focus on the most urgent causes for the greatest number of people, even if those don't happen to be closest to our hearts. I'm not saying we should throw refugees to the wolves -- no one care more about refugees than me. I'm saying we need to support one another's causes and join forces in the broadest possible front.

Think about the enormous success of The Women's March. It was great to see a number of men taking part, but how many more might have come to a march for all? Now, there's talk of a scientists' march. And perhaps others as well. But if every interest group goes at this on its own, the most unpopular new president in modern history will have his way. Blitzkreig will be followed by Divide and Conquer. We can't let that happen. We cant wait for another Martin Neimoller to recognize that, truly, we are all in this together.