My father's family raised goats in a little village called Silimna
near Tripolis in the Peloponnese. My mother's family hails from the
sundrenched island of Icaria, far from mainland Greece and a world
onto its own.

Me, I am a runner. It's in my blood. Had I been born 2,500-years
earlier I would have been an esteem hemerodromous, just like
Pheidippides. Instead of battling the scourges of modern-day America,
I would have been battling the Persians at Marathon. What's in my DNA
cannot be altered, that is a battle not worth fighting.

How did this come to be? Perhaps owing to my Greek ancestry, beginning
at a young age I was fascinated with endurance and discipline. Some of
my earliest childhood recollections are of sitting quietly in Saint
Sophia Greek Orthodox Cathedral in Los Angeles listening to an
exhaustive Divine Liturgy, largely delivered in Greek, punctuated with
endless refrains of, "Kyrie eleison," (Lord, have mercy) always
thrice-repeated with the final verse delivered slower, more drawn out
and deliberately, "Kee-ree-e e-le-ee-sawn..." as if to be saying, "Okay,
Lord, we really mean it this time, have some mercy will ya please!"
Get a Greek Orthodox Archbishop going and you could be up for days on
end. These sermons were not known for their brevity.

Yet, I would sit there attentively for hours, even as I watched other
people falling asleep at the pews. Many used to tell my parents that I
was going to be a priest one day, but the truth was I had little
interest in the sermon itself (what 5-year old boy could even
understand this stuff?). What interested me was exercising my ability
to keep myself still while sitting attentively through something I
barely understood for hours on end. I had a deep desire to master my
body and mind, and sitting idle within the church's sacred Nave
engaged in protracted liturgical worship was the acid test of
willpower and self-control.

Another early memory was that of our Easter Picnic festivities. Greek
Orthodox Easter was, from what I could tell, one massive party. Never
had I seen so much wine and raucousness taking place in a single
location. The quantities of food and celebration were beyond belief,
but what really struck me were the older Greek men dancing endlessly
without rest. Most of them were from, "the old country" (i.e., they
were Greek immigrants) and they seemed a bit less interested in food
and carousing and more interested in moving with incredible form and
exquisite mastery to the rhythmic strumming of the Hellenic Sounds
playing away on their dual 8-string bouzouki's.

Most of these men were in remarkable shape, lean and fit with
beautifully preserved olive skin and a head full of peppery grey hair.
Their faces were chiseled and taught, and they danced with whomever
would dance with them, and even by themselves when everybody else
tired. These were hardy men, resilient and determined, wise to the
ways of the world, men who had endured hardship and struggle far
beyond anything their domestic American bred offspring would ever
know. My grandfather immigrated to the U.S. when he was 14-years old
with 20 dollars in his pocket and the hope of foraging a new life
in a place far removed from the hills of Greece.

In between sets of music when the band was taking a break, I would
watch these men exchange shots of a clear liquid from a little
handheld glass they held, sometimes hoisting this memento into the air
before consuming (I later learned the contents of which to be Ouzo).
When the band gathered the energy to resume, these men were the
first back out onto the dance floor.

Our family would leave sometimes near midnight, and the final people
remaining at the festival were the old Greek men, still dancing as
though it were noon. Their endurance was extraordinary.

Why I would remember these particular things as a child I do not know.

A final childhood memory was that of a footrace during kindergarten.
We would be racing against the 1st and 2nd graders, too, and they were
older and stronger. From play during recess, I knew I wasn't the
swiftest kid around, other boys and girls would frequently outsprint
me. But this was a contest of four laps around the schoolyard.

The gun sounded and we all took off. Some kids went out at a full on
sprint pace, racing as though they were running a hundred yard dash.
By the end of the first lap I was somewhere in the middle of the pack.
By the end of the second lap many of the initial sprinters were
complaining that the race was too long. But the teachers kept telling
them that it was four laps and to keep going. Most of them quit or
started to walk.

At the end of the third lap nearly all of the kids were walking from
exhaustion or sitting on the sidelines. I just kept chugging along,
not really paying attention to my position because there were so many
kids in front of me.

But, come the fourth lap, something remarkable occurred. I passed the
final kid and found myself in front of the pack leading the race. This
surprised me, as it is hardly what I'd expected the outcome to be.
Even more startling to me, I still had lots of energy left. I just
kept running along, not feeling very tired at all.

I came across the finish line a full half lap ahead of the nearest
rival. Not once had I slowed or walked, I just kept going at a steady
pace throughout the duration. I felt like I could have kept going, I
wasn't even tired. 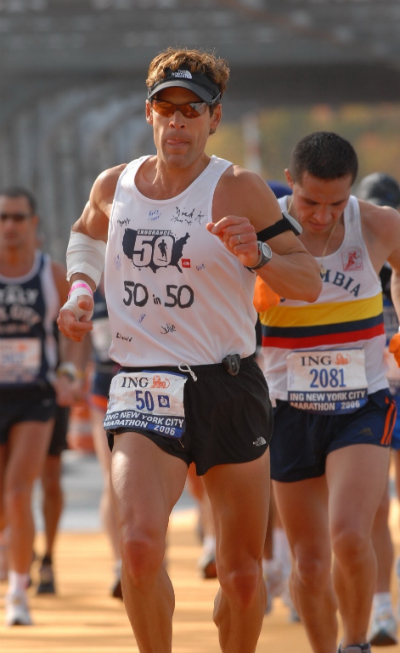 The teachers didn't seem to make much of it, initially at least. They
just congratulated me and then went about corralling all of the other
kids in an effort to get us back inside the classrooms. Later that
day, however, I started to notice side conversations between teachers,
and then they would look over at me. I could tell they were talking
about me, but I didn't know what they were saying. But this happened
on several occasions, and I thought they might be saying something
good. Who knows, really? I was only 6-years old and feelings and
emotions were the presiding cognizant awareness, not logical thought
and intellectual analysis. For all I know now they could have been
making fun of me.

Either way, I didn't really care. Yeah, I had won the race, but
running laps around the playground didn't particularly interest me.
What I really loved was running home after school. This was where true
freedom could be found. Screw running around in circles within the
confines of some caged manmade institution; real adventure took place
outside of the school walls.

Running through the park, chasing the ducks around the lake, breathing
the open, clean air blowing in from across the Pacific, marveling at
the great expanses before me, this was the stuff of life. A man's
education didn't belong inside a classroom, not even at six-years old.

Why is it these thoughts and experiences were some of my earliest
childhood recollections? This remains anybody's guess. Nature?
Nurture? Who's to say? Perhaps we really were born to run and some
people feel this intrinsic primordial instinct stronger than others?
Perhaps the hemerodromoi spirit had been passed along through the ages
and my living out this natural calling was simply manifest destiny? Or
maybe it was on account of my mom pushing me around town in a stroller
from sun up to sun down beginning from the day I was born? Then again,
she is Greek, too. So perhaps she was unconsciously living out her
inherited linage.

Whatever the case may be, it is who I am. I love to explore, and my
two feet always took me to where I wanted to go.

My father insists that we hail from the same village as Pheidippides,
the original Greek marathoner. I always remind him that I grew up in
Southern California, not the mountains of Greece. And besides, I tell
him, mom's side of the family is from the island of Icaria. "There are
plenty of hills in Icaria, too," he reminds me.

"Do I really want to follow in the footsteps of Pheidippides?" I ask
him, knowing full well that the ancient Greek foot-messenger is
alleged to have died after running from the battlefield of Marathon to
the Acropolis to deliver news of the Greek's victory over the invading
Persians forces.

"What more noble way to go," he laments.

I think he was kidding, but in a strange sort of way I could relate.

___________________
Renowned ultramarathoner Dean Karnazes was named by TIME magazine as one of the, "Top 100 Influential People in the World." He will be traveling to his ancestral motherland in October to lead the Navarino Challenge, a three-day festival of running and health.

To learn more about the Navarino Challenge, visit: www.navarinochallenge.com/