On Sunday morning, during an appearance on CNN's New Day, I made a statement that was incorrect, so, in the interest of historical accuracy and honesty, I need to issue a correction.

I was debating Ron Crews, the head of an organization called the Chaplain Alliance for Religious Liberty, on the issue of cadets at the Air Force Academy being forced to swear religious oaths that end with the words "So help me God."

When responding to the usual rhetoric about the founders and oaths, I pointed out that the first military oaths under the Constitution, written by the founders in 1789, did not include the words "So help me God," and that these words weren't added until much later -- not until 1862 for officers, and 1962 for enlisted personnel. Unable to argue with these historical facts about military oaths, Mr. Crews tried to change the subject by launching into a completely unrelated and irrelevant story about how religious the founders were, saying:

"Well, I find it interesting that on the same day that this complaint was filed in 1781 Congress heard of the American victory at Yorktown and they immediately processed en masse to a church in Philadelphia to give thanks. That's what our founders did in 1781 when they heard the victory they -- Congress left the hall that they were meeting in, processed together to a church to give thanks. That's the founding of our country."

I wrongly assumed that there was no truth to this story.

Here's the video of the whole segment:

I assumed at the time that Mr. Crews's Congress-goes-to-church story was was just one of the many similar stories I've seen and heard over the years that have no truth to them whatsoever, such as the one about the Constitutional Convention marching to church to pray for three days when things weren't going well, so I said that story wasn't true. In this case, however, the story actually was basically true. It was just exaggerated a bit. The Congress did, in fact, attend a church service on the day that the news of the victory at Yorktown reached Philadelphia. They didn't immediately jump up and march off to church, as Crews said, but they did go later that day.

When word reached Philadelphia on the morning of October 24, 1781 that the British had surrendered at Yorktown, a city-wide celebration began, and part of this celebration was a church service performed that afternoon by one of the chaplains of Congress, Rev. George Duffield. A resolution was introduced by Edmund Randolph that the Congress attend this afternoon service together, and it passed. According to newspaper accounts of the day, the celebration began at noon, with an artillery salute being fired in the state house yard, coinciding with the ships in the harbor also firing a salute at the same time. The church service was at 2:00 p.m., and it was reported in a Philadelphia newspaper a few days later that "the honorable the congress, the minister of France, the council, the chief officers of the state, and a considerable number of great and respectable characters, both in the civil and military line, attended." So, yes, the Congress did attend this service.

Of course, even a true story of the Continental Congress attending a church service in 1781 still has nothing whatsoever to do with the issue at hand, which is the constitutionality of cadets being made to swear religious oaths at the Air Force Academy.

What is relevant about the members of that 1781 Congress who attended that church service, however, is that many of them were the very same men who, in 1778, wrote the oath signed by the officers of the Revolutionary Army -- an oath that not only didn't include the words "So help me God," but also left a blank space for each officer to fill in for themselves whether they were choosing to "swear" or "affirm."

This was the oath signed by George Washington and all his generals and other officers: 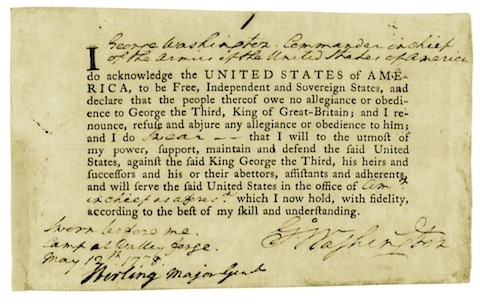