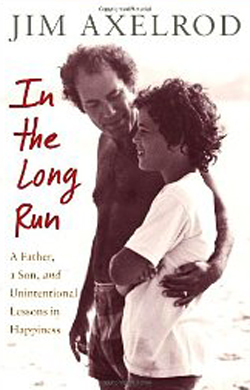 In the Long Run: A Father, A Son, and Unintentional Lessons in Happiness
By Jim Axelrod
Farrar, Straus and Giroux
304 pp.

Gotta check Twitter! Survey the last five minutes of chatter. Check for RTs, @mentions. Over to e-mail. Work e-mail first. Dash off responses to two e-mails. Now Gmail. Read through the daily news digest that hits that time of day, but only about halfway through. Just remembered that piece I need to read. Google. There it is. Open it. Check headline. Scour first graph. Need to check for Facebook messages. Nothing there. But look at what Melissa posted! Ok, I'm getting distracted. Close that ...

How many hours of productivity and creativity have we lost to this maniacal routine? Has it left us more fulfilled, at peace, ready to give of ourselves to our loved ones? This pace -- this urge to create and consume news and information faster and faster -- has it enhanced our media culture and our national conversation? To those of you who do not feel at times like you are going nuts in the total information age: my congratulations, my condolences, and pass the Adderall.

For the rest of you, there's Jim Axelrod's new book, In the Long Run, a raw, penetrating and deeply moving look at the impact of fathers on their sons, the price of ambition, and the pressures on those in the professional world that lead to a false definition of success -- all told through Axelrod's struggle to train for a marathon, to follow in the sneaker-steps of his late father.

Axelrod, a top CBS News TV reporter, says that during his runs "a quieter mind descended on me... that's what I was after." A quieter mind.

Axelrod touches most deeply when writing about the impact of his father on his own life, especially when he pulls up memories from his early childhood. His description of his father's "strong hands" pulling him out of a ride at Disney World and "pulling me close to his chest, warm and safe" made me think of how I am perceived by my own young son. What mundane moment is my son going to remember years from now? I need to make them all count as much as possible. Now, ultimately, I'm a believer that the totality of moments is what matters. I don't need to fear that if I lose my temper just once or don't do my best every second then my children's earliest memories will be tainted forever. But what was alarming was Axelrod's portrayal of how his father "left" him early on: "Not physically. Nothing that clear. My dad steadily withdrew into his own confusion, overmatched by the responsibilities and implications of the life he'd assembled around him."

Now we're talking. Axelrod relates that as a young boy he could tell when he was "wholly cherished" and could "hold the attention" of his father. He knew when his dad was "entirely present" and when he wasn't. If that doesn't strike home in the age of playgrounds filled with blackberry or iPhone-obsessed parents, then nothing will. Do my children know I am "entirely present" with them? Not if I can't resist the urge to know if my existence on the face of this earth has been validated by an e-mail in the last 120 seconds.

Validation. That's at the root of another big lie exposed in Axelrod's story. We are told, and believe, that professional achievement equals success. But what if you reach the end of your life a rich, famous or established professional, and yet your friends and loved ones say you were an asshole? Or a coward? What if your wife feels unloved and your children are unhappy? We can't control those outcomes, but we certainly influence them, and it's hard to argue that success can be achieved in a vacuum outside the realm of our interpersonal relationships. In fact, those relationships would seem to constitute the most important parts of our lives and so they should weigh heavily in determining whether our lives have been successful or not. But we want to be validated. And while we might get a smile or even some admiration for being a family man or woman, validation often comes primarily from the professional realm.

Our priorities are screwed. But we're going 150 miles per hour. We have no time to stop and think about whether the choices we are making are good ones or not. Axelrod knows this as well as anyone. He had been crushing it at CBS News for a decade when his life began to fall apart.

That's where his book begins. He's with then-presidential candidate Barack Obama at a Houston campaign rally in February 2008. His confidence is sagging. So is his waistline. He and his wife are on the rocks. He hasn't seen his three children in weeks.

A friend's e-mail stirs up memories of his father, who would undoubtedly have answered: 'Yes.' But he died a decade earlier. In an attempt to recapture some control of his chaotic life, Axelrod decides to start training for a marathon. The goal, at first, is to beat his father's time. By the end, he realizes that a big reason he's been suffering is his insistence on following his father's path in life too closely.

His father ran the 1982 New York City Marathon in 3:29:58 when he was 46-years-old. Axelrod sets out to beat his time, but is going about it all wrong. As he tells his younger brother about his debilitating injuries suffered while trying to gut out training runs, his brother dispenses some plain advice that addresses not only his running ills, but also our modern pace and the twisted psychological and metaphysical deformities driving it: "Slow down Jimmy. You'll go farther."

I got to know Jim a little working alongside him in the White House press corps covering the last two years of George W. Bush's presidency. The chatter at the time was all about how boring it was to cover a lame duck president. Not for me. I was drinking it all in. But for Jim, it was a death knell for his upward trajectory. I had wondered why he left Washington and went back to New York after Barack Obama was inaugurated. He tells the story of his professional humiliation with refreshing honesty and in vivid prose. His retelling of a brutal meeting with then CBS News President Sean McManus is particularly poignant. Axelrod goes into McManus' New York office intent on earning consideration to replace Bob Schieffer behind the desk of "Face the Nation." McManus cuts to the bone: "There's no way I would consider you."

Axelrod is humble enough to recognize a blessing in disguise. "I'd come to Washington to become extraordinary. What a moron ... But I was lucky. Before I did any irreparable harm, I failed," he says. He's able to say this because he has his family back. Over the years he had religiously followed his father's mantra - "Never say no." But this meant life-threatening trips to Afghanistan and Iraq despite his wife's concerns and in spite of the risk that he might orphan their three children. It meant time away for weeks on end covering the 2008 campaign. All great assignments.

"Assignments like the Clinton campaign didn't come along very often in a reporter's career," Axelrod writes. But he came to a point where he realized that while "that had always been enough to counterbalance the consequences of taking them," the reward had become far less valuable than what he was losing.

In the end, it's only either failure or some combination of continual awareness, grace and a little luck that keeps the ambitious -- in this case those in power and close to it in Washington -- from losing their minds and sacrificing what's most important. As a husband and father who also happens to be a political reporter assigned to cover the 2012 presidential election, I read Axelrod's book closely, hoping to learn from his mistakes so I don't make them myself, and grateful to him for his honesty and courage to own up to his failures.

It won't be easy. I'm doing a final edit of this book review from a coffee shop in Concord, N.H., after racing around the state for the last 24 hours chasing Jon Huntsman. And the Granite State won't even hold its primary for close to a year. But like each trip so far, I'm not wasting any time on the road. Huntsman will be here three more days, but I'll be home tonight. If I miss anything, that is a price worth paying to be with my wife and kids this weekend.