He was walking in his hoodie, carrying Skittles and an ice tea. He was selling cigarettes. He was selling CDs. She was pulled over for changing lanes without signaling. He was pulled over for a broken taillight. He was walking down the stairs, because the elevator was broken. He was standing on his front porch. She was sleeping on her grandmother's couch. She was standing with her boyfriend on a corner.

A man's body is slammed against a car, he is wrestled to the ground, face smashed into pavement. My head hurts, watching, feeling the rub of the asphalt. I have been here before. The familiar sense of suffocation. Hard to breath with your face in the concrete. Subdued, they are sitting on him, on me. He is tased. I am tased. I am shot. In the chest. I can't breathe. In the back, it is on fire. I am lying there, I use my hand to reach up to touch the bleeding space. I am dying. I am dead.

He is us; that is our blood oozing out onto the pavement, our children weeping as our image is plastered in the media.

He is dead. We are dead. Reciting from our graves the names of the all-too-many killed at the hands of the state or by those who know the state will exonerate them.

A little girl sits in the back seat, her mother is praying over and over again, "Please Jesus, don't let them have killed my boyfriend." He is bleeding, slumped over, a pulpy mess where his arm should be. She watches, she listens, and we see what she sees, hear what she hears. There is a policeman holding a gun in the window, pointing at him, who is moaning. Mommy is talking into the phone, making a video. She has to get Mommy's purse. Now we are in the police car. Mommy is crying, she is losing it. I am afraid, but I think she is more. I tell Mommy, "I am right here with you."

The man is dead, they killed her childhood.

They killed our childhood, they killed us all, and we and our children are screaming, and afraid, and traumatized. Their blood is in the ground, which is crying out, "How long, O Lord?"

Our dead bodies choking in the dirt struggle to scream, "When will it end? When will our lives matter, when will Black Lives Matter?"

We know this hatred is not inherent; we know that are not born to hate. We learn to hate.

It starts with a suspicion, that the so-called Negro is inferior, fueling fake science to support the hatred. Biblical myths have fueled the hatred. Cain kills his brother Abel, and God is angry. Cain is marked or cursed with dark skin or Black skin. Southern Baptists used this so-called curse to justify slavery. Brigham Young -- the second president of The Church of Jesus Christ of Latter-day Saints -- the Mormon Church -- used this so-called curse to argue, in 1852, that Blacks could not be priests in the denomination, a ban that was lifted 125 years later. Noah cursed his son Ham, and according to some Jewish, Muslim, and Christian believers, the curse was for his progeny to be slaves.

And so it is, condoned by broken theology, and now by cultural conscription, that Black lives matter so little in our nation that they can be pummeled, kicked, tossed, tased, trashed, shot, killed, and discarded. With little consequence. With impunity. As though they are less than animals.

This hatred of Black flesh so deeply imbedded in our culture. It must be addressed for the sickness and sin it is. 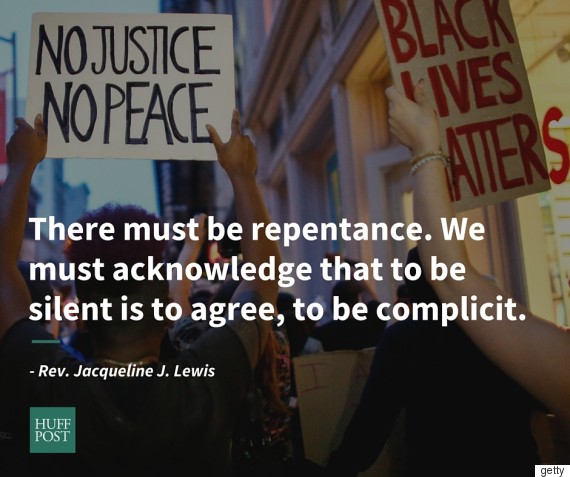 What must we do?

1.) There must be repentance. We must acknowledge that to be silent is to agree, to be complicit. That we have not done enough, must be whispered in confession booths, must be prayed from pulpits, must be preached in sermons. God's creation includes beautiful Black bodies and when we disregard their lives we disregard the God who created us all. We mock God, and that is not acceptable.

2.) We must create a revolution, a love revolution, that acknowledges that each body is awesomely and wonderfully made in the image of God, who delights in all flesh, in Black flesh. The revolution is specific, it begins with each relationship. An acknowledgement of particularity. A deep listening of story. We cannot be conceptual revolutionaries, we must not be closet prophets. We must know an "other" and love them and carry them inside us at all times. With empathy.

3.) We must revise the narrative. The story of White supremacy is a lie that must be disrupted on the level of culture, society, and legislation. At the level of system and government. And this must begin at home at our dinner tables, in our congregations, at our fellowship hours. Our outrage must create a revised narrative, a new story. A story in which all of God's children are seen and cherished as wonderful, gorgeous, beloved, valued, fabulous, awesome mirrors of the image of God.

4.) And though this work is for all of us, I would be remiss if I did not say that White people have a special role to play in changing this story. You who have privilege must own it. There is no more time for denial. You who have privilege must teach your children that they have privilege and with it comes responsibility. To open doors for others. To share power, to step back from power. To learn how to follow Black lives into the trenches, and to be willing to be taught. You must be willing to learn. Read Black history, because it is your history. Bring those stories to the classroom, to the church school room, and to the pulpit. Read the Bible for the stories of the people of color in it. Disrupt the Whiteness of Jesus/Yeshua and claim his Afro-Semitic roots. You must tell other White people that they have power and you must not mince words. You must -- because you are truth-tellers -- tell the truth. Because the truth will set us all free.

Hatred is coming for us; you know this. It is coming for immigrants, for Muslims, for Jews, for Sikhs. It is coming for gays, lesbians, for bisexual and transgender people. Hatred is coming for anyone who is "other," and it is coming for Black bodies, for Black men, women, and children. And so we who believe in freedom must come to understand that when a Black body is killed, we have been murdered. When a Black child is hungry, our nation's stomach must growl. When a Black grandmother goes to the polls and can't vote, our rights are being dismantled. When it is done to the least of us, to the marginalized ones of us, it is done to us. To you and to me. To the Christ who calls us into mission. We still have a race problem in America. In the matter of Black lives, church has work to do.