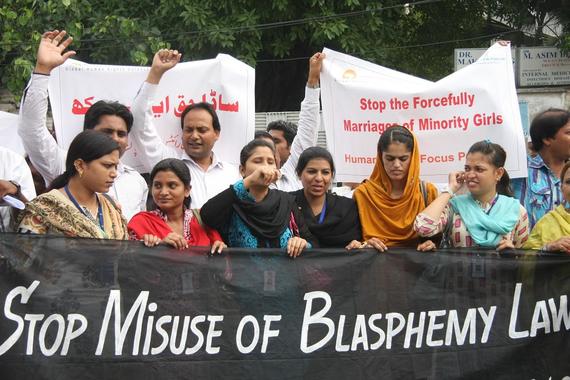 If you have an enemy in Pakistan and you want him to be killed in such a way that no one blames you then the solution is "simple." Just accuse him of blasphemy with respect to either remarks against Holy Prophet (PBUH) or desecration of the Holy Quran. If more than ten people believe your accusation (and needless to say that they will believe you even without a proof), you will be aided in your objective by three "stakeholders."

First, a "peace" loving mob will assemble and try to kill your enemy by beating and lynching him. If it is in a "right" mood then it may even opt for stoning followed by burning the accused alive. The examples of this stakeholder providing "instant" justice are several. One of the most famous was in 1994, when Hafiz Sajjad Tariq had allegedly committed blasphemy in the city of Gujranwala. He had accidentally dropped Holy Quran on a burning stove. Being a religious person, he panicked and merely exclaimed, "Oh God, I have sinned and burnt Holy Quran," words that were unfortunately heard by a neighbor who had just entered the house. The neighbor went out and started screaming that Hafiz had burnt Holy Quran.

What followed next was horrifying but perhaps not unusual. Soon there were announcements from the loud speakers (I hate that device) that Hafiz had burnt the Holy Quran. The mullahs were urging Muslims to show their "love" for Islam and the Muslims in that city obliged. Hafiz was dragged out of his home and beaten up. At that point police came and took Hafiz into protective custody. But charged up Muslims wanted "justice" and so a mob of thousands gathered outside the police station and demanded that Hafiz should be handed over to them. The police buckled under pressure and handed Hafiz to the crowd. Crowd stoned him to death and then burnt his body. Afterwards the burnt corpse was dragged in the streets. Of course needless to say this instant justice was subsequently repeated many a times. This method is extremely effective and is the shortest route for you to take. So if you get "lucky" your enemy will die a most horrible death.

Bu then mob at times has a collective mentality of its own. At times, it may prefer to give Pakistani legal system a chance. In Pakistani legal system the sentence for blasphemy ranges from imprisonment to death. In all probability the crowd will take the accused to Police ( of course after beating him/her black and blue) and hand him over. Our Police, bound by law will arrest him and book him under non bailable offence category. At this point, even your enemy would perhaps want to be in jail as a release on bail would mean certain death. The most glaring example is of poor Aasia Bibi who was made to sit on a donkey and then handed over to Police.

Once the case starts, the accused most likely won't have proper access to defense lawyer as no one would be willing to take the case and those who take the risk, are likely to meet the fate you have planned for the accused. The most recent example is of Rashid Rehman who was killed for defending young lecturer at Bahauddin Zakariya University. During the trial, Media will cover the case but won't say a word in your enemy's defense. In this way, the case will be in spotlight in such a way that it would become extremely difficult for your enemy to get any semblance of a fair trial. Of course, no higher official or politician will speak in your enemy's defense given what happened to Salman Taseer and Shahbaz Bhatti.

But this is not all as mob will help you several times later also. It will come to your assistance as the decision of the case is about to be announced by assembling outside the court and literally forcing the poor magistrate to decide against the accused. Once again you can refer to one of the "best" examples, Aasia bibi and if you want more comfort, you can also look at the famous, Salamat Masih case. Salamat was a fourteen year old illiterate minor accused of writing blasphemous remarks on wall. He and his father were sentenced to death by lower court and hundreds of "peaceful" demonstrators were outside the court making sure that the judge gave a verdict of their choice. By the way, due to international spotlight the case was subsequently heard by High Court and both the accused were acquitted. This time also, a mob assembled outside the court. However, the court decided to acquit the two accused. Subsequently one of the two judges was killed . So the horrible fate of the judge will be on the mind of any judge hearing your enemy's case.

In case, the "justice" is getting delayed ( and you know that justice delayed is like justice denied) then do not worry. There is every likelihood that the third "stake holder" will play its role as someone from a banned ( ok not so banned) organization will just kill the accused outside the court or at times even inside the jail.

By the way, even if no stakeholder succeeds or you are getting frustrated than you can simply kill the accused yourself. Although, you may be taken into custody but lawyers will fight with each other to fight your case. Moreover, you will be showered with rose petals and even mosques will be named after you! Of course, the judge listening to your case will be under huge pressure to acquit you and even if he sentences you, he will either be shot or forced to flee the country. You will have a right to appeal and no judge in High Court will even dare to sentence you. You will also acquire a legendary status in the collective psychology of our "peace loving" nation.

The above paragraphs have been written in a satirical tone, but nevertheless depict a harsh reality. In Pakistan and for that matter in many other Muslim countries, such incidences are happening. The sad reality is that such incidences paint the Holy Prophet's name ( Peace Be Upon Him) in negative light, something which those who endorse harsh punishment for blasphemy claim to care for. This is what my fellow Muslim brothers and sisters have to understand. If you want the world to consider Islam as a religion of peace then do not act or endorse any kind of violence in its name. If blasphemy means disrespect of our Prophet (Peace be Upon Him) then remember, the real disrespect to his name is brought upon by those who kill in his name.