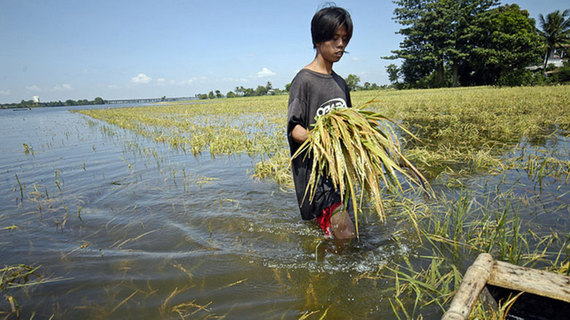 For the first time in history, the number of people living in extreme poverty has fallen below 10%. The world has never been as ambitious about development as it is today. After adopting the Sustainable Development Goals and signing the Paris climate deal at the end of 2015, the global community is now looking into the best and most effective ways of reaching these milestones. In this five-part series I will discuss what the World Bank Group is doing and what we are planning to do in key areas that are critical for ending poverty by 2030: good governance, gender equality, conflict and fragility, preventing and adapting to climate change, and, finally, creating jobs..

Seawater is rising in coastal Bangladesh. The soil contains more and more salt as the sea encroaches on the land. As a result, farmers see their crops declining. Communities are hollowing out, as working-age adults move to cities. Freshwater fish are disappearing, reducing the amount of protein in local diets. And in the dry season, mothers have to ration drinking water for their children -- in some areas, to as little as two glasses a day. Climate change is finally being taken seriously in the developed world, but it is generally seen as a future threat, to be managed over the coming years. For poor people in poor countries, particularly those living along coastlines, in river deltas, or on islands, it is a clear and present danger -- and increasingly, a dominant fact of life.

Without rapid action, the outlook is bleak. The World Bank estimates that the impacts of climate change - such as more frequent natural disasters, droughts, floods, and food price spikes - could push an additional 100 million people into poverty by 2030. Africa and South Asia are expected to be the hardest hit. In Africa, lower crop yields could lead to a 12% rise in food prices, in a region where people spend as much as 60% of their income on food. The result? A 23% increase in severe stunting, caused by malnutrition. If we are serious about ending extreme poverty and fulfilling the Paris climate agreement, then we must act now to help poor countries as they face the rapidly growing impacts of climate change. Part of this effort is the World Bank's fund for the poorest, which is integrating climate action and development in a way that has never been done before. The good news is we know what works, and many of these solutions are already being put in place on the ground. Let me highlight three key areas: First, agriculture is the main source of income for the 70% of the world's poor who live in rural areas. Expanding the use of climate-smart agricultural practices will be essential if countries are going to achieve long-term food security while reducing poverty. In Senegal, the World Bank helped scientists develop seven new drought-resistant varieties of sorghum and pearl millet adapted to local growing conditions. On average, the new seeds yield 1 to 1.5 tons more per hectare than traditional varieties. These seeds have been distributed to farming cooperatives around the country. Second, climate change and disasters pose major obstacles in the fight against poverty. This is one reason that all World Bank projects in the poorest countries are screened for these risks and programs are adjusted whenever possible. Among the most powerful tools for building people's resilience are social protection programs that are flexible enough to respond to a changing climate. When droughts in Ethiopia caused food shortages and famine in 2011, the country expanded its Productive Safety Net program from 6.5 million people to 9 million in just two months, and extended benefits from six to nine months. These safety nets remain affordable, and have reduced the need for costly humanitarian interventions. Another urgent need is resilient infrastructure -- roads, bridges and buildings that can withstand weather and climate extremes. In Mozambique, following widespread flood damage in 2013, the World Bank worked with the government to ensure roads were constructed to high standards of climate resilience, and helped pilot improved designs and new maintenance techniques. Finally, new opportunities to tackle climate change and poverty are also emerging as the price of renewable energy falls. Solar power and other renewable sources hold out the promise of affordable, reliable energy in underserved areas, such as rural and remote communities and urban slums. Renewable energy can help countries avoid being locked into dependence on fossil fuels and high emissions as they develop. At the World Bank, we are committed to adding 5 gigawatts of new renewable energy capacity -- enough to power 25 million homes -- for the poorest countries over the next three years. Some of the most innovative solutions will likely come from the hardest-hit countries and communities, as they struggle to adapt to the changing climate. The role of women will be particularly important. Women are more vulnerable than men to climate impacts, but women are also leading -- for example, by setting up water cooperatives, piloting new agricultural techniques, and using off-grid energy to power small enterprises. These communities and countries on the front lines of climate change deserve our full support. Inaction is not an option. In an interconnected world, climate change can contribute to volatility -- higher food prices, conflicts, migration -- that can easily cross borders. And delay is not an option. We have a window of opportunity now to help poor countries increase their resilience and prepare for climate change. The next few years will be critical. The longer we wait, the higher the cost - in resources, political will, and most importantly, human suffering.