In the years after World War II, Americans' love affair with the car reached full flower.

To the post-war generation, cars were a symbol of maturity, prosperity and freedom. Acquiring a driver's license was a "rite of passage" for young people -- something that was ideally done as close to one's sixteenth birthday as possible. Having access to a car was a young person's ticket to freedom, friends and adventure. For American families, a car was also a ticket to the "good life" in the suburbs, away from crowded and increasingly troubled cities.

America's post-war leaders -- and those in the generations that followed -- satisfied Americans' demand for mobility by car by engaging in the greatest road-building endeavor the world had ever seen, at great public expense. They embarked on the largest public works project in human history up until that point, the construction of more than 40,000 miles of Interstate highways. And that grand road-building project has continued even up to the present day; since 1980, American road builders have constructed an average of more than 22,000 new lane-miles every year. 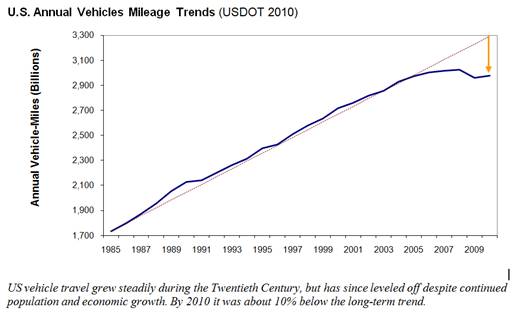 The open road that once beckoned to an earlier generation of young people has been slowly replaced by congested highways traversing a landscape of suburban sprawl. Once a symbol of freedom and America's can-do spirit, the automobile has become for many a financial straitjacket that limits life options, as well as a symbol of the nation's enduring dependence on oil. Urban living - whether in cities, older suburbs, or new mixed-use neighborhoods - is getting a serious look by many young people anxious to avoid long commutes, be close to friends and activities, and lessen their environmental impact. Meanwhile, the emergence of the Internet, mobile technologies and social networking has upended the way Americans, especially younger Americans, interact with each other and the world.

There is now little room for doubt: many Americans' transportation needs and desires are changing. And they are changing fastest among the people who have the most to gain or lose from the investments we make in new transportation infrastructure: the young. A new report from the Frontier Group and U.S. PIRG this month, which I co-authored, shows:

There are several reasons to believe this trend is here to stay. A major factor behind the change is the spread of digital technology. Americans, and especially youth, tend increasingly to connect with one another through social media. Driving while surfing the web or texting just isn't safe. Thirty-five states have outlawed texting behind the wheel and the National Transportation Safety Board recommends banning all portable communication devices by drivers. The more people are connected by information technology, the less they may want to drive.

The report also shows that young people in particular say that they prefer to live in walkable smart growth communities than sprawl. More than older generations, they say that they will sometimes choose to take alternative transportation as a way to help the environment.

Will our leaders notice this important trend? You wouldn't know it looking at Congress. This year the House almost passed a transportation bill that would have eliminated dedicated funding for public transportation. The Senate passed a bill that would have done little to change federal priorities. Without finding agreement, the federal government defaulted to continuing with the dysfunctional transportation law that was written in 2005 -- before data from these new trends were even published. America will keep building tens of thousands of new highway miles every year, while neglecting public transit and infrastructure for biking and walking.

America's transportation preferences appear to be changing. Our elected officials need to wake up and make transportation decisions based on the real needs of Americans in the 21st century. 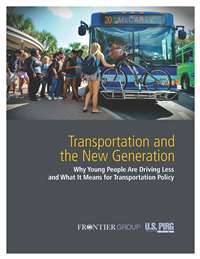