Just released official data show that Americans drove a billion fewer miles in April 2012 compared to April 2011, despite a slightly better economy. It's now well known that Americans, led by youth, have been reducing their driving since the middle of last decade.

Less known is that the biggest shift away from driving comes from young men, the demographic group traditionally most obsessed with cars.

First to recap. After a six-decade trend of ever-increasing driving, Americans as of 2011 drive 6 percent less per capita than in 2004. As the Frontier Group and U.S. Public Interest Research Group found earlier this year, the decline is particularly strong among young people. Americans between 16 to 34 years of age drove a whopping 23 percent fewer miles in 2009 than 2001. These same youth meanwhile increased their bicycle riding by 24 percent and increased their miles rode on public transit by 40 percent. 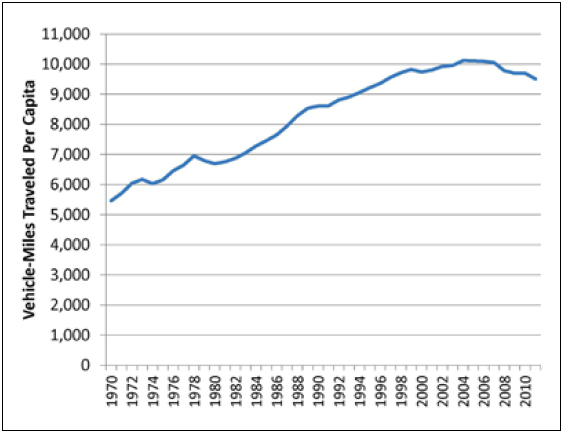 Comparing this data between the sexes provides new insights on the broader shift. Men of all age groups still drive more miles than women, largely because they are more likely to commute to a job. But young men reduced their miles more than twice as fast as their female counterparts between 2001 and 2009. Vehicles miles travelled by women fell by over 13 percent during this period to an average of 7,111 miles in 2010. Miles driven by men during these years fell from 12,434 to 8,769, a drop of 29.5 percent.

The standard bearers for America's obsession with driving are now leading the charge against it. 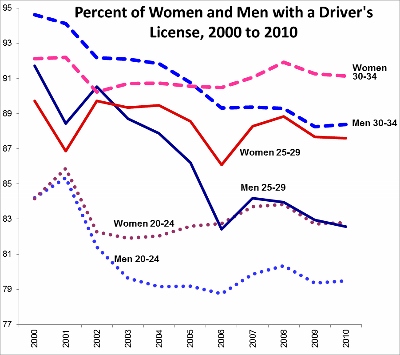 Young men have traditionally been an anchor for a car-focused culture. Since World War II, guys have traditionally been identified with their vehicles. The automobile has represented a path to independence, an enhanced peer status and adventurous road trips. Boys dreamed of what model their first car would be and referred to other guys by the types of cars they drove. Social boundaries were defined by who had access to wheels and who rode with them. Think of your favorite James Dean movie or the TV show Happy Days.

Undoubtedly, a contributing factor leading to larger reductions in driving among men has been the relatively larger employment losses suffered by men during the recession. The shift away from driving, however, is about more than short-term economics. The reduction in miles driven started years before the economic downturn or increased gas prices. Data also show that affluent and employed youth have decreased their driving as well.

Regardless of the gender mix behind the wheel, lawmakers need to catch up with the times. This week the U.S. House and Senate agreed on a multi-year transportation spending bill that turns the clock back by further prioritizing highways over other modes of travel. Congress should stop trying to enlarge their grandfather's highway system and should instead focus investment on improving transit and other transportation alternatives. The infrastructure that gets built today will mostly be used in the decades ahead by today's youth. And James Dean isn't among them.