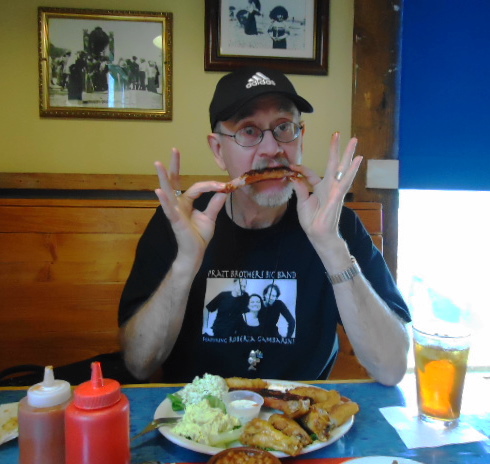 My spouse, ribs raised, in the shadow of The Peachoid.

"Southern barbecue is the closest thing we have in the US to Europe's wines or cheeses; drive a hundred miles and the barbecue changes."―John Shelton Reed

"There are no ideas in the South, just barbecue."―Pat Conroy, "The Prince of Tides"

In Season I of the Netflix miniseries, "House of Cards," Gaffney, South Carolina's monumental, million-gallon, big-orange-bottom of a water tower (known by locals as "Mr. Peach, or "The Moon Over Gaffney") plays a starring role, right alongside Kevin Spacey and Robin Wright.

The Peachoid, which looms over I-85, is any repatriating South Carolinian road-tripper's first real assurance that, yes, Virginia, you've made it home.

Luddite that I am, I saw the Netflix series well after the hoopla surrounding it broke, but just after my annual road trip home to Upcountry South Carolina, stomping ground for some eight generations of my and my mother's Boleman, Smith, Shirley, and decidedly Cherokee forebears.

When US House Majority Whip Frank Underwood (Spacey) is compelled to make a flying trip back to his district, and Gaffney, to quell a primary threat centering on The Peachoid, you could have knocked me over (where I sat watching the DVD in my New Jersey living room) with a strand of corn silk.

The Peachoid?! Featured in a big-budget, internationally acclaimed, low- disguised-as-high-brow TV serial about the festering swamp of iniquity that is Washington, D.C.? The Peachoid!?

Well, shut my mouth and kiss my grits!

My husband and I had just dined on chopped BBQ pork (in Lexington-style sauce), St. Louis-style, dry-rubbed ribs, cole slaw, hushpuppies and berry cobbler (Oh, and pitchers of sweet tea) in the shadow of The Peachoid, at Gaffney's superb Daddy Joe's Beach House BBQ & Grill. (I've had the menu sitting here right next to my laptop since we got back from our monumental drive back north, our SUV filled to the gills with fresh peaches, peach preserves, peach cider, chow-chow, red sweet pepper relish and a Moon Pie or two, picked up during our annual stop-over at Cowpens' Abbott Farms.) 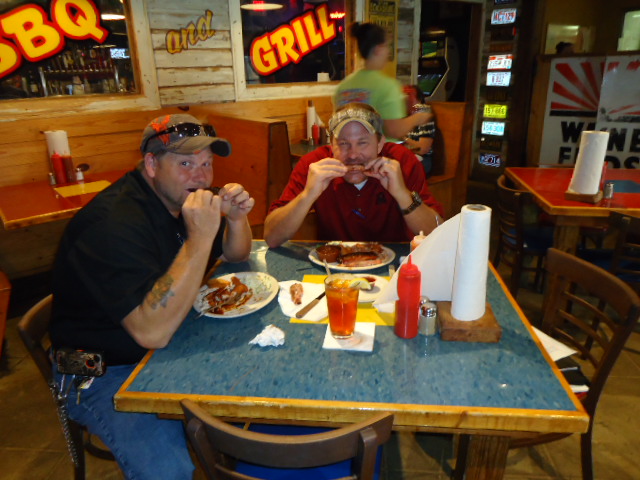 We stayed in Central, SC this time south, just outside Clemson, where I used to teach journalism at Clemson University and, purportedly, I was down there to see my first cousins in Barnwell and research the Boleman side's Cherokee roots in Reed Creek, GA but, in fact, my spouse and I both freely admit that the real reason we head to the Upcountry every summer or fall . . . is for the barbecue.

Funnily enough, Spacey's character in "House of Cards" shares this eternal jones of ours for smoked, slow-cooked, Carolina pork, though DC, and anywhere else I've eaten barbecue, cannot hold a candle to what's served in the foothills of The Great Blue Ridge.

There are three places we try to hit every trip down and, since two are open only three days a week, Thursday, Friday and Saturday--I believe the proprietors would simply die of exhaustion were they to open on additional days--it takes some figurin' to work all three places into our schedule. Even Dean and I cannot eat pulled pork three days running, though we have, on occasion, done so.

The three emporia of pork we recommend in The Upstate are: Liberty SC's Circle M BBQ; Pendleton SC's Smokin' Pig; and, of course, Daddy Joe's, in Gaffney.

This summer, we managed only to eat at The Smokin' Pig, elbowing our way through an off-hours, Thursday crowd to light into the sweetest pulled pork on the planet, and Daddy Joe's, again arriving off-hours, but managing, this time around, to meet the owner--his name is "Shag," naturally--in situ. 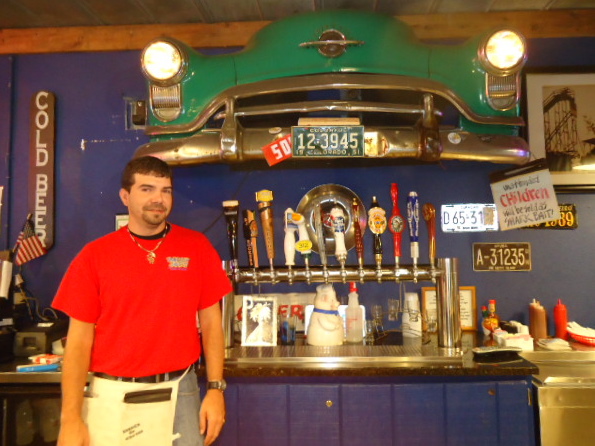 Bartender, dispensing under a beach-music-era bumper in Gaffney.

The Circle M will have to wait a few months but, next time, we'll be calling ahead from New Jersey to reserve our full racks of baby-back ribs. During football season at Clemson, you have to reserve your ribs at The Circle M or you get there and every last scrap of barbecue's already spoken for.

The pork at Daddy Joe's, however, never seems to abate. The place is open all week long, for lunch and dinner, the bar (topped with the front end of a mid-20th-century sedan) is fabulous, and the cooks are ready and willing to cater events for up to 5,000: Shag has got his smoked pig production line in high gear, yet has sacrificed none of the quality.

Congressman Underwood would be in hog heaven.

The thing I most love about Daddy Joe's though, truth be told, is not the food. It's the place's harking back to the South Carolina beach holidays of my early childhood. My first cousins--from Spartanburg and Barnwell SC--spent many summers on "The Strand," at Myrtle and other nearby beaches, and they were old enough to enjoy dancing "the shag" to beach music of the 50s and 60s.

Brought up in Pasadena and Europe, and the last-born in my tribe, I missed out on a lot, but you can cut the "Carolina beach shack" nostalgia with a butter knife at Daddy Joe's, and it resonates with any Upstate Southerner over 50.

Though I came to beach music late, entering the University of Georgia's Henry W. Grady School of Journalism in 1967, I did sneak into barbecue joints, way under age, and hover on the periphery with my older classmates to catch such acts as The Swinging Medallions, a group out of Greenwood SC best known for their hit song, "Double Shot of My Baby's Love."

The dives I snuck into back in the late 60s in Athens, Georgia were after-hours clubs often raided by the local police. They were unique in being "integrated" establishments: as throughout that entire transitional decade in the South, all the musicians were usually Black, while the patrons were young and decidedly White. The music and the moves were always pure-T soul, however, and they persist on the Carolina coast and in the memories of my cousins and our ilk.

Walking on the flat, white-powder Carolina beaches, dancing the shag, listening to the hits of Black and blue-eyed-Soul musicians . . . and consuming vast quantities of barbecue were what summer was all about for my closest relatives. I may have come in on the tail end of it all, but Daddy Joe's décor, playlist, and menu still tug at my Southern heart-strings. (To get just a little taste of the ambience, have a look at "Shagging on The Strand" [] and listen to The TAMS' covers of the biggest beach music hits.) 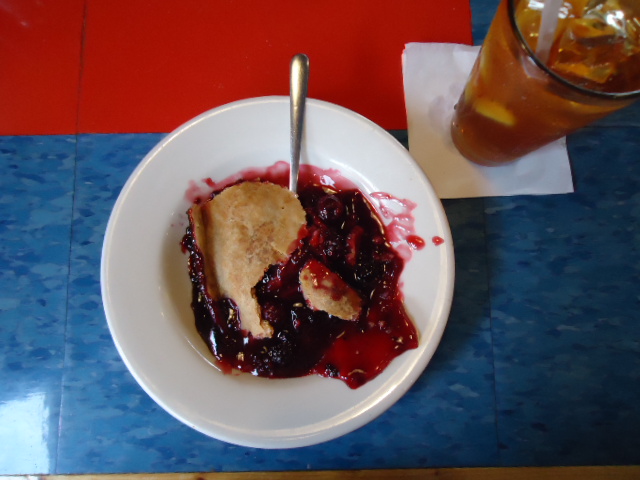 It all wraps up with a summer fruit cobbler, and more sweet tea.

Clean, peel, and core 2 Cups of peaches and mix with 1 cup sugar and 1 cup water. In a saucepan, bring mixture to a boil and then simmer for about 10 minutes. Stir often, making sure sugar is completely dissolved.

Put 1 stick of butter in a deep baking dish and place in oven to melt.

Combine 1 Cup sugar and 3/4 Cup self-rising flour; stir in 3/4 Cup milk slowly to prevent lumping. Pour this over the melted butter. Do not stir!

Spoon the fruit mixture with syrup on top, gently pouring. Still do not stir! Batter will rise to the top during baking.

Note: Other peach varieties (or other fruit) may be used, or a 28-ounce can of fruit in syrup, when fruit is not in season. (Feel free to add 1 Cup fresh blueberries to 1 Cup fresh peaches for a special treat.)