At a recent dinner with a group of ex-pats in Dhaka, the subject of cholera came up, as it tends to when I'm around. It was a warm evening and we were seated outside, sipping our drinks and fighting off mosquitos. When one of the other ex-pats at the table (a consultant for a European fashion label that manufactured its clothing nearby) asked me what I was doing in Bangladesh, I explained that I was working on a research project to develop new tools for managing dehydration in children with cholera.

"Cholera?" he asked in surprise. "Isn't that like something out of a 19th century novel?"

"Actually," I replied, a bit surprised that someone could be living in Bangladesh and not know about cholera, "It's like something happening all around us right now."

I should know, because the hospital where I am doing my research, the International Centre for Diarrheal Disease Research, Bangladesh (icddr,b) is unofficially known throughout Dhaka as "Cholera Hospital." Like many countries in South Asia and sub-Saharan Africa, cholera is endemic in Bangladesh, occurring in relatively small numbers year round. But in late March every year, as the temperature climbs above 100°F and sources of clean water begin to dry up all over the city and surrounding countryside, a cholera epidemic ensues, with more than 500 patients presenting daily to the icddr,b hospital. Over this past week, workers have set up a giant tent -- half the size of a football field -- in the hospital parking lot to accommodate this seasonal influx of patients. Like the three other permanent rehydration wards in the hospital, each holding over a hundred patients, the tent is filled with plastic-covered cots that have a single hole in the middle and a bucket underneath (you can guess why). Nurses and doctors walk up and down the rows, day and night, working feverishly to place intravenous lines and distribute oral rehydration solution for family members to administer. 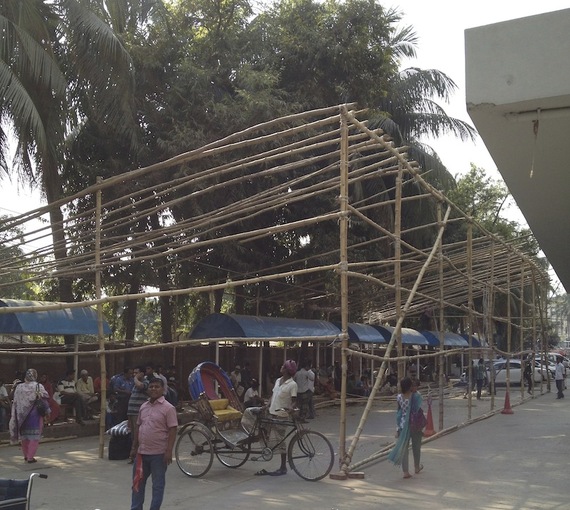 In Bangladesh, not unlike a 19th century novel, this is the time of cholera.

My acquaintance was certainly not alone in his ignorance of a disease that kills well over 100,000 people each year (1), often during epidemics in refugee camps and after disasters, as in the case of Goma after the Rwandan genocide in 1994 and more recently after the horrific 2010 Haitian earthquake. Like a host of other diseases that only strike poor people living in poor countries (which are often grouped together under the almost self-fulfilling label of "Neglected Tropical Diseases," or NTDs), cholera is not something that people born and raised in wealthy countries spend much time thinking about.

It's also not something in which wealthy governments around the world invest much of their research dollars. While patients with heart disease and cancer have benefited tremendously from the billions of dollars spent on research to develop diagnostic tests and treatments over the past few decades, patients suffering from NTDs are currently receiving diagnostic tests and treatments developed mostly in the 1940s and 50s. This is not because they can't afford better tests or treatments, but because better tests and treatments for these diseases haven't yet been invented. And they haven't been invented for two important reasons: the countries most affected by NTDs tend to lack trained researchers and an infrastructure for conducting research, and the countries with the money to fund research tend to lack interest in funding research that is unlikely to ever benefit their own taxpayers.

The situation is not completely bleak. New funders, such as the Bill and Melinda Gates Foundation, are pumping millions of dollars each year into research focused on diseases affecting the world's poorest and most vulnerable citizens. And some wealthy countries do set aside a substantial amount of funding for global health research (though they could still do much more). I am lucky enough to have a grant for my own research from the Fogarty International Center, a specific agency within the US National Institutes of Health (NIH) focused on international research. The recent sequester-related budget cuts to the NIH, however, have severely hampered the NIH's ability to provide funding for global health research in the future.

As for the lack of researchers and research infrastructure in poor countries, the answer lies in building sustainable institutions that can bring together researchers from leading universities in wealthy countries with local researchers and physicians in poor ones. icddr,b is the perfect example of just such a collaboration, employing hundreds of local researchers in Bangladesh while establishing sustainable collaborations with dozens of premier universities around the world to conduct high quality research into previously neglected diseases.

Cholera is one case in point. No effective treatment for this disease existed until the early 20th century, when intravenous saline was first developed. Intravenous saline is expensive to produce, however, and requires doctors or nurses to administer, making it too resource intensive for use in the vast majority of patients with cholera worldwide. In the 1970s and 1980s, though, a team of local and international researchers at icddr,b worked together to develop and then refine the formula for oral rehydration solution (ORS), a mix of water, salts and sugar that maximizes the gut's ability to absorb fluid and can prevent severe dehydration and death in most cholera patients. Over the past three decades, ORS has been credited with saving more than 50 million lives worldwide. (2)

So small investments in these neglected diseases can actually have big payoffs over time. My own research here, the Dehydration: Assessing Kids Accurately (DHAKA) study, builds on this prior research by working to develop new tools that can be used by nurses and doctors in poor countries to separate out the small percentage of children with cholera that require intravenous fluids from the vast majority of children who can be treated with ORS alone. We are working to develop a simple, yet accurate and reliable, clinical prediction rule for severe dehydration, as well as examining whether new imaging technologies such as ultrasound can be used to predict the severity of dehydration in children. These new tools will eventually help providers in resource-limited settings identify the most vulnerable children with cholera and other severe diarrheal diseases while also conserving precious healthcare resources. Hopefully, a small an investment in research now may lead to large savings down the line, both in terms of money spent and lives saved. 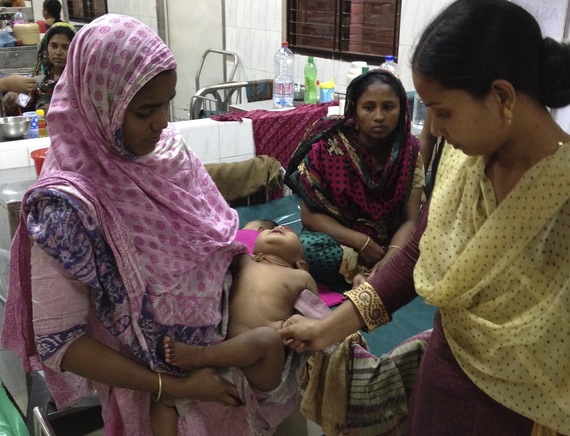 Nurse Examining a Child for Signs of Dehydration 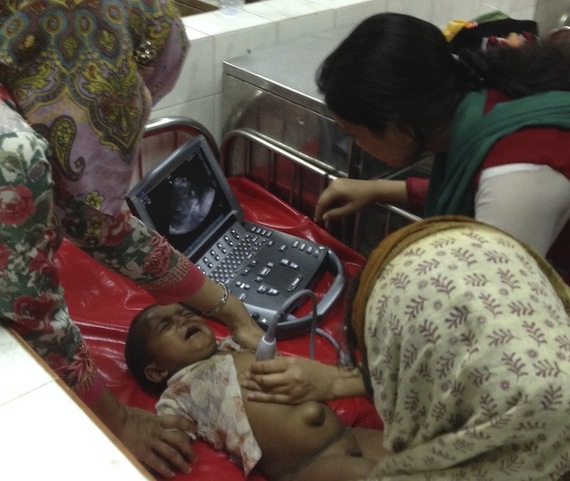 Adam Levine is an Assistant Professor of Emergency Medicine at Brown Medical School. He currently serves as the Clinical Advisor for Emergency and Trauma Care for Partners In Health-Rwanda and as a member of the Emergency Response Team for International Medical Corps. His research focuses on improving the delivery of emergency care in low-income countries and during humanitarian emergencies. The views expressed in this blog are his alone and do not necessarily represent the views of any of the organizations mentioned above.