Hurricane Katrina is forever seared in my memory, and it forever changed the perceptions and stature of the humane movement in this country - for the better. It was a moment of extraordinary turmoil and overwhelming tragedy, but it also brought the issue of animal rescue and the human-animal bond into the mainstream like never before. While many people felt the response to the humane tragedy was bungled, so many were amazed at the outpouring of organizational and individual energy and skill assembled to help the animal victims. And just days into the crisis, the American public realized that the human and animal tragedies were bound together, and they were rooting for all to survive and get back on their feet.

At The HSUS, as so many people were rushing out of the crisis zone, we were rushing in - to come to the aid of animals and the people who care about them. In the ensuing decade, moreover, we've stayed the course. We've helped a devastated region to enhance its animal welfare infrastructure. We've kick-started a number of initiatives that have produced lasting benefits for animals. We've advanced public policies on pets and disasters, and we've built up a strong emergency response and rescue unit that has answered the call in hundreds of crisis situations for animals.

When Katrina made landfall in the Gulf Coast in late August 10 years ago, she whipsawed a great American city and left hundreds of other communities in Louisiana, Mississippi, and Alabama reeling. The human tragedy was immediately obvious, with nearly 2,000 dead and hundreds of thousands displaced. Increasingly, too, the animal tragedy, at first unnoticed, came into focus, and a terrible, urgent life-or-death reality set in.

In New Orleans and the surrounding areas, many pet owners heeded evacuation orders, leaving heaps of food and big bowls of water behind in their homes. They assumed and were assured that they would be able to return home in a couple of days. Others attempted to take their animals with them, only to be forced - sometimes at gunpoint -- to abandon them in the streets before boarding evacuation buses. Farm animals were abandoned as well, left out in the fields. Then the levees failed, the streets flooded, the power went out, and the National Guard walled off what became a giant disaster zone, one in which tens of thousands of pets were trapped. It became a race against time, as we and others undertook the largest animal rescue operation ever.

Who can forget the images of animals clinging to rooftops and partially submerged vehicles, or swimming frantically toward rescue teams in boats? Local, state, and federal agencies didn't know how to respond to the animal emergency they had helped to create, and the whole world saw the result of this collective failure to address the plight of animals in disaster. Pet owners living in less affluent, underserved communities were particularly vulnerable. It was a blind spot that condemned thousands of innocent creatures to death and misfortune, and impeded the broader relief effort--and it's one of the reasons our Pets for Life program now focuses on supporting pet owners in communities that are still often forgotten.


As so many people were rushing out of the crisis zone, we at The HSUS were rushing in - to come to the aid of animals and the people who care about them. In the ensuing decade, we've stayed the course. Photo by Carol Guzy

In the immediate aftermath of the storm, we knew it was our most urgent task to help animals trapped in homes and at risk for starvation or dehydration. But at the time, we also vowed to prepare the region and the nation for future crises and to not forget about animals, to remake the legal framework on disaster preparedness and on core animal cruelty and neglect issues, and to rebuild the humane infrastructure in the Gulf Coast for the long haul, and we've made good on these promises. We talked about all of these issues at our
Animal Care Expo in New Orleans
this past March - where more than 2,300 people showed up - and we heard uplifting stories from
survivors
, remarkable news about the progress made, and information on the extraordinary collaboration between traditional and non-traditional partners. Among so many things, we've:
In the years since, we've helped to secure 20 state laws and the federal
Pets Evacuation and Transportation Standards (PETS) Act
to include animals in disaster plans. These laws have transformed the manner in which agencies think about and respond to disasters, and they are significant markers of social and political concern for animals, too.

In the years since Katrina, The HSUS has helped to secure 20 state laws and the federal Pets Evacuation and Transportation Standards (PETS) Act to include animals in disaster plans. Above, a cat rescued during Hurricane Isaac in 2012. Photo by Chuck Cook/For The HSUS

At The HSUS, the Katrina experience led us to revise our approach to emergency response. We upgraded our field response teams so that they could respond not only to disasters, but to human-caused crises such as puppy mills, animal fighting operations, and hoarding cases. During the last 10 years, our teams have deployed countless times, saving tens of thousands of animals, often coming to their rescue in areas where local animal organizations needed additional help to address their plight.

Hurricane Katrina was an unmitigated catastrophe and a heartbreak at all levels. From the vantage of 10 years, however, it's clear that it changed The HSUS, it changed our movement, and it changed our world. We can still do more for animals and the people who care about them when disaster strikes, and we will.

Pledge to take your pets with you » 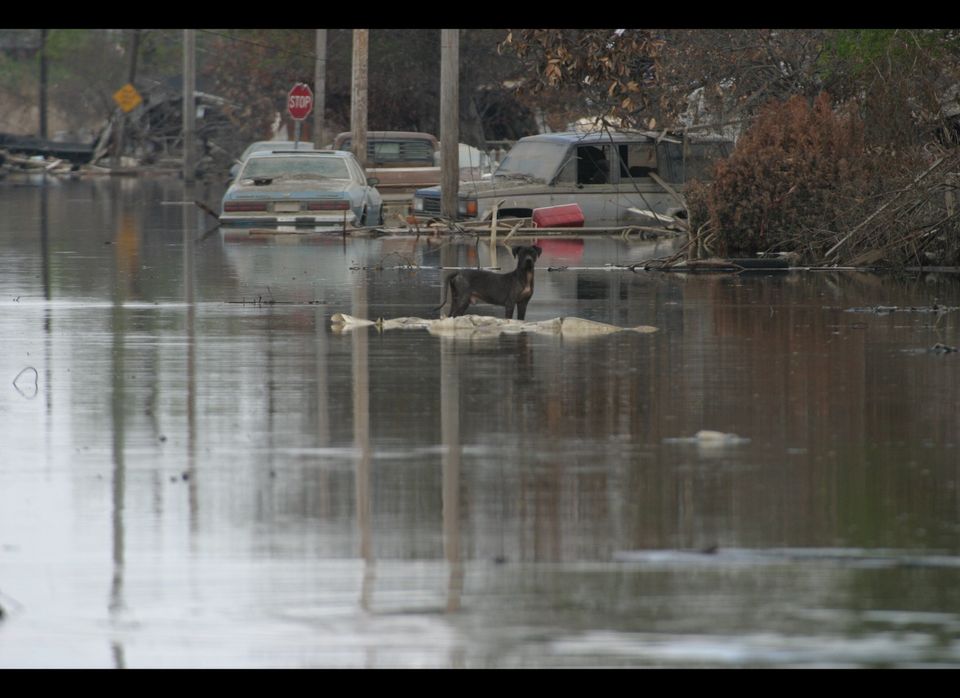 1 / 12
Since Hurricane Katrina washed over New Orleans and the Gulf Coast, The HSUS has continued helping. We have strengthened organizations and facilities serving animals in the region with tens of millions of dollars on direct response and reconstruction, recovery, and program grants.