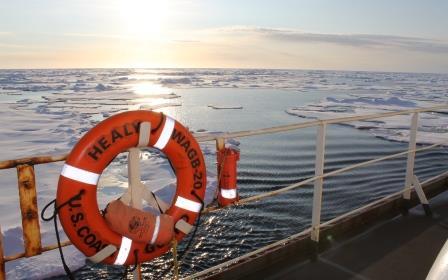 The USCGC Healy in the marginal ice zone.

Sea ice accumulates in the Arctic Ocean during the winter when the tilt of the Earth's axis leaves the top of the world in complete darkness. Ice coverage reaches a maximum in mid-March and can cover up to 80 percent of the Arctic Ocean. The sun begins to rise above the horizon by the end of March, days lengthen and the ice begins to melt. Sunlight persists for 24 hours during the summer and ice coverage reaches a minimum in mid-September before the darkness returns. The dates of the U.S. Arctic GEOTRACES expedition were selected to capture the mid-September ice minimum, increasing our chances of breaking through to the North Pole.

This week we have been sampling the marginal ice zone where the edge of the ice sheet has started to melt. Our original plan was to approach the North Pole from the east in the Canada Basin and return through the western Makarov Basin, however, satellite data from the National Ice Center (NOAA) shows ice as thick as 10 feet still occupying the east. The captain must carefully budget our 1.2 million gallons of fuel and breaking through thick ice this early into the trip would surely cut our time short. We have decided to reverse the transect and approach from the west, with hopes that the eastern passage will be clear of ice for our late summer return.

The Healy is in open water with large chunks of ice, or floes, of varying size floating at the surface. Transiting through the floes feels a lot like turbulence on an airplane. On Thursday we saw a polar bear closing in on the ship from about one mile away. I watched through binoculars as the bear jumped over ice floes and started slowly swimming towards the ship, we had to re-position before he got any closer.

Large drifting ice floes add an extra challenge to our sampling efforts. Earlier this week one of our water samplers got caught on a floe that was slowly drifting away from the ship with a surface current. The captain backed the ship up to the floe while the crew leaned over the side with large metals poles to break up the ice. The sampler was successfully recovered with minor damage to the wire. Drifting ice will continue to be a threat, especially as travel north and encounter larger floes. 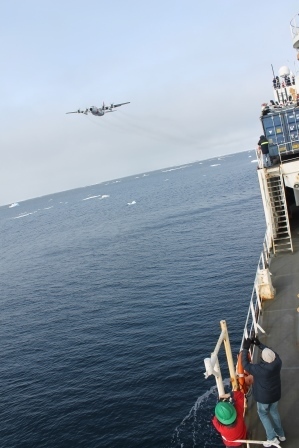 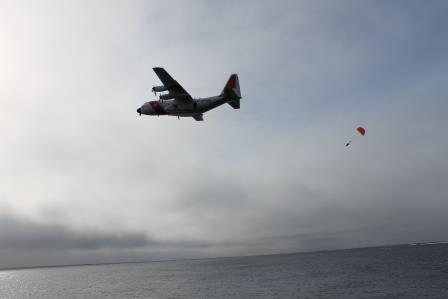 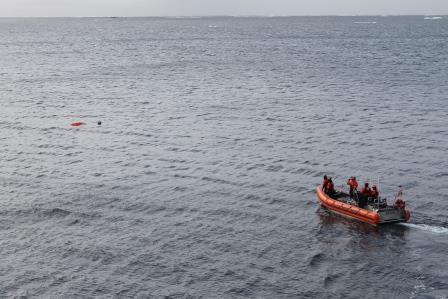 The winch used to raise and lower our main water sampler is not doing well in the cold weather. On Wednesday the Coast Guard made a special air delivery of supplies to help keep the motor running as temperatures continue to drop.