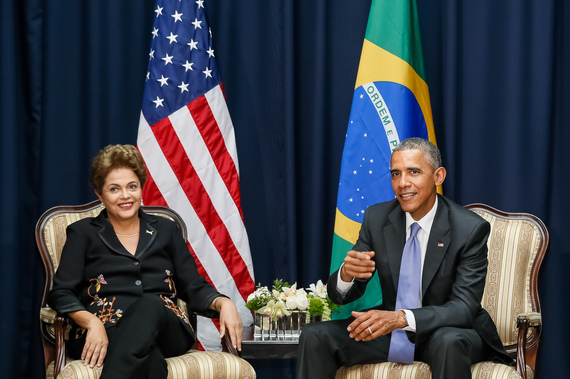 Brazilian President Dilma Rousseff's visit to the United States at the end of this month will be the fourth attempt in four years to transform a shallow dialogue marked by unfulfilled expectations, suspicion, and mutual frustrations, into the productive relationship both governments say they want to build. It may also be the most promising. It will take place at a particularly inauspicious moment for the Brazilian leader. Her popularity is at an all-time low,, and the June 19 arrests of the CEOs and senior executives of Brazil largest construction companies has deepened the crisis brought by economic mismanagement and revelations of widespread corruption at state oil giant Petrobras.

Discredited and politically isolated at home, Rousseff, who was narrowly reelected last October, has only to gain from engaging President Barack Obama in initiatives to expand and deepen Brazil's ties with the United States and turn them into solutions to the crisis of confidence - mostly self-inflicted - she confronts at home and abroad. If it is true that you know who your friends are in times of trouble, this is the time to affirm the friendship between the two largest democracies in the Americas.

The role economics played in the planning of the three-day visit suggests the Brazilian leader sees the meetings she will have in Washington, New York and San Francisco as the way to convey her understanding that rapprochement with the U.S. now is not only important, but also urgent. Rousseff actually turned down an offer by the White House to upgrade her official trip to Washington to a state visit, like the one cancelled two years ago after disclosures of National Security Agency spying in Brazil, if she could wait until next year. She could not. Fundamentally, the visit is the message.

New context favors opens for a private sector driven agenda A changed context makes Rousseff's trip to the U.S. more promising than previous efforts - assuming she survives the crisis, and expectations are kept in check. The largest investor in Brazil and principal destination of the country's value added exports, the U.S. is recovering from its own self-inflicted crisis, the 2008 financial meltdown, while China, Brazil's top trading partner since 2009, had slowed down. The likelihood of approval by the US Congress of Trade Promotion Authority to advance trade liberalization agreements in the Pacific and the Atlantic, will add to the pressure on Brazil to abandoned its protectionist policies or risk further economic isolation. It will certainly strengthen Obama's international legacy, which already already encompasses the historic initiative to normalize relations between Washington and Havana, and the expected conclusion, at the end of the month, of a U.S.-led nuclear agreement with Iran. In this new context, Rousseff's visit should contribute to improve the political atmosphere in which Brazil and the U.S. will explore anew the enormous potential of their relationship. As U.S. envoy to Brasilia, Liliana Ayalde recently observed, "Brazil and the U.S. have much in common and no unsurmountable differences."

Rousseff's situation is politically precarious. Having started her second term as a virtual lame duck, she has practically no room to maneuver and may not be able to use the visit to strengthen her position at home and advance a new, market-oriented economic policy needed to rebuild investor's confidence.

Nonetheless, her government new economic policy narrative is expressed in the mobilization of private sector leaders in both countries to focus the visit on an agenda of investment opportunities in infrastructure, human capital technology development, education, and innovation. These issues have gained ground as the crisis has exposed Brazil's obstacles to growth - they signal a return to structural and regulatory reforms abandoned after the exit of Antonio Palocci from the Finance Ministry, in 2006. There is also a renewed focus on promoting greater economic openness and integration of Brazil into the global economy. These steps are essential to improve current conditions and to move the economy to a sustainable long-term growth path, one that envisages shared prosperity under the more demanding realities of the post-commodities boom. It is also the message Rousseff will hear when leading business executives in New York, Washington and San Francisco gather to exchange views on productive U.S.-Brazil engagement.

The message is likely to be underscored by concrete proposals in key industries such as aviation, a sector in which Brazil is a global leader. The completion of two defense cooperation agreements pending ratification by the Brazilian Congress since 2010 is expected to add substance to the Brazil-U.S. rapprochement in this and other areas. The visit has been planned also to highlight new opportunities for Brazil's participation in international peace-keeping, as the country prepares to exit Haiti. It will also open space to broaden and deepen bilateral engagement on issues of global and regional relevance, such as climate change and food security. These are inter-connected issues that cannot be properly addressed without Brazil's full participation.

A continental country that is home to 15 percent of the planet's living species and a large portion of its forests and fresh water reserves, Brazil is an agricultural power expected to respond to much of the demand for food for the projected two billion extra inhabitants the Earth will hold in the next 35 years. With the clock approaching the crucial conference of the United Nations Convention on Climate next December, in Paris, the White House sees Rousseff's visit as the occasion to recognize Brazil's vital leadership role on the issue. The idea is to move Brazil to a position closer to that of Beijing, the top emitter of greenhouse gases, which has abandoned the North-South approach on global climate discussions as it addresses alarming levels of air pollution in major cities and continues to add value to its economy by updating its production systems. Brazil's impressive reduction of emissions in the past decade, achieved at a time of dramatic increase in its agriculture productivity and output, shows that the country has a good story to tell on climate and interest to lead by example on the issue, seen as a priority by a large majority of Brazilians. The world's largest Catholic country, Brazil now has even Pope Francis' encyclical on climate change as an incentive to be proactive. The question is whether the Brazilian government, which has been internally divided on the issue, has the will and the capacity to lead - an activity Rousseff has shown little appetite or talent for during her first term in office.

Regional and international security are also on the agenda. So are the more immediately meaningful themes of democracy, freedom of expression and human rights in the Americas. Rousseff has praised Obama for his initiative to abandon Washington's failed policies to isolate Cuba. Referring to the persecution of opponents by Venezuela's government, she has reminded an audience at last April's Summit of the Americas that in Brazil citizens can protest without fear of reprisal, event in support of her impeachment. To her credit, the Brazilian president has been consistent in the defense of freedom of expression and has objected to efforts by leaders of her own Workers' Party to impose so-called "social controls" on media. A former victim of torture herself, Rousseff has a clean, if at times timid, record on human rights. The question is whether she can summon the courage of her convictions and, with Barack Obama at her side, urge leaders such as Venezuela's Nicolas Maduro to stop political persecution of adversaries and look to Brazil for inspiration and guidance. This is exactly what an official delegation of Brazilian senators tried to convey to the Venezuelan authorities on June 18 before being rebuffed by Bolivarian government- an unwise move that will exacerbate congressional pressure on the government to take a stand.

Problems at home could frustrate a promising relationship

The arrests of the CEOs of leading construction companies involved in the Petrobras scandal, including that of Marcelo Odebrecht, whose family controlled global conglomerate has operated in the U.S. since the 1990s, has tacitly put the topic of corruption on the agenda of the visit. Brazilian federal investigators have asked for U.S. authorities cooperation to trace bribes Odebrecht and construction company Andrade Gutierrez allegedly paid abroad to win contracts. Petrobras, which operates in the U.S. through a Texas-based subsidiary, is the target of two investigations by American authorities. Rousseff should come to the U.S. prepared to speak about the scandal. As difficult and untimely as the new allegations of corruption may be for the Brazilian president, who chaired Petrobras board of directors at the time of the alleged assault on the company, the manner by which it has been confronted by the country's federal authorities, charged with advancing the rule of law, reflects the impressive institutional progress Brazil has made in three decades of democracy and should be highlighted by the president.

Rousseff should also be prepared to speak intelligently about the Iranian nuclear agreement, which, by sheer coincidence, is supposed to be finalized on the day she visits the White House. Assuming Washington and Tehran will be close to a deal, Rousseff should use the occasion to praise Obama for his efforts to defuse the most serious international security threat of the past four decades. The peril here is that, unprepared, she could be tempted to claim some credit for Brazil by reviving the memory of former president Luiz Inácio Lula da Silva's failed attempt to mediate between Tehran and the international community in May 2010, alongside Turkey - an episode remembered in Washington and other capitals as a fiasco that has seriously undermined the credibility and effectiveness of Brazilian diplomacy and tossed Brazil-U.S. relations into the hole from which it is still emerging.