Exactly one week after the attempted assassination in Tucson of Rep. Gabrielle Giffords, Pima County, in which Tucson is located, is hosting a gun show. And not just any gun show: according to blogs on the right, Crossroads of the West is in Tucson having been "thrown out" of "radical" jurisdictions like Los Angeles County.

The L.A. County supervisors decided that Crossroads was a den of domestic arms dealers inciting irresponsible gun use in the nation's largest county. So Crossroads fled across the border to open in Tucson. Its logo: crosshairs. Nice symbolism. Good timing. 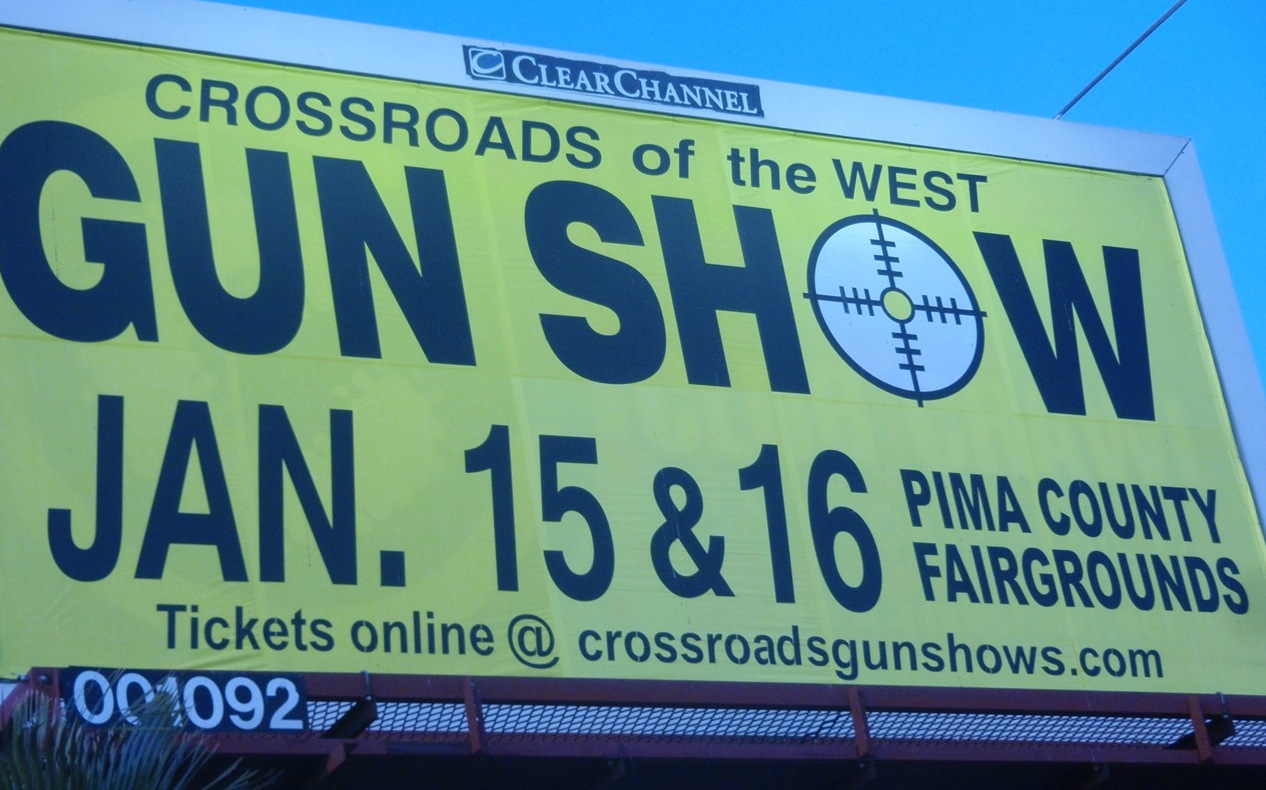 It's not surprising that the gun show is taking place here.

Perfect conditions for an armed catastrophe.

Pima County where the shooting actually took place isn't liberal like Tucson. When Giffords held a healthcare town hall in summer 2009, many Pimans commuted to it just to spew their bile. Then, during the 2010 midterm election campaign, won by Giffords with only 4,000 votes (about 1% of those voting), her opponent, Jesse Kelly -- a neanderthal businessman and would-be destroyer of government -- threw a fundraiser featuring a chance to fire an M-16. It's meaning was not lost. His official "I hate Washington" theme was frequently conflated, often intentionally, with the "I hate Giffords" message spread by his more extreme supporters.

Kelly got additional support from Koch Brothers-funded hit ads. And post-election ads run by Karl Rove have persisted right up to the time of the shooting. As a result, Giffords, one of the most likable members of Congress, paradoxically has two followings: one that knows her and loves her, and one that doesn't do either.

Giffords herself defends the right to bear arms. As she herself famously said during an interview, "We live in a gun culture [in Arizona]." It's impossible for a politician to say otherwise in Arizona. The NRA controls the legislature. Perceiving a threat to its hegemony, it can quickly muster hordes of rabid gun owners fearful of every threat, real and imagined, to threaten anyone. The legislature made it legal to carry a concealed weapon into a bar and soon it will be the same for our schools.

There's no law corresponding law to prevent a crazy person from buying a gun, however. Walmart will sell you the bullets, even in your crazy state, for 22¢ apiece. "Save money. Die better." The gun show crowd denies Jared Lee Loughner's affiliation, but they buy their guns and ammunition in the same shops and in the same quantities. Ed Schultz reports that sales of the Glock 19, Loughner's killing machine, are up 60 percent since last week's fatal attack on Giffords and her audience.

Given the current turmoil and hard feelings, is this the best time to have a gun show just down the road from where a political assassination was recently attempted? Of course not. It's an invitation to disaster. You'd think there would be a public outcry about this travesty.

What will it take to postpone the Crossroads gun show? Another assault with a gun? No problem there, one happens every day. Another murder? There probably was another one (or more) in Pima County this week. Another murder of an elected official, God forbid? Would even that suffice to delay the gun fetishists' ecstasy -- and the drug dealers "up-arming" with the latest technology of death?

Apparently not. I asked the local Southwestern Fairgrounds Commission, Inc., a privatized former organ of government that runs the Fairgrounds, primarily to make a profit, if it would postpone the show. I'm still waiting on a reply. The same question was put to Crossroads of the West. it replied, "Please come visit, the show's going on." The show must go on. Even if it results in arming another political attacker, as is now likely the case.

So far the local press has been either unaware or unconcerned about this situation. Our major daily, the Arizona Star, seems to have missed the irony of the event (though not its advertising). Fortunately community activist David Abie Morales, in the TucsonCitizen.org, ois spreading the word. Our TV outlets are "bleed and read" and the AM radio is all evangelicals, rightwing shock jocks, and (a nice contrast) mariachi music. Public radio here is basically automated and the community radio station, a virtually autistic organization of vanity DJs.

National coverage, too, has been focused on last week's killing (and since Wednesday, the President's call for civility -- already forgotten by the armed contingents), not the imminent potential for killings inherent in a gun show being held on the one-week anniversary of the most heinous assault and murder in Tucson's long history.

The billboards are everywhere to be seen. The gun show producers, real straight-shooters (no pun intended), are not modest about plying their trade in human destruction. Which national or local leader will have the courage to prevent this travesty before another victim -- or many victims -- suffer mayhem and even death at the hands of a latent copycat killer armed with a gun, perhaps at the Crossroads? So far none has answered the call. Who will take action?

Why are individuals like Loughner and other authoritarian, often paranoid personalities so plentiful in this land of the brave? See my Huffington Post article, "The United States of Abuse," July 7, 2010, for a persuasive sociological explanation.

It's all well and good to be concerned for how we treat the mentally disturbed -- poorly -- but why don't we pay more attention to what makes them that way in the first place: a shocking national epidemic of child abuse in America --psychological, physical, and sexual?

Today we learned that Loughner's father threatened his son's life with a vehicle on the morning of the shooting. And for how long before that? Until we deal with abuse in our culture, the cycle of hurt, humiliation, alienation, and violence will remain inevitable and perpetual.