On March 1, the Welsh people will be wearing either leeks or daffodils in celebration of their Dewi Sant, or St. David, who died on March 1, 589 A.D. Leeks might seem a strange choice, but in Welsh, "Cenhinen" means leek and "Cenhinen Pedr" means daffodil. The similarities of the two words have resulted in both plants being adopted as national symbols. As for leeks, you won't just find this smelly member of the onion family on St. David's Day: Welsh rugby fans wear a leek to every international match.

The history of the leek as it relates to Wales goes back at least 700 years. In Shakespeare's Henry V, the King says he is wearing a leek "for I am Welsh, you know, good countryman." Even earlier, there are entries in the household accounts of the Welsh Tudor Kings of England that record payments for leeks worn by the household guards on St. David's Day. Today, the leek appears as the cap badge of the Welsh Guards, a regiment of the British Army. 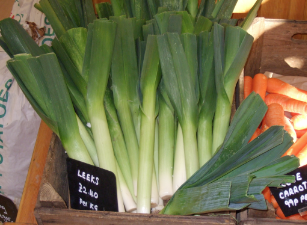 "Cenhinen Pedr" translates as "Peter's Leek." Why a leek? One legend has it that during an ancient battle taking place in a leek field against the hated pagan Saxon invaders, the two opposing uniforms were so similar that St. David commanded his soldiers to wear a leek on their helmets. Since then, the leek has been a symbol of Wales. Even the 1985 and 1990 British one pound coins bear the design of a leek in a coronet which represents Wales.

St. David, now associated with the leek, was born into an aristocratic family on the South West coast of Wales. According to one legend, an angel foretold the birth of David to St. Patrick 30 years before it happened. It is said that David's mother gave birth to him during a violent storm, on top of a cliff, and the delivery was so intense that she left her finger marks on a rock she was clenching. The moment David was born, a bolt of lightning split the rock in two.

Brought up by his mother, David is said to have been baptized by St. Elvis of Munster. It is said that a monk holding David during the baptism was cured of his blindness after drops of water splashed into his eyes. Educated at a monastery and considered blessed, David was sent off as a missionary to convert the pagan people of Britain. He founded religious centers in Wales, England, and in Jerusalem, where he was made an archbishop.

David settled in southwest Wales where he established a religious community at Glyn Rhosyn, now called St. David's. When he died, he told his followers, "Be cheerful and keep your faith and belief, and do the little things that you have heard and seen through me." His remains, buried in the Cathedral of St David's in Pembrokeshire, became a popular place of pilgrimage and it was said that one pilgrimage to St David's was the equivalent of one to Rome and three to Jerusalem. 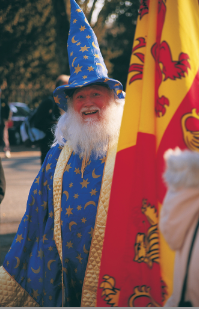 If you happen to be in Wales http://www.visitwales.com March 1st on St. David's Day, attend a special concert and join one of the processions, but be sure to wear a leek or if that's too smelly for you, substitute a daffodil. Whichever of the two symbols you choose, turn to the Welsh person nearest you and say, "Hapus Dydd Gŵyl Dewi."