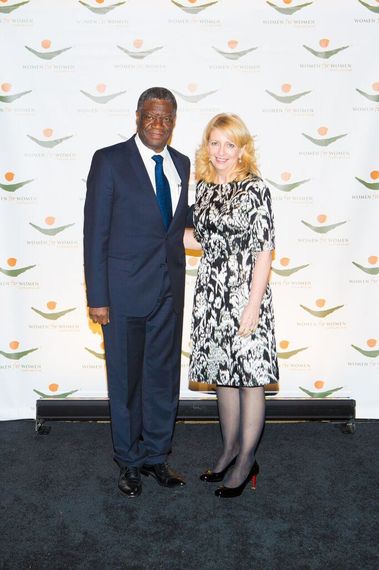 For almost 20 years, Dr. Mukwege has treated patients who have survived serious injuries from sexual violence perpetrated as a tactic of war in the Democratic Republic of Congo (DRC). I've visited the Panzi hospital he founded in 1999 in the eastern part of the country. It's a beautiful part of the world, with lovely hills and a serene, picturesque lake.

The peacefulness belies the horrors that have taken place there. Countless women have come to Dr. Mukwege as a last resort after combatants, bent on destroying their bodies, raped them, sometimes with machetes and guns. The women and girls, some incredibly young, come to Dr. Mukwege's hospital to be put back together.

Because of what he's seen as a surgeon, he has become an international advocate, traveling around the world to bring attention and action to end the violence in the DRC.

Because of what he's done as an activist, his life is often in danger. Dr. Mukwege had to flee the DRC after an assassination attempt in 2012. He came home only after Congolese women convinced him to return.

Earlier this month, I sat down with Dr. Mukwege in New York to talk about his work and the broader issue of sexual violence in conflict. Below are excerpts from our conversation.

Ambassador Russell: You started as an OBGYN back in the 1990s. What led you to become an activist working to end sexual violence?

Dr. Mukwege: When I started as an OBGYN, my goal was to fight against maternal mortality. But the first patient I treated at the hospital came because she was very tortured. For me it was a strange thing because I had never witnessed a case like that. And at that moment I thought that it was just a crazy man who did it. But, after three months we treated 45 patients [who had been raped]. Then I started to understand that it was really something new within the region. It was really a new pathology in the region. And there, I shifted from OBGYN and became a surgeon.

Ambassador Russell: And an activist?

Dr. Mukwege: I started to ask myself why this is happening in this region and no one is acting. So I made contact with the Human Rights Watch. They were the first to act. But we didn't get a response from anyone else.

I started to feel like I can't spend my whole life in the operating room. I operate on a mother who was raped, and now I'm operating on her daughter. I needed action to stop this. So now I'm using some of my time to focus as an activist to say, enough is enough.

Ambassador Russell: One of the things I struggle with is trying to understand why sexual violence happens in some conflicts and not in others.

Dr. Mukwege: My question is, how people can just make a decision to destroy others. Why do people decide to rape children, abuse children? Why can they do things like that?

The second thing is that you can't rape one hundred, two hundred, three hundred women in one night, without planning it.

When I started to talk with some perpetrators, they said, "We got an order from the commander to rape women." And it's clear that some of them have not only been soldiers but also victims. They are given guns and told, "With this gun, you can get food. You can get women. You can get money."

Ambassador Russell: Do you think that communities can come back from that? Can the community heal when something like that happens?

Dr. Mukwege: This destroys the public, the social public. For example in some places the [wife of the] priest or the pastor was raped and the population refused to come to the church, because why should you go into a church where the wife of the pastor was raped in the church? It's a way to destroy population, and to show the power, to show that you are nothing, to deny the humanity.

Ambassador Russell: The saddest thing I saw at your hospital when I visited was a little girl, maybe 3 or 4 years old, and I assumed she was the child of one of the patients. And then you told us that she was a patient herself. I heard you say before that young children were raped, but I somehow couldn't picture it. When I saw her, and I tried to imagine what happened to her, I thought that there's just some sort of depravity here. That's beyond the realm of what we're used to seeing. And I can't shake that.

Dr. Mukwege: Most of the children aren't raped in their home. They're raping them out of the home and bringing them back. It is a way to traumatize a family. To rape and bring them back, for me it's clear that their goal is to show that you are nothing and that I can do everything that I want.

Ambassador Russell: I'm going to end on a bright note. Despite all the terrible things that have happened to them, the women I met at your hospital found some way to move forward. Obviously, you helped them with the surgery, so they can be restored as much as possible physically. But they were looking to move forward in their lives, to take care of their families. It's hard to know how you find the strength to do that. But it did feel to me like there was some joy at the hospital. These women found some way to move on and move past what happened in some ways. Is that your sense of what goes on?

Dr. Mukwege: When we started to treat women, we thought that to restore them physically, it was enough. But with experience we saw that after they were restored physically, some of them will just go through and feel sad. So we started to support them through socio-economic care.

Their big question is how to send their children to school, but we can't pay for school for everyone. And so we support mothers who have children and want to support their family. We have a system of microcredit and different kinds of support for them.

And the last thing is the legal assistance. Some of them ask us to support them and to go to the court with them. And this is really a process of healing. It's important to understand the problem and how to solve it with a victim, how to support the victim so she can become a survivor. And in this way, it's giving many women hope to be at the hospital and to see how others overcome and how they are supporting their own family.