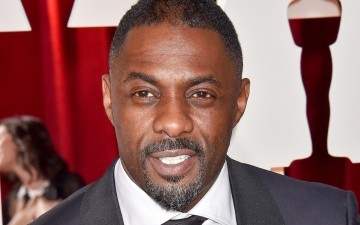 Perhaps newly minted James Bond author Anthony Horowitz is too wrapped up in his own work. This suspect scribe must think that he (like the spy hero he now writes about) wields an uncanny knack to speak in impenetrable codes.

Sadly, as I'm sure Bond characters from Miss Moneypenny to May Day would concur, he's dead wrong. Horowitz--whose debut contribution to the legacy, Trigger Mortis, is due next week--now finds himself embroiled in online controversy. Horowitz deemed the undeniably handsome Idris Elba "too street" and rough to portray the stealthy character whose shaken, not stirred martinis and love of luxury cars have made him both a literary and box office legend.

According to an interview with the Daily Mail, the following slipped from Horowitz's lips: "For me, Idris Elba is a bit too rough to play the part. It's not a color issue. I think he is probably a bit too 'street' for Bond. Is it a question of being suave? Yeah."

Not suave? Has this stooge ever seen Elba? Like, ever in life? Like, even on his worst day? If he hasn't, that's the only plausible explanation for his ridiculous remarks about the actor who first stole our collective heart as Stringer Bell, the legit-seeming, clingy-sweater-rocking drug kingpin on HBO's The Wire.

Horowitz couldn't possibly mean the Elba who reduced Michael Scott to a Men's Warehouse refugee when he glided onto the set of the U.S. office as a grumpy, yet gorgeous addition to the team.

Nor could he mean the man who has spawned a multitude of memes, including a testosterone-teary poem entitled "I'm Sorry I'm Not Idris Elba."

Elba attracts just as much envy and admiration as any actor in his category, specifically because he is so smooth. And that includes Mr. "Hey, Girl" himself, Ryan Gosling.

Now, let's backspace a bit to the part about "street"--which anyone but a pure and certified fool would recognize as a slam against Elba's Blackness. Even Horowitz must suspect this, hence his hasty tack-on that "it's not a color issue." That's the equivalent of beginning as sentence with "I'm not racist, but..." (Word of advice: Never. Ever. Follow the "but.")

No shade whatsoever to the current incumbent, Daniel Craig, who seems like a nice enough guy, yet let's not pretend that Craig (who bears a passing resemblance to the Mad magazine mascot Alfred E. Neuman about the head) is some elegant gentleman caller.

Indeed, had Horowitz also panned Craig in favor of the arguably more gentlemanly (yet equally arguably less effective) iteration of Pierce "Remington Steele" Brosnan, he might have received a pass for his casting commentary.

Yet, the author-turned-enemy-of-the-state rubber stamped Craig with a "terrific."

The good news is, Horowitz has just as much chance of getting away with this insult as a Bond villain does after he reveals his nefarious plan. The Twitterverse is taking care of him as we speak, God rest his eternal, whitesplaining soul. Horowitz just better hope that his writing "skills" are far superior to his interviewing acumen.

Otherwise, he might get replaced before the current Bond.